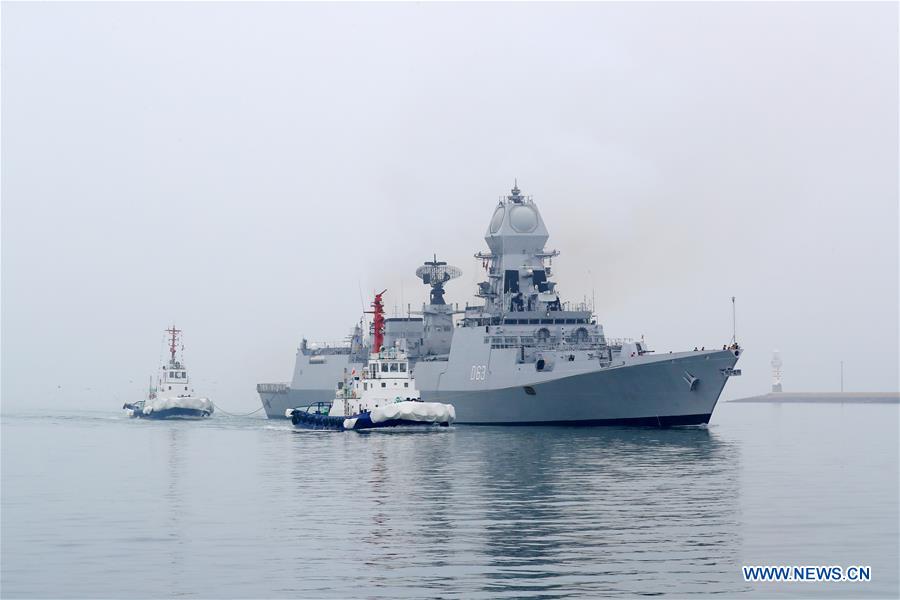 Naval vessels from multiple countries arrived in Qingdao, East China's Shandong Province on Sunday to join the upcoming Chinese maritime parade in celebration of the People's Liberation Army (PLA) Navy's 70th anniversary on Tuesday, where the host will debut its new warships.

More than 10 warships from countries including the Philippines, Japan, Vietnam, Australia, India, South Korea and Russia arrived in Qingdao on Sunday for the PLA Navy celebrations.Chinese naval vessels started to assemble even earlier, as local residents started to post photos of ships, including destroyers and frigates, on Chinese social media three weeks ago.A meeting to celebrate the PLA Navy's 70th anniversary was held Sunday in Beijing, where participants recalled the navy's history, looked into the future and honored groups and individuals who made significant contributions to the PLA Navy in the past seven decades.New warships to debutA total of 32 Chinese vessels and 39 Chinese aircraft will be a part of the parade, said Qiu Yanpeng, deputy commander of the PLA Navy, at a press conference held on Saturday ahead of the anniversary.China's first aircraft carrier the Liaoning, new nuclear-powered submarines, new destroyers and aircraft will participate in the fleet review. Some vessels will make their public debut, Qiu said.The Type 055, China's first 10,000-ton class destroyer, will very likely be commissioned and make its first public appearance, a military expert who asked not to be named told the Global Times on Saturday.A new model of the Type 093 nuclear-powered attack submarine may also debut, and there is a small chance that the more advanced Type 095 nuclear-powered attack submarine could be on show, the expert said.The warships will form six groups during the fleet review: a submarine group, a destroyer group, a frigate group, an amphibious landing ship group, an auxiliary ship group and an aircraft carrier group, Qiu revealed.Ten aircraft formations will include an early warning aircraft formation, a reconnaissance aircraft formation, an anti-submarine aircraft formation, a bomber formation, a fighter formation, an aircraft carrier-based fighter formation and a vessel-based helicopter formation.A dozen or so countries will send about 20 naval vessels including destroyers, frigates and amphibious landing vessels to join the parade, and more than 60 countries from five continents will send naval delegations, with more than 30 of them featuring major naval leaders, Qiu said.While the fleet review will be held on Tuesday, the whole celebration will last from Monday to Thursday. It includes high-level seminars, joint military musical performances, and cultural and sports exchanges.Not a muscle showAs navies from all over the world gather in Qingdao to celebrate, some foreign reports have falsely claimed the parade aims to show China's naval prowess.Reuters reported on Saturday that China "is flexing its increasingly well-equipped military muscle" through the naval celebration.In response to the Reuters report, Zhang Junshe, a senior research fellow with the PLA Naval Military Studies Research Institute, told the Global Times on Saturday that the planned demonstration of China's naval vessels is an indication that the PLA Navy is becoming more open and transparent.Zhang stressed that the Chinese parade is not a show of military muscle. He said that as early as the 14th century, the UK started holding maritime parades, and other countries have begun to hold these ceremonial activities since then, so some other countries should not apply double standards here."Showing these weapons and equipment so close-up to foreign counterparts indicates that nothing is hidden. This act shows that we are not hostile and that the PLA Navy's wish to safeguard world peace and stability [is similar] to other navies around the world," Zhang said.A force for peaceQiu also said at the press conference that it is essential for China to build a strong navy because between 1840 and 1949, China was invaded more than 470 times from the sea, which resulted in deep suffering for the Chinese nation.By comparison, the PLA Navy has never caused any war, turbulence or unsettlement anywhere in the world, Qiu said."China has stepped into a new era which provides both unprecedented opportunities and challenges. Security conditions, especially at sea, are becoming more and more severe," said PLA Navy Rear Admiral Yang Yi, noting the US has increased its military presence around China and has been challenging China's sovereignty and territorial integrity in the name of so-called freedom of navigation.Yang called for the development of a blue water navy that can mobilize to the high seas anywhere in the world and control waters where it matters to China's core interests.Qiu stressed that the PLA Navy is always a force for peace, and its growth has contributed more and more to the security of the world.Since 2008, the navy has sent 32 escort fleets, 103 vessels, 69 helicopters and more than 27,000 officers and soldiers to escort over 6,600 vessels, more than a half of which were foreign merchant ships, the Xinhua News Agency reported on Sunday. Since 2010, the naval hospital ship Peace Ark has traveled to 43 countries and regions and provided free medical services to over 230,000 people, the Xinhua report said.Yang said China will become a world-class naval power by the middle of the 21st century, but it will not walk the old path of hegemony and gunboat diplomacy.China is willing to cooperate with any country's navy that is willing to cooperate with China in making continued efforts to protect world peace, the Chinese rear admiral said.