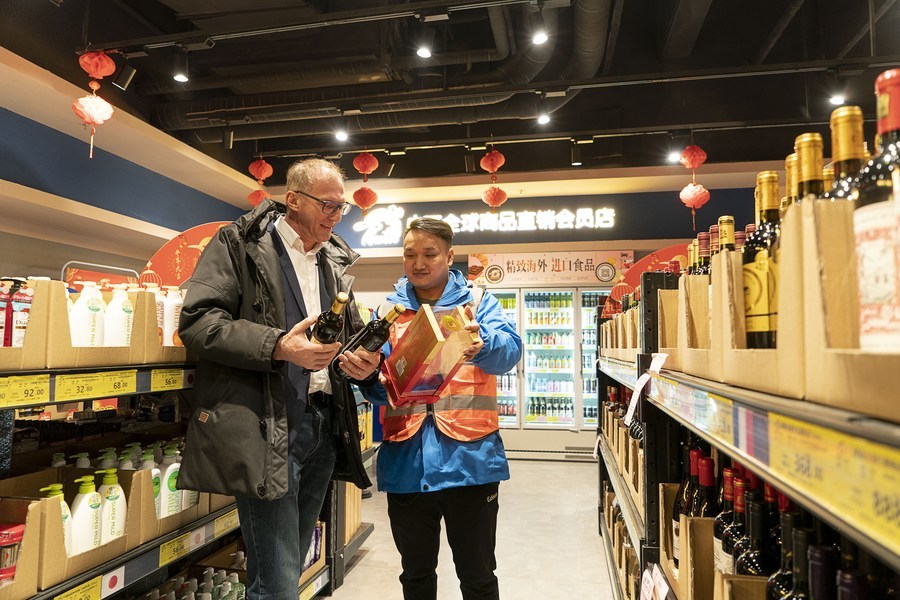 French doctor Philippe Klein has worked in central China's Wuhan for seven years, but this was his first year to celebrate the Spring Festival in the city.

Klein did not have an emotional connection with the locals in years past, but now everything has changed. "Maybe because of the pandemic, now I have more and more solidarity with Wuhan people," he said.

Klein raised his glass for a New Year's toast during a reunion dinner with his family, Italian professor Sara Platto and her son Matteo, Israeli blogger and entrepreneur Raz Galor, and their friends in Wuhan. This bittersweet moment marked the end of the group's six-day "adventure" to celebrate the Chinese New Year.

While immersing themselves in the exciting preparations for the coming Year of the Ox, the expats got the chance to experience the reignited spark of the city once hit hard by COVID-19. 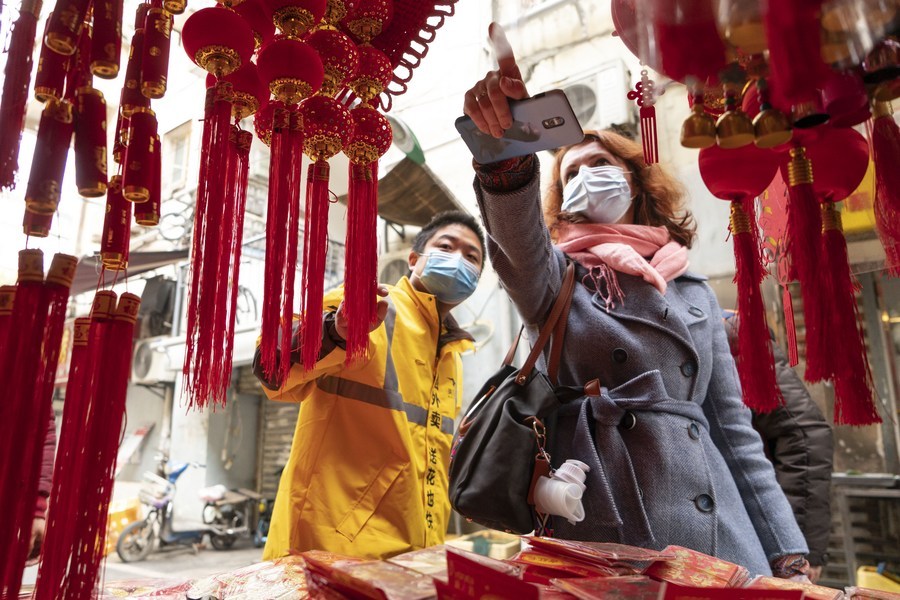 With red banners and lanterns hanging on every street, Platto and her son Matteo strolled along Hanjie Street to buy some new clothes for the new year. Meanwhile, Klein drove to the supermarket close to his home to pick up a bottle of wine and was accompanied by Wuhan local Zhong Weiwei, a construction worker who helped build Leishenshan Hospital, a makeshift structure designed to house COVID-19 patients.

Festive vibes spread throughout the supermarket with joyous songs playing, discounted goods on display and plenty of colorful decorations dangling from the ceilings. After having their health codes checked and temperatures measured, Klein and Zhong queued to buy the wine and Chinese spirits.

The bustling scene caused the two new friends to recall how hard the last Chinese Lunar New Year was. Wuhan was in an unprecedented lockdown and was facing the tough task of curbing the transmission of the novel coronavirus.

The 57-year-old Frenchman refused to evacuate from Wuhan despite all the uncertainty, the fear and the pain from being separated from his family who flew back to France. "I am a doctor. It's my duty to help people here," he said.

At the peak of Wuhan's epidemic, Klein received a permit which enabled him to move freely in the city to treat patients at their homes. "It was unforgettable. I remember driving alone with nobody else on the roads but the ambulances," he recalled.

Zhong also stayed in the city and did not return home for his family reunion. Instead, he decided to join the workforce which was responsible for building the two makeshift hospitals for COVID-19 patients.

"Last New Year's Eve, all I did was slurp a bowl of instant noodles and hurry back to work." Zhong also went on to explain how he slept for no more than three hours a night for weeks on end. "The feeling that our country was in danger and the mutual goal and determination everyone had to build the hospital fueled and encouraged me."

More than 40,000 construction workers across the country like Zhong completed the job of building two hospitals in two weeks, providing 2,600 beds for severe and critical COVID-19 patients.

"Zhong is the real hero of this adventure," said Klein. "It was really important to bring such a hospital in this pandemic, and they did it very quickly. I think the rest of the world will never forget this," he said.

Thanks to a series of swift and effective measures put in place, Wuhan has not reported new locally transmitted COVID-19 confirmed cases since May 18, 2020.

As the Chinese New Year is just around the corner, the homes of Wuhan residents are once again filled with the shuffling noises of mahjong tiles, belly laughs and the tantalizing fragrance of home-cooked dishes and local delicacies. 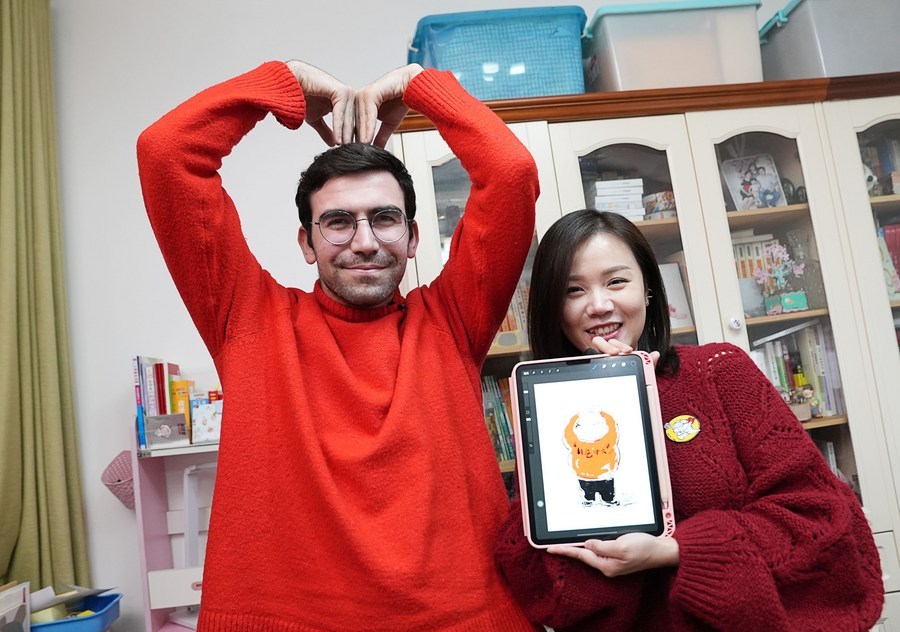 Galor on the other hand was back in Israel during last year's Chinese New Year, and he was in no mood to partake in his usual hotpot-eating tradition. Instead, he was busy gathering medical supplies to be sent from his motherland to the hospitals in Hubei.

He also had his hands full with another important task: fighting the anti-Chinese discrimination in the media.

The Beijing-based Israeli at that point felt compelled to produce content "to make audiences more aware of the scientific situation rather than a cultural situation where people are blaming others and being discriminatory."

"We need more positivity and less hate and blaming," he said.

During that dark period, Li Jing, an illustrator in Wuhan, was one of the locals who contracted the virus and was admitted to a temporary hospital.

"I was transferred to a makeshift hospital, which used to be a gymnasium. Before I got there, I thought it was going to be in a bad state and they would have a lack of medics. But it was the opposite, it was really great," said Li.

She also recalled how the doctors and nurses took good care of the patients, and how every patient was given the appropriate care.

As Li was recovering, she began to draw cute pictures of doctors and patients going about their daily routines and published her artwork on various social media platforms, which was met with a positive response.

"Her artistic skills are amazing, but what impressed me more is her pure optimism in the face of danger," Galor said.

"She was under a lot of uncertainty in the peak of the pandemic, and despite all of this, she managed to find a beam of light in herself to make the situation a bit more positive," he added.

For Platto, an Italian professor at Jianghan University, last year's Spring Festival was also one she will never forget. "When the lockdown in Wuhan began on Jan. 23, it was Matteo's birthday," she said.

The mother-of-one had to act quickly and changed her son's birthday plans. She ended up buying a cake and they moved the party from an in-person event at home to online -- potentially making it one of the first online birthday parties amid the pandemic.

During the months-long lockdown, Platto relied heavily on deliverymen for her daily necessities and groceries. "While we stayed safe at home, deliverymen were risking their lives every day to deliver food and provisions to hospitals and the rest of the city. They are the heroes of this pandemic," she said.

Back then, Platto would never have imagined that one year later, she would be shopping for clothes and groceries with one of these heroes, now her new friend, Peng Zilong. 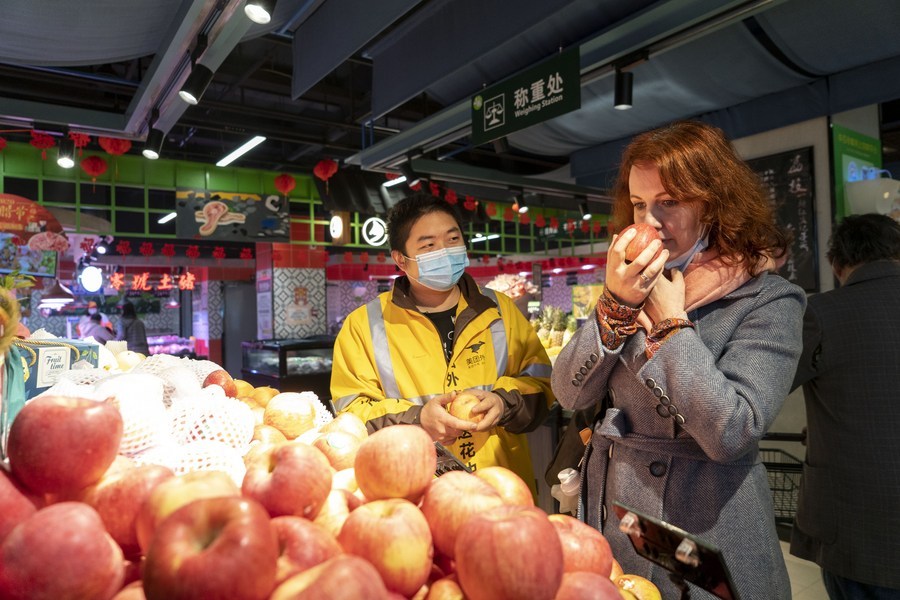 Last year, Peng, a 30-year-old deliveryman, volunteered to bring meals and daily essentials to hospitals across Wuhan, and this year he decided to stay in the city. Due to the workload during the Spring Festival holiday, not everyone could go home.

To continue to combat the epidemic, Chinese people have been encouraged to stay where they are during the Spring Festival this year. Data from Wuhan Tianhe International Airport showed that the number of passengers traveling in and out of the airport has dropped by more than 60 percent compared with the same period in 2019.

"I think Chinese people's ability to sacrifice their own good for others is quite obvious, not just in Wuhan, and even now people sacrifice themselves by not going home, which is something that they want so much," Galor said.

Having gone through so much during the peak of the battle against COVID-19, Wuhan people rose to the challenge and worked together to overcome many obstacles in their path. But what lies ahead for these foreigners and locals, and what are their Chinese New Year wishes?

As the epidemic waned, Li quit her job as an illustrator and became a full-time artist. "There was a moment when I was in the makeshift hospital, where I suddenly felt reborn," said Li.

"I then realized that I have so many messages I want to communicate and so I hope I can spend more time creating art that will bring a smile and strength to others," she added. 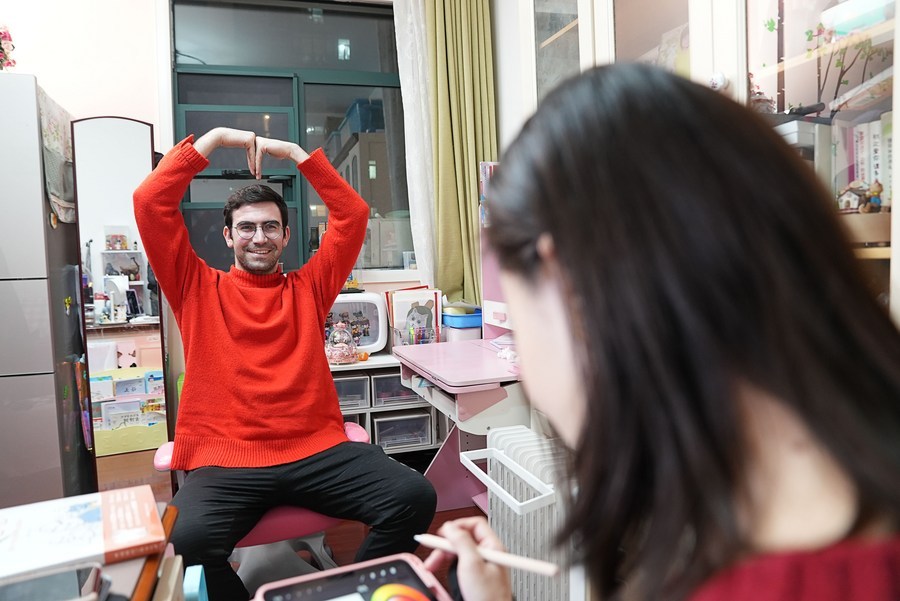 Zhong and Peng, who are both self-professed workaholics, would like to spend more time with their loved ones. "I realized how little time I've spent with my family and I wish to have more time with them in the new year," said Zhong.

Both Klein and Platto developed a deeper connection to Wuhan during the crisis and they now fully embrace the city they call their second home.

"My relationship with the city is like a friendship. During the pandemic, the lockdown, I decided to stay here. Therefore, my friend [Wuhan] became family, and that is what I feel about Wuhan now. It's like family," said Platto.

In July 2020, the professor published a book titled "Buongiorno, Wuhan" to share her son's experience during the epidemic as a way to introduce the city to her readers.

"I really would like people outside of China to really see what Wuhan is, not relating Wuhan to the virus, but to appreciate the city for what it really is," Platto said.

Klein echoed Platto's sentiments. "I hope that human beings won't remember Wuhan as the city of the virus, but the city who fought the virus and won against the virus with solidarity, courage and intelligence," he said.