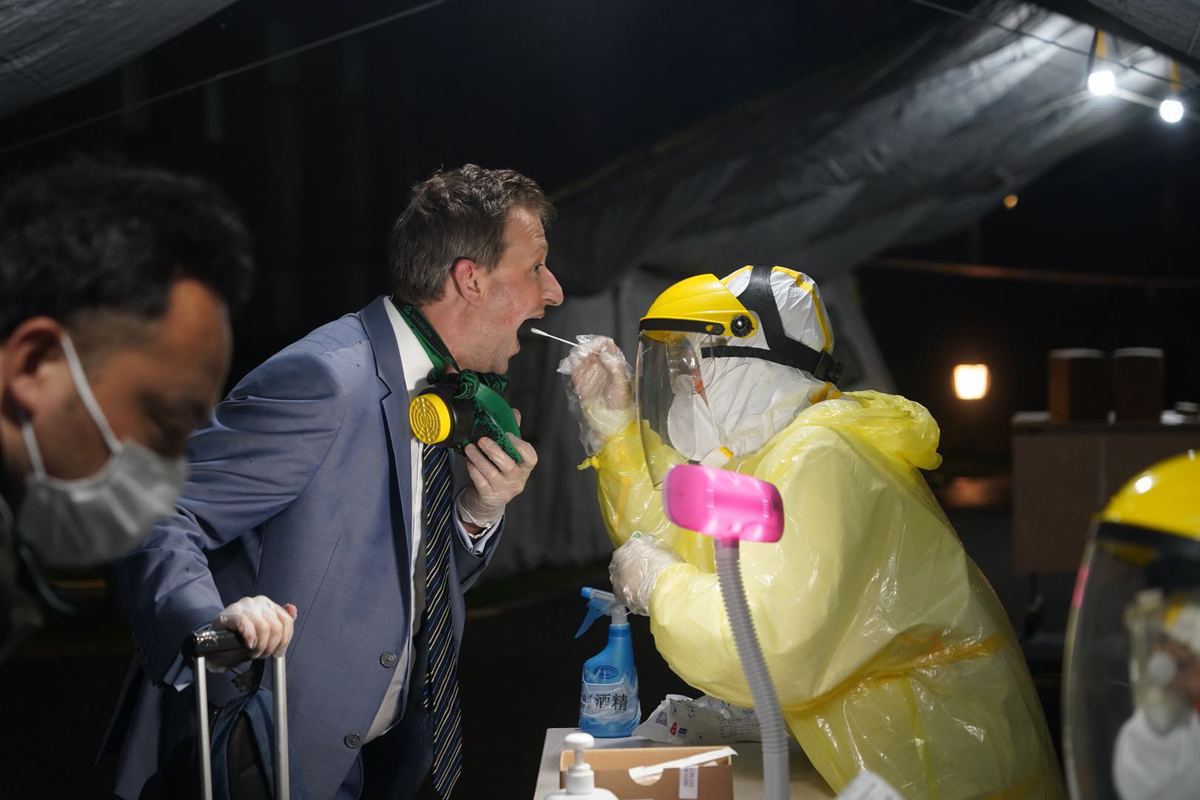 A foreigner receives a nucleic acid test at a temporary inspection point in Shanghai on March 21, 2020. (Photo by Gao Erqiang/chinadaily.com.cn)

Guangdong province has reiterated that it treats domestic and foreign individuals equally in its fight against COVID-19.

In an open letter to local and foreign residents living in the province titled "Joint efforts to fight against COVID-19", the provincial government said Guangdong takes the same prevention and control measures for everyone in the province, regardless of nationality, race or gender.

Zhang Xin, deputy governor of Guangdong, said the provincial government had also introduced special measures covering nine major industries and sectors in order to fight the pandemic and restore production and business in the province, which is a major national manufacturing base and commercial area.

"The measures that are equal for all people in Guangdong involve health and medical treatment, education, catering, transportation, tourism and scenic spots, hotels and restaurants, supermarkets and shopping centers, residential houses and housing estates, and leasing homes," Zhang said at a conference attended by foreign diplomatic representatives last month.

Guangdong, one of China's frontline regions in the prevention and control of imported cases, requires all inbound passengers from overseas to undergo a 14-day quarantine period and nucleic acid testing for novel coronavirus.

The measures apply to both Chinese nationals and foreigners and do not target a specific group.

Meanwhile, many Guangdong cities have established monitoring and inspection centers for COVID-19 where foreigners and those who have returned from abroad can report their health conditions and undergo a nucleic acid test.

Zhang said the provincial government had asked all departments, organizations, groups and individuals in Guangdong to strictly abide by relevant laws, regulations and rules in the fight against COVID-19 and treat locals and foreigners equally.

"Those who violate relevant laws, regulations and rules in the fight against COVID-19 will be punished according to the law," he added.

The provincial government has asked relevant departments, organizations and groups to open special hotlines to allow locals and foreigners to make complaints and reports 24 hours a day.

"Relevant departments have expanded contact and exchanges with foreign consulate generals in Guangdong, foreign chambers of commerce and relevant organizations and groups to explain and introduce Guangdong's policies, regulations and rules in the fight against COVID-19 after the outbreak of the pandemic, and have won foreign residents' support, respect and understanding," Zhang said.

Alima Danfakha Gakou, the Mali consul in Guangdong's capital Guangzhou, thanked the provincial government for helping foreigners in the fight against COVID-19.

Many other consuls attending the conference also expressed their appreciation for Guangdong's efforts in battling the virus in recent months.

The special measures Guangdong has introduced to control the virus and restore production and commercial activities in the province are the same for both locals and foreigners, they said.

As of Saturday, Guangdong, with a population of more than 115 million, had reported 1,588 COVID-19 cases, of which 193 were imported. Most of the imported cases were returning Chinese nationals.