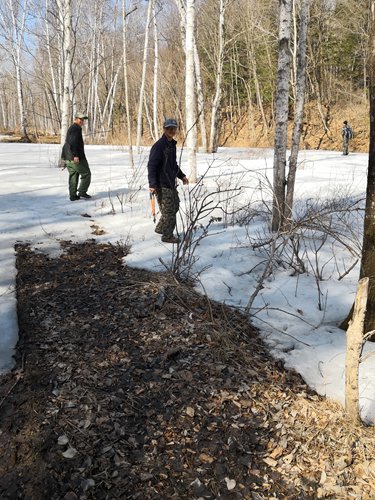 Zhan Youfa, a forest ranger at the Beidayang forest farm in Northeast China's Jilin Province with 20 years of experience, was having dinner at home after a long day of patrol when he received an emergency call to help put out a fire at 5:30 pm on April 12. He threw down his chopsticks and immediately rushed out.Fire prevention is one of the most important responsibilities of a forest ranger. The serious fire that broke out on March 30 in Liangshan Yi Autonomous Prefecture, Sichuan Province and led to the deaths of 30 people drew public attention to the importance of their work.  Zhang Jianlong, head of the National Forestry and Grassland Administration (NFGA), said that China will create 300,000 new posts for forest and park rangers, China National Radio reported. China and India received praise via the Twitter account of the US National Aeronautics and Space Administration (NASA) for their efforts in tree planting and agriculture, which have contributed to the Earth becoming greener than it was 20 years ago on February 12. China's afforestation area has expanded from 330 million mu (around 22 million hectares) in the 1980s to 1.18 billion mu (around 78.7 million hectares) currently, ranking first in the world. Against a backdrop of a continuous global decrease in forest resources, the area and stock volume of China's forests have increased steadily, making it the country with the greatest increase of forest resources in the past 20 years, Zhang told the People's Tribune.China stopped all commercial logging of natural forests nationwide in 2017, according to NFGA. When this comprehensive logging ban was implemented, many lumberjacks changed their jobs to become forest rangers.Qi Junyue, a 43-year-old forest ranger at the Beidayang forest farm who had worked as a lumberjack until three years ago, told the Global Times that he felt sorry when he realized some of the trees he had previously felled belonged to rare species. Rangers are on the front line of wildlife and plant protection efforts, with responsibilities that include the prevention of poaching, illegal logging, mining, illegal grazing and forest fires, among other things. Qi takes pride in his patrol work, which can be dangerous and tough, as he believes it plays a part in preserving natural resources for coming generations. To guarantee their safety, patrols generally consist of two people. "Never confiscate guns by force if you encounter poachers alone," Qi said, recalling the advice given by a veteran ranger.Zhan Youfa, 54, has witnessed considerable changes in this role since the introduction of the logging ban. "Before, I helped prevent fires and illegal logging in order to ensure the economic interests of our forest farm, but now I guard the forest to protect the ecological environment, whose value is inestimable," Zhan said.

Changing mindsPreventing villagers from cutting firewood is more difficult than stopping illegal logging, Zhan explained. The villagers prefer to burn wood with a high energy content such as Mongolian oak, which burns well, but felling of this protected species is forbidden under China's Forestry Law. For villagers who have lived this way for generations, it is difficult to understand how cutting some firewood for cooking is against the law. "Education is more important and effective than punishment in dealing with such circumstances," Zhan told the Global Times. Forest rangers found the village head and organized forest conservation workshops that were made available to all villagers, in which they explained the current condition of forestry resources in China and showed them pictures of protected trees which they cannot cut down. "With time, patience, and education, the villagers gradually changed their thinking and conscientiously used firewood from other species for heating, and came to understand the importance of protecting the forest," Zhan said.China's ecological situation has gradually improved, and today it has a national forest coverage rate of 21.66 percent, which is still far lower than the global average of 31 percent. The forest area per capita in China is only one quarter of the global per capita level. China's natural grassland area is the largest in the world, but has experienced serious degradation: Its area per capita is only half of the global average, according to the Xinhua News Agency."China is still a country with scarce forests and grassland, and its ecology is still very fragile. We need to make a concerted effort to further improve our afforestation," Zhang Jianlong, the head of NFGA, said during the recent Two Sessions, according to Chinanews.Just 20 forest rangers on the Beidayang forest farm are responsible for the conservation of 9,191 hectares of forest land. Zhan and Qi hope that more young people will work as forest rangers, as they will be able to use their extensive knowledge and advanced technology to protect the forest.