The nation's forestry authority issued a notice on Monday pledging to crack down on the illegal hunting, transportation and trading of wildlife and tighten supervision of captive-bred animal farms to safeguard public health. 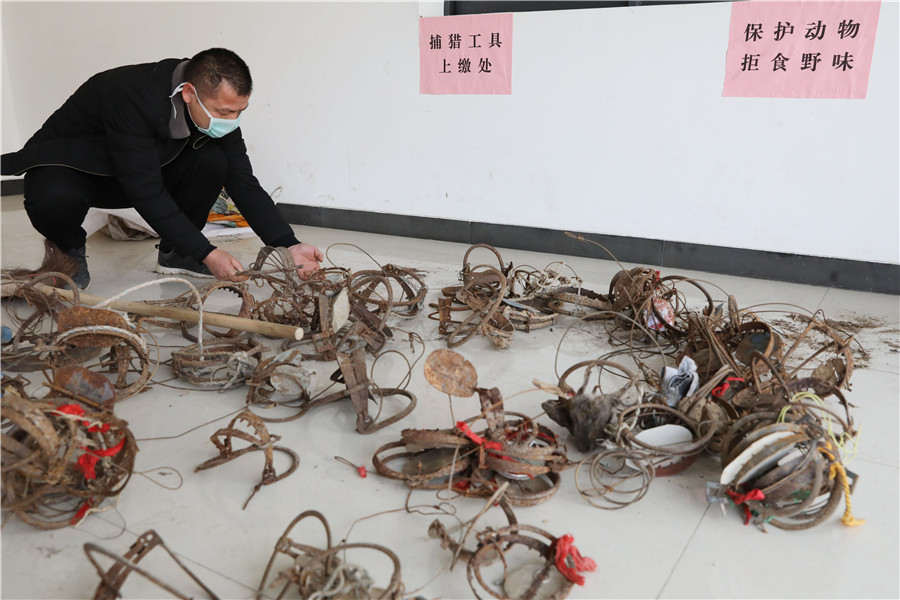 A village official counts traps turned over by villagers in Lin'an district of Hangzhou, Zhejiang province, last month. More than 100 snares and traps were turned over after villagers were urged to stay away from game meat and protect wildlife. (Photo: China Daily)

Forestry departments at all levels should concentrate their efforts on strengthening wildlife protection work, especially in core protected areas, said the notice released by the National Forestry and Grassland Administration.

As many wild birds migrate in winter, the administration urged local forestry departments to conduct strict supervision of illegal catches along migration paths, and clear nets as well as traps to ensure the safety of birds and other wild animals.

It said the forestry department will work with other sectors to shut down illegal wildlife markets across the country and clean up online information on the wildlife trade.

"We will build a reward mechanism to collect public reports on those illegal activities related to wildlife trade and consumption," it said.

Moreover, it urged forestry departments at all levels to conduct inspections of farms that specialize in wild animal captive breeding and impose severe punishments on those operating without certificates.

"Certified farms but that are breeding territorial wild animals for the purpose of consumption will have their certificates recalled," said the notice.

The National People's Congress, China's top legislature, released a decision on Feb 24 banning the hunting, trading and transportation of wild terrestrial animals for purposes of consumption.

As Tuesday marks the seventh World Wildlife Day, the administration said that many endangered species have seen stable population growth under its protection.

China has more than 11,800 natural reserves, accounting for 18 percent of its land area. Those reserves cover 35 million hectares of forests and 20 million wetlands, which harbor 90 percent of China's territorial ecosystem and 85 percent of its wildlife.

Several species that had been on the edge of extinction have witnessed astonishing population growth in past decades thanks to the strong protection measures.

For example, the crested ibis, known as the "Oriental Gem", was once widespread in eastern China, Japan, Russia and South Korea, but was later declared extinct in those areas. Over the past three decades, however, its population in China has grown from seven to 2,000 under protection and artificial breeding.

Moreover, the number of Tibetan antelope increased in the past three decades from 75,000 to more than 300,000. The species' protection level has been changed from "endangered" to "near-threatened", according to the administration.