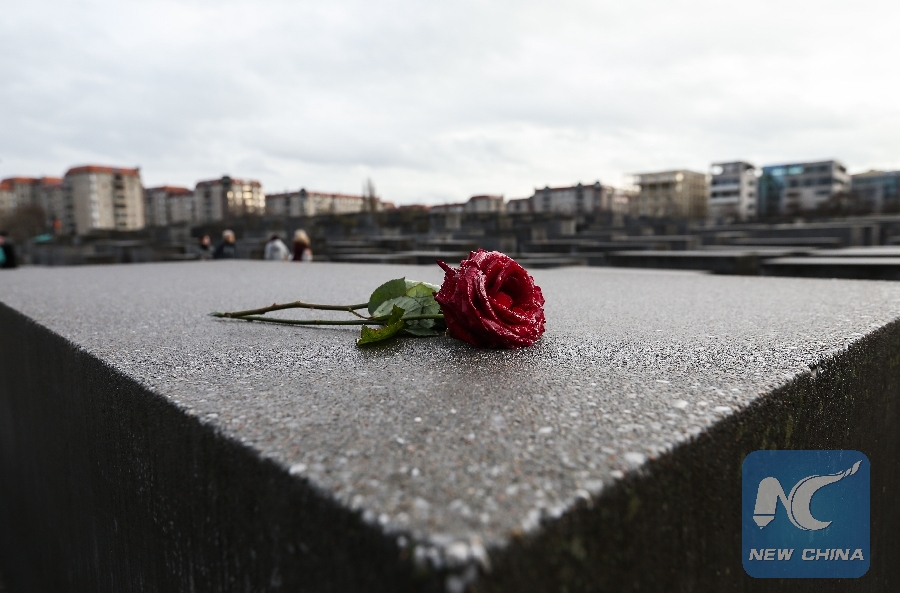 A rose is seen at the Memorial to the Murdered Jews of Europe in Berlin, capital of Germany, on Jan. 27, 2019. The memorial, located in the center of Berlin, was built to remember the up to 6 million Jews killed in Nazi Germany during World War II. (Photo: Xinhua)

SAN FRANCISCO (Xinhua) -- The daughter of a former Chinese diplomat who risked his life and career to help thousands of Jews escape from Nazi-occupied Europe recounted her father's story during an event to mark International Holocaust Remembrance Day held in the western U.S. state of California on Sunday.

Fengshan Ho, known as the "Oskar Schindler of China," served as the Chinese Consul General in Vienna from 1938 to 1940. When the Nazis took over Austria in March 1938, anti-Semitism and the persecution of Jews erupted in full force.

"My father was one of the first diplomats who helped Jews escape the Nazi-occupied Europe," Manli Ho told the audience of hundreds of people from the Jewish community who attended the event hosted by Congregation Rodef Sholom in San Rafael, about 29 km north of San Francisco.

"What he did was to issue one particular visa to one place in China -- the port of Shanghai," she said.

The Nazi authorities incarcerated Jews in concentration camps unless they produced proof of emigration. At that time, the Japanese-occupied Shanghai did not require documents for entry. With Fengshan Ho's visa, Jewish refugees were allowed to leave Austria.

Consulates were flooded with applications from Jews desperate to escape the Nazi Holocaust, but many countries were unwilling to accept more refugees, Manli Ho explained.

Shanghai was the first city in the world which opened doors to Jews. According to the Shanghai Jewish Center, from 1938 on, some 20,000 Jewish refugees from Germany and Austria escaped to Shanghai. By the end of the war, the Chinese coastal city was home to approximately 24,000 Jews.

During her presentation, Manli Ho showed the audience historical photos, including those of some refugees' passports with her father's visas, as well as family photos of some refugees after they had escaped Europe.

It was not known how many visas Fengshan Ho had issued for Jewish refugees, but based on the serial number of the visas, it was estimated to be in the thousands, his daughter said.

"He is a role model for us," said Elana Rosen-Brown, Rabbi-Cantor of Congregation Rodef Sholom. "We are all motivated by his righteous deeds."

International Holocaust Remembrance Day is an global memorial day on Jan. 27 designated by the United Nations in 2005 to commemorate the genocide that occurred during World War II.