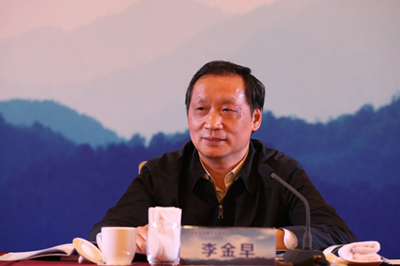 BEIJING, Jan. 25 (Xinhua) -- Former Vice Minister of Culture and Tourism Li Jinzao has been expelled from the Communist Party of China (CPC) and dismissed from public office over serious violations of Party discipline and laws, the top anti-graft body announced Monday.

Li was also removed from his position as a delegate to the 19th CPC National Congress.

The CPC Central Commission for Discipline Inspection and the National Supervisory Commission said in a statement that they had conducted an investigation into Li's case.

Li was accused of being dishonest and disloyal to the Party and resisting the authorities' investigation.

The investigation found that Li, in violation of the CPC's code of conduct, had been frequently attending banquets that risked compromising the impartiality of his work and accepting money and gifts, according to the statement.

He had provided help for others during official selection and appointment procedures, accepting money and gifts in return.

He also took advantage of his positions to seek benefits for his relatives' businesses, or help others in business operation and project contracting and accept huge amounts of money and gifts in exchange.

Also, the investigation found that Li had led a corrupt life and colluded with his family in profit-seeking activities.

Li has severely violated the Party discipline and is suspected of taking bribes, the statement said, adding that he showed no restraint even after the 18th CPC National Congress.

The statement said his illicit gains shall be confiscated, and the case will be transferred to the procuratorate for further investigation and prosecution.