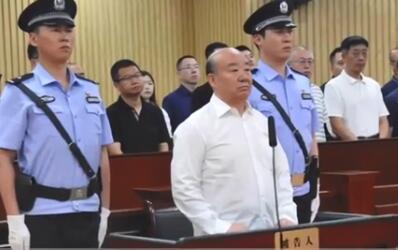 Wang Erzhi, former vice-chairman of the Jilin Provincial Committee of the Chinese People's Political Consultative Conference, was sentenced to 14 years in prison and fined 4 million yuan ($569,000) for taking bribes at a local court in Heilongjiang province on Friday.

All of Wang's illegal gains were confiscated. Wang said in court he would not appeal, according to the Harbin Intermediate People's Court.

From 2001 to 2018, Wang made use of his positions, including deputy secretary-general of the Jilin provincial government and secretary-general of the Jilin Provincial Committee of the CPPCC, to offer preferential treatment to others in contracting, construction and land leasing. In return he received bribes worth of 50.7 million yuan, the verdict read.

The court said Wang committed the crime of bribery, and the amount of bribes was especially huge. But he confessed his crimes during investigation, voluntarily shared some facts unknown to the investigators and returned all the bribes. As a result, he could receive a lighter punishment, according to the court.

Wang, 64 and a native of Jilin, took the position of vice-chairman of the Jilin Provincial Committee of the CPPCC — the provincial advisory body — in 2012.

Wang was placed under investigation in August 2018 by the Central Commission for Discipline Inspection and the National Supervisory Commission for serious violations of discipline and law.

He was expelled from the Communist Party of China and removed from his public office in January 2019. The first hearing of Wang's case was in May and the sentence was rendered on Friday.