CHINA Former patient hopes to be picture of good health

Former patient hopes to be picture of good health 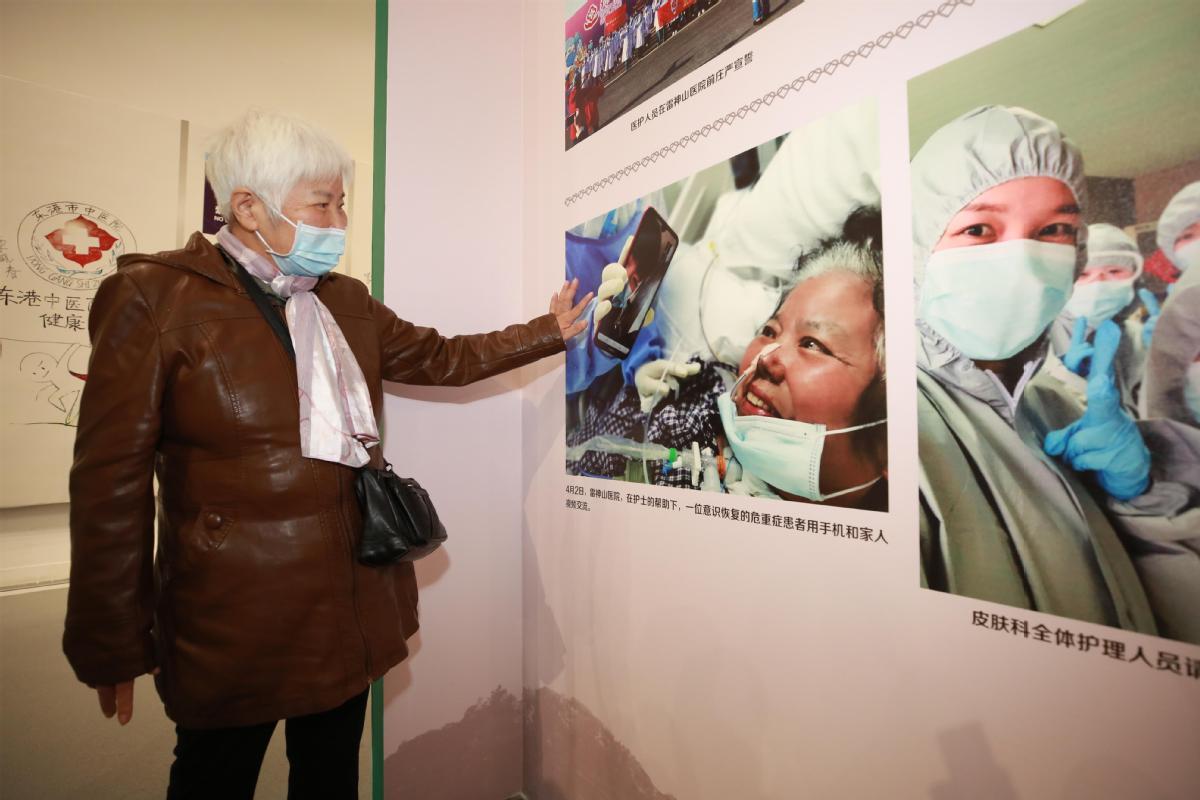 At an exhibition in Wuhan, Hubei province, in September, Tao Zhenlan looks at a photo of herself making a video call with her family during her treatment last year. (Photo: China Daily)

Wuhan resident Tao Zhenlan has a good reason to remember 2020: It was the year she was saved from death.

At an exhibition about the fight against COVID-19, which was held in a museum at Wuhan University in September, Tao recognized a photo of herself at once.

In the photo, the 66-year-old was lying in bed in a makeshift hospital.

Surrounded by all sorts of medical devices, the former math teacher at a middle school in Wuhan, Hubei province, was having a video chat with a family member using a smartphone held by a medical worker. Her eyes were full of tears.

"At the time, I had just been brought back to life at Leishenshan Hospital. I was chatting with my granddaughter, whom I hadn't seen since I was hospitalized," Tao recalled. "I missed her so much and couldn't help crying."

She remembers clearly that on Feb 14, she started coughing and her feces turned black. She was quickly diagnosed with COVID-19 and hospitalized.

"Before I left home for the hospital, I told my husband that we might never meet again. I didn't expect to survive after contracting all these things," she said.

In hospital, her condition continued to deteriorate and respiratory failure occurred.

On Feb 20, she was transferred to the intensive care unit of Leishenshan Hospital, which was established in no more than three weeks in Wuhan, capital of Hubei, one of the places hardest hit by COVID-19 on the Chinese mainland.

"I shared a ward with a woman in her 70s, but because of the sickness, we barely had the energy to communicate with each other," she recalled.

"My condition was so bad. I couldn't breathe and felt that I could die any time. But the doctors and nurses kept encouraging me. They gave me the thumbs-ups and said I'd done a good job (in fighting the disease)."

Peng Zhiyong, director of the ICU at Zhongnan Hospital at Wuhan University, who was serving as director of the Leishenshan ICU, said Tao's condiction was critical as she had lung fibrosis and multiple organ failure when she arrived at Leishenshan.

The medical workers intubated Tao to help her breathe, but her condition didn't improve. In late February, they decided to use extracorporeal membrane oxygenation, employing equipment that functions as lungs and hearts for patients with multiple organ failure, to save Tao's life, he said.

After more than 10 days of treatment, Tao was eventually out of danger. Her words to her husband before being hospitalized didn't come true. Her lung function improved and she started to recover. She was discharged from the hospital in late May.

Now she visits Zhongnan Hospital at Wuhan University once a month to have physical examinations to gauge her health condition. She chose the hospital for regular checkups because she could see the doctors and nurses who had saved her at Leishenshan, including Peng.

It was also at Peng's invitation that she visited the exhibition in September.

Having escaped from the grip of death, Tao said her only wish for this year is to stay healthy.

"I've tried square dancing, but still cannot do it well. So I'm trying to jog twice a day and meanwhile taking some traditional Chinese medicine, which is good for the health, to further improve my condition," she said.

"Hopefully, I will regain the good health I had before I became ill."