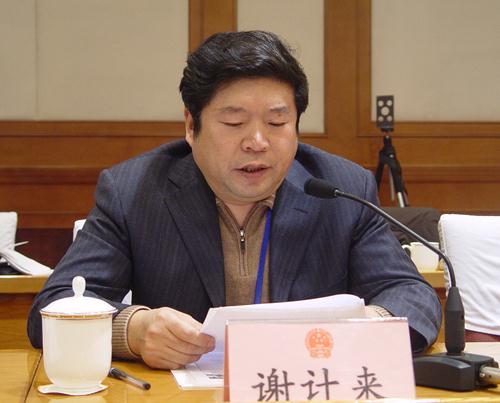 BEIJING, July 29 (Xinhua) -- A former senior legislator of north China's Hebei Province has been expelled from the Communist Party of China (CPC) over severe violations of Party discipline and the law, the country's top anti-graft body announced Friday.

An investigation found that Xie Jilai, former vice chairman of Hebei's provincial people's congress standing committee, has lost his ideals and convictions. He made his power of selecting and appointing officials an instrument to seek his own interests by trading this power for money, the CPC Central Commission for Discipline Inspection and the National Supervisory Commission said in a statement.

His conduct seriously undermined the public trust in the Party's organization work and local political environment, said the statement.

Also, Xie had been uncooperative in his case investigation.

The statement also accused Xie of defying the Party's eight-point decision on improving Party and government conduct, accepting banquet invitations and visiting private clubs, and accepting a huge amount of money and gifts in violation of relevant rules.

It added that Xie had a severely problematic lifestyle and completely disregarded the red line of discipline and the law.

The investigation also found that he had taken advantage of his posts to seek benefits for others in personnel promotions, appointments, and real estate development projects, taking vast amounts of money and gifts in return.

In line with Party regulations and relevant laws, a decision has been made to expel him from the Party, revoke the benefits he enjoyed, confiscate his illicit gains, and hand over his case to procurators for prosecution, said the statement.