The former leader of Taiwan island, Ma Ying-jeou, said his Saturday criticism toward the current Democratic Progressive Party (DPP)  administration that the latter is pushing the island toward the verge of war was spot on, after its current leader, Tsai Ying-wen, fired criticism at him for his earlier remarks. 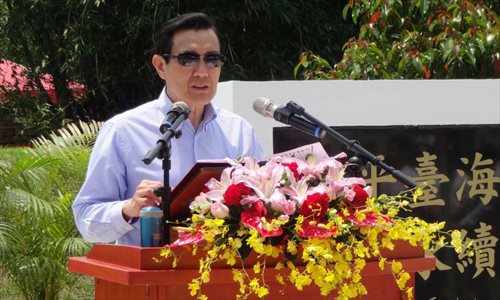 Ma, of the Kuomintang (KMT), gave the speech at a forum on Saturday morning, during which he said he will strive to prevent war between the Chinese mainland and Taiwan from now until the day he dies, amid an escalation in cross-Straits tensions in recent days.

The former regional leader also pointed out that Taiwan is leading itself into a perilous situation due to the Tsai Ing-wen's administration's pursuit of a policy that slants heavily toward the US and antagonizes the mainland.

Ma's remark was attacked by the Tsai's administration later, who said that his remark has deviated from reality and it is confusing how Ma used war to threaten people in Taiwan.

Ma responded to the criticism on Saturday afternoon, saying that the fiery criticism he received means that his remarks were spot on, and that he welcomes such criticism, as it is the only way to bring the neglected topic back into the sunshine.

Ma said that reunification is a process that should not be realized in the blink of an eye. China has a history of over 4,000 years, and the country remained unified for 70 percent of the time. There have always been wars from unification to separation, but we need to solve the dispute in a peaceful matter, said Ma, pointing out that the 1992 consensus is a good tool with which to realize such a goal, said Ma, according to media reports.

According to Taiwan media reports, Ma said earlier this month at a speech that if the Chinese mainland decides to reunify the island by force, "the first battle is the last battle," and the US military will not come to the island's rescue, and that there won't be time for the US to come either.