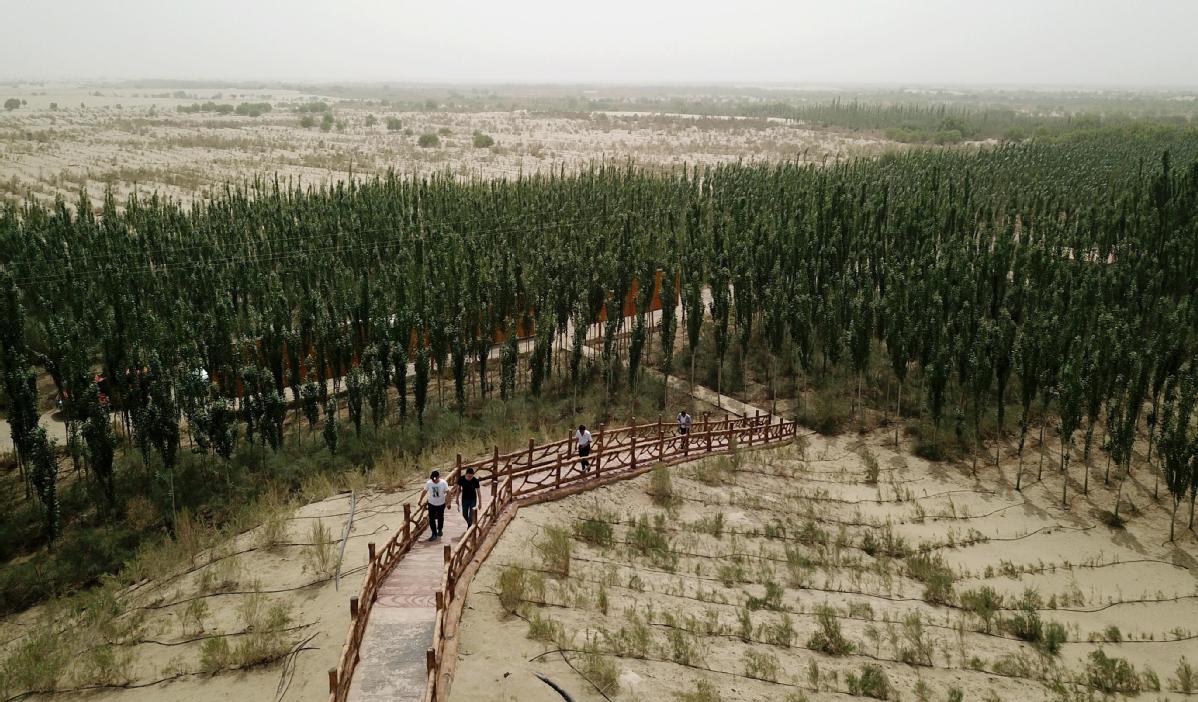 People walk across a bridge in the man-made woods in Makit county, Kashgar, Xinjiang Uygur autonomous region. In 2012, the local government launched a project to convert about 66,000 hectares of desert on the county outskirts into woods. (Photo: CHINA DAILY)

An online forum where researchers and experts gathered to discuss how to combat desertification in countries involved in the Belt and Road Initiative was held on June 17, which is also the United Nation's Desertification and Drought Day.

More than 300 representatives from universities, institutes, enterprises and international organizations attended the forum which was held by the Xinjiang Institute of Ecology and Geography of the Chinese Academy of Sciences, the Alliance of International Science Organizations (ANSO) and the United Nations Convention to Combat Desertification.

The event's main venue was set in Korla, Xinjiang Uygur autonomous region. Bai Chunli, former president of CAS and the president of ANSO, came to deliver a keynote speech for the event. He said CAS's Xinjiang Institute of Ecology and Geography has been taking responsibility to prevent desertification across the region.

Through bilateral and multilateral collaborations, it has organized investigations into areas that have vulnerable ecosystems in Central Asia, East Asia, West Asia and Africa.

He held that collaborative studies on anti-desertification will help spread scientific ideas of desertification prevention among countries involved in the Belt and Road Initiative. And that will also help strengthen China's science and technology diplomacy.

Abakar Mahamat Zougoulou, the scientific and technical director of the Pan-African Agency of the Great Green Wall (PAGGW) said that the major problems and urgent actions faced by the Xinjiang region and more globally the Taklimakan Desert are a classic example similar to the arid and hyper-arid regions of the Sahel and Sahara. And the similarities require PAGGW to collaborate with institutions in Xinjiang to carry out joint anti-desertification efforts.