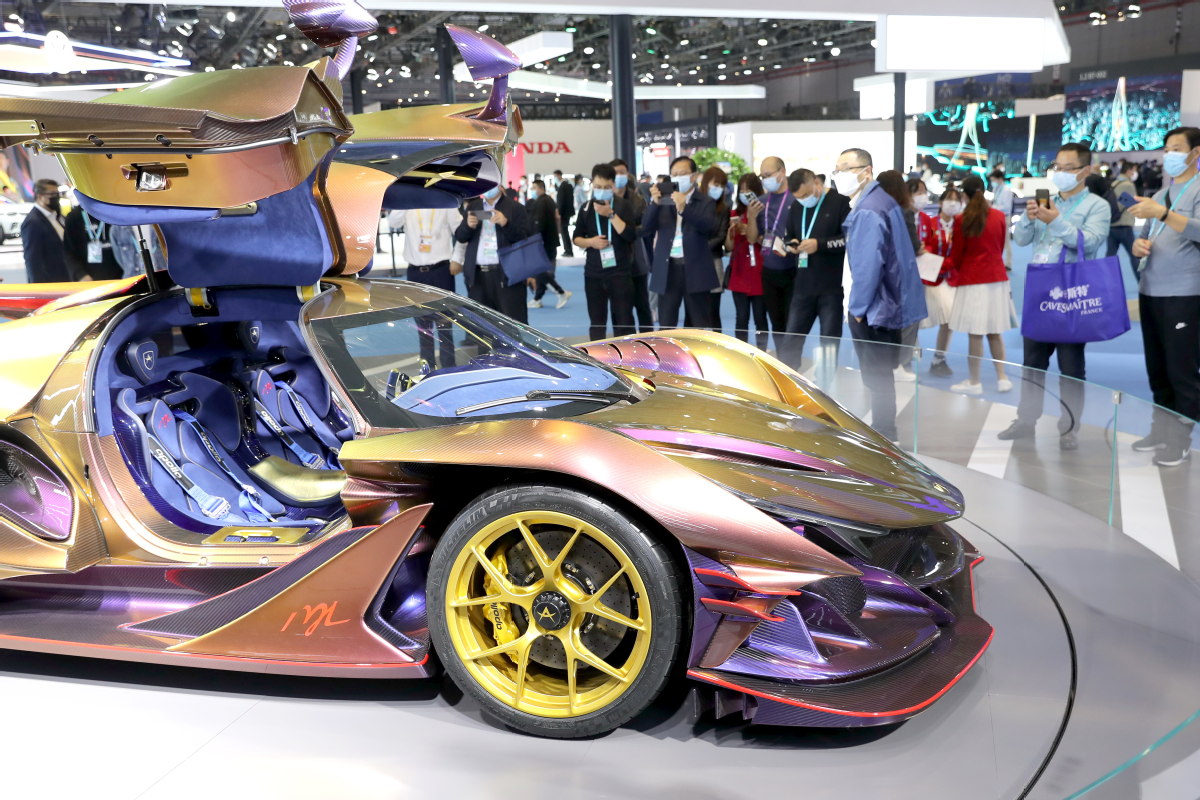 Visitors check out an ApollolE car during the third China International Import Expo on Nov 6 in Shanghai. ( Photo: China Daily)

China's new dual circulation development pattern, an efficient public health system that is responsive to the COVID-19 epidemic, and rising disposable incomes, are all generating growth opportunities for domestic companies and making China a more attractive market for foreign companies, experts said at a forum.

"The domestic circulation in the dual circulation will play an increasing and vital role in driving China's economic growth in the following decades, as innovation will be a major focus in the development pattern to boost 'new infrastructure' and digitalization, and sprout green shoots in traditional industries," said Huang Qifan, vice-chairman of the China Center for International Economic Exchanges.

Huang was speaking at a forum on how enterprises can return quickly to a steady growth track amid global uncertainties and the COVID-19 pandemic. The event was organized by the Center for Leadership and Executive Coaching in Shanghai in late October.

As a solution provider, the center helps enterprises, especially small and medium-sized ones, to make development plans that suit them well.

"Innovation will be more focused on how to help the traditional industries to embrace digitalization and deepen the supply-side reform, so as to enhance their ability to exploit their market potential. In addition, the private sector will gain more momentum and support in the dual circulation development pattern, which will brighten business-owners' sentiment and improve the overall business environment in the nation," Huang said.

Huang also highlighted that domestic consumption demand is a major focus in the dual circulation development pattern and a key factor in the country's opening-up moves.

"There still lies big potential in the increasing mid-income group in the nation. Currently, there are over 400 million mid-income earners who are spending 40 percent to 50 percent of their total income to repay housing loans and related expenses. Domestic consumption will be boosted greatly if the group spends less on housing. This will generate more demand in nation, and lure more companies from around the globe to tap into the booming demand, which will in return promote the smooth functioning of the dual circulation pattern," Huang said.

Introduced in May, the dual circulation development pattern takes the domestic market as the mainstay while letting the domestic and foreign markets boost each other.

FDI in China grew 5.2 percent year-on-year to 718.81 billion yuan ($107.2 billion) in the first three quarters of this year, according to the Ministry of Commerce.

"The dual circulation development pattern is a right strategy of China to cushion against the economic impact of the COVID-19 pandemic as well as the global uncertainties. It also deepens the opening-up efforts of the nation, which will surely help COVID-19-affected enterprises to recover sooner than later," Huang said.

Yao Yang, dean of the National School of Development, Peking University, told the forum: "China has proved to the world that it has done a nice job in fighting the COVID-19 epidemic, and such efforts have paid off, shown by the consecutive surge in global trade in the past several months."

China has managed to keep foreign trade stable this year despite disruptions by the COVID-19 pandemic. In the first 10 months, the country's foreign trade in goods went up by 1.1 percent year-on-year, accelerating from an increase of 0.7 percent in the first three quarters, Customs data showed.

"We haven't seen any 'quitting from China market' trend among foreign companies so far, and the reason is obvious-China has become a key market globally that they can't afford to lose," Yao said.

According to the organizer of the third China International Import Expo in Shanghai, which ended on Tuesday, the annual event represents a significant opening-up move of the Chinese government to boost trade liberalization and economic globalization.

"We are extremely optimistic about the Chinese market's great demand and huge potential. That is why we decided to launch new products at the CIIE," said Tony Acciarito, president of Thermo Fisher Scientific China, which specializes in medical equipment and measuring instruments.

Agreed Pascal Bizard, senior vice-president of lifestyle and sports goods retailer Decathlon China. At the third CIIE, he said: "The dual circulation development pattern that President Xi Jinping noted in his speech is not only based on the needs of China's development but also the well-being of people across the world. The vast domestic demand of the Chinese market is inspiring us to continuously innovate."

Huang of the CCIEE said: "China's overall reaction to the COVID-19 pandemic and the trade disputes with the United States, and the dual circulation development pattern, have all shown the resilience of the Chinese economy and the swift response of the government against all odds. The nation will play a bigger part in boosting the overall prospects of the global community."