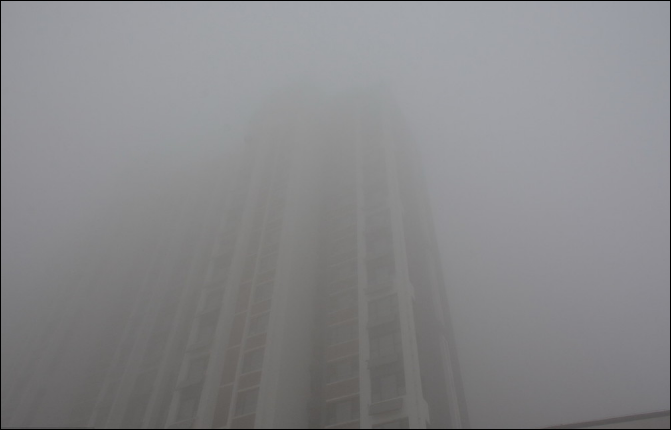 Four cities in Hebei province suffered air pollution on Friday due to recent unfavorable weather conditions, the third time the province has encountered smog since winter started this month.

The cities of Shijiazhuang, Tangshan, Xingtai and Dingzhou were experiencing slight air pollution at noon on Friday with the hourly average concentration of PM2.5 surpassing 100 micrograms per cubic meter, according to the real-time statistics of Hebei Provincial Bureau of Ecology and Environment.

Affected by increasing humidity and weakening winds, the conditions for dispersing air pollutants would gradually worsen and pollutants would accumulate, said a release by Dingzhou's ecology and environment bureau.

It issued a yellow air pollution alert on Wednesday, the third-highest level in a four-tier weather warning system, and launched an emergency response plan accordingly on Thursday.

Other cities in the province issued similar alerts.

"Winter is the season of high incidence for heavy air pollution because pollutant emissions increase after coal-fueled heating starts in mid November," said Wang Xiaoli, director of the weather emergency and warning center of the Hebei Provincial Bureau of Ecology and Environment.

Wang said the province is east of the Taihang mountains and south of the Yanshan mountains, which makes it easy for pollutants to gather and difficult to disperse.

He added that heavy pollution forms easily when there is less wind, high humidity and temperature inversions.

In the past few years, the province's actions to fight air pollution have gradually strengthened. As Beijing's neighbor and home to several of the country's most polluted cities, Hebei is at the forefront of China's fight against air pollution.

Experts predicted that this year's weather conditions in the Beijing-Tianjin-Hebei region are generally less favorable for air quality than previous years, which might lead to long-lasting haze in wider areas, Li Jianliang, deputy head of the provincial bureau, said at a recent news conference.

Li introduced measures the province will carry out this year for fighting air pollution, such as the reduction of heavy industries and coal use for winter heating, as well as controlling pollution at construction sites.

More than 2 million households have switched from coal to electricity or natural gas for winter heating this year and over 3,500 heavy-polluting companies have finished upgrading environment-friendly facilities, Li said.

The average concentration of PM2.5 was cut to 56 mg per cubic meter last year from 108 in 2013, said Ni Xiaoming, deputy head of the air environment department at the provincial bureau.

There is an exception this year for more than 16,000 companies or projects in the province that can operate normally when the province suffers air pollution.

"The move is to avoid a universal implementation of the pollutant-control measures like halting or restricting industrial processes," Ni said, adding that companies must meet a series of environmental protection standards to get an exemption.