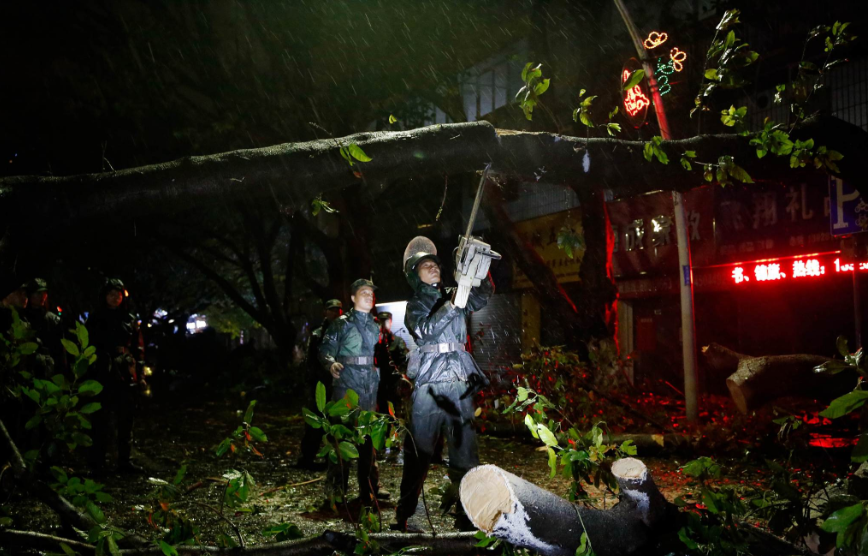 More than 500,000 people have been affected by typhoon Mangkhut in south China's Guangdong Province. (Photo: VCG )

As of Monday morning, 60,200 people were affected and over 264,000 people were relocated as typhoon Mangkhut bore down on south China's Guangxi Zhuang Autonomous Region.

According to a local grid company, some 130 villages from Yulin and Qinzhou City in Guangxi Zhuang Autonomous Region have suffered power cuts as of 6:00 am on Monday.

Mangkhut, which has been downgraded to a severe tropical storm, is moving northwest at a speed of 20 kilometers per hour.

It's expected to weaken further to tropical depression near the border of Guangxi Zhuang Autonomous Region and Yunnan Province by Monday evening.

Four have been killed and more than 500,000 people affected by typhoon Mangkhut in south China's Guangdong Province.

Three people were killed by fallen trees in Guangzhou City and one person was killed by a collapsing building in Dongguan City, according to local relief department.

Many rivers are flowing higher-than-normal due to record-high rainfall in south China's Guangdong Province and Guangxi Zhuang Autonomous Region.

Over 13,000 hectares of farmland have been affected.

All high-speed rail services between south China's Guangdong Province and Guangxi Zhuang Autonomous Region were suspended before Monday noon. Some routes will be reopened to the public by afternoon, reported China's national television broadcaster CCTV.

As typhoon Mangkhut continues to move inland of China, Shenzhen airport reopened on Monday morning at 5:00 am local time; however, many flights have already been delayed. According to CCTV, flight services at Guangzhou Baiyun International Airport and Zhuhai Jinwan Airport will also resume operations before long.

Over 250,000 people from the province have been relocated due to the typhoon, reported CCTV.

As typhoon Mangkhut moves further away from Hong Kong, China's Special Administrative Region, and south China's Guangdong Province, starting from 7:00 am local time on Monday, some trans-provincial high-speed rail trains along the Beijing-Guangzhou High-Speed Railway and the Xiamen-Shenzhen Railway have resumed operations.

Airports in Shenzhen have resumed operations for flights flying to and coming from Hong Kong starting from 8:00 am local time on Monday.

Typhoon Mangkhut made landfall in China's southern Guangdong Province with a maximum speed of 45 meters per second at 5:00 pm BJT on Sunday. Two people have been killed, and over 200 were injured as it slammed its way into China.