Chinese President Xi Jinping Sunday extended his greetings to children of all ethnic groups throughout the country ahead of International Children's Day.

Xi called on children across the country to study hard, firm up their ideals and train to be physically and mentally stronger so as to realize the Chinese Dream of National Rejuvenation.

Xi has always attached great importance to the healthy growth of children. He pays special attention to their eyesight, nutritious meals, physical exercise and practical creativity. 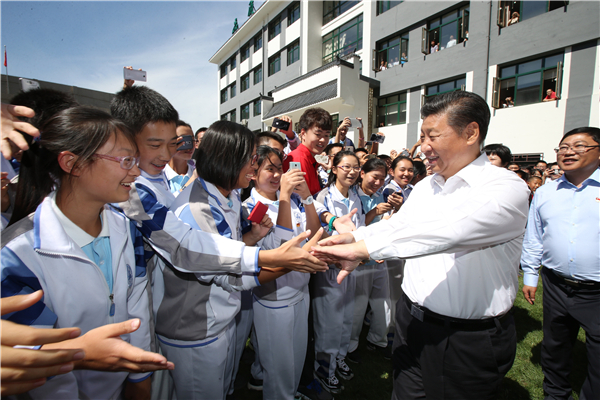 Xi has long been concerned about the high incidence of myopia among students and has pressed for effective measures to take care of Chinese children's eyesight so that "they will have a bright future."

In August 2018, after reading a media report on the problem, Xi noted myopia was affecting more children at a younger age and undermining their health.

This was a major problem for the future of the country and the Chinese nation, Xi said.

Authorities should pay close attention to this issue and not let it slip, Xi said.

Comprehensive and effective schemes to prevent and treat myopia among children should be made and governments at all levels should implement them, he said.

"All sectors of society should respond to this issue," Xi said. 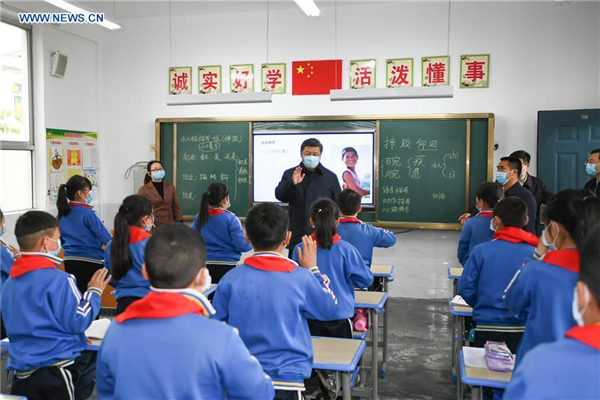 On April 21 this year, Xi visited a primary school in Laoxian Township, Pingli County during an inspection in Shaanxi Province.

After greeting a class of fifth-graders, Xi was pleased to notice fewer children wearing glasses.

“These children have a great spirit, and not many of them are wearing glasses. This is very important,” Xi said.

In addition, he is also concerned about the children's physical well-being.

In August 2016 at the National Health Conference, Xi emphasized that nutritious meals and packages should be introduced for students in poverty-stricken areas with a focused goal.

A year later, when Xi attended panel discussions with delegates from Guizhou Province at the 19th National Congress of the Communist Party of China (CPC) , he heard from a student brought by Huang Junqiong, a teacher at an elementary school in a small town in Guizhou.

One student wrote: “Grandpa Xi, thank you for your emphasis on education in our impoverished area, which allows us to receive a good education, have nutritious meals and live in a warm dormitory… I sincerely wish you happiness every day and hope everything goes well with your work.”

“I felt very warm when I heard this,” Xi said. “I hope every child studies hard and grows up healthily.” 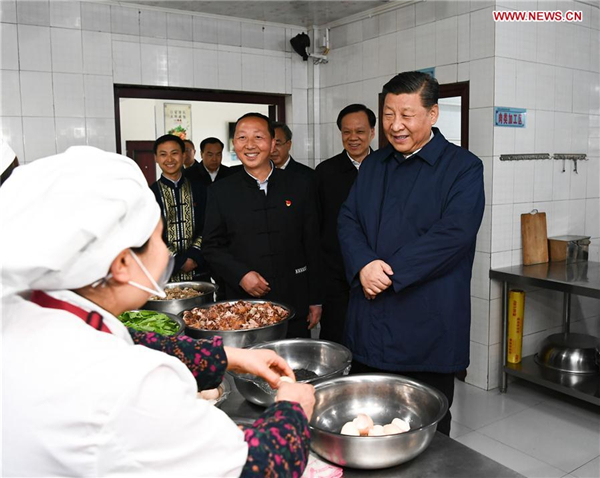 On April 15, 2019, Xi visited a primary school in Zhongyi Township of Shizhu Tujia Autonomous County, in the Southwest China municipality of Chongqing.

He walked into the school canteen for teachers and students, carefully inspected the dining room and kitchen and learned about food subsidies, safety and hygiene for imporverished students.

Xi urged schools and teachers to put safety first and ensure that students can study, live and eat well so that parents can rest assured.

Later at a student’s home, Xi shared his observation from the school visit. “There were two cooks in the school canteen, serving 157 students and 23 teachers, and they serve them with four dishes and a soup for lunch.

“When we initiated the poverty alleviation efforts, we tried to provide every student with a bottle of milk and an egg a day.

“The standard for each meal has risen to 6 yuan, which is more abundant than before.” 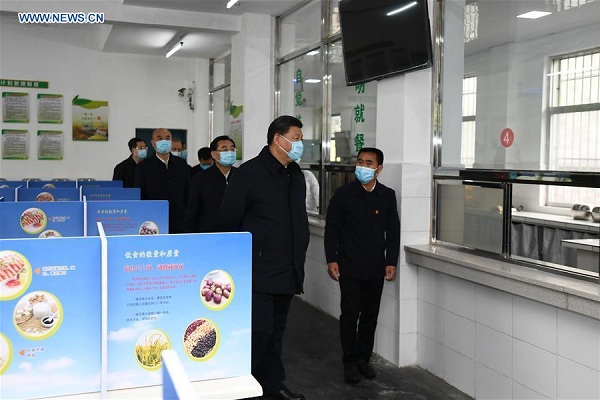 On April 21 this year, at a primary school in Laoxian, Pingli County, Shaanxi Province, Xi once again walked into the school canteen.

On that day, the children’s lunch menu was scrambled eggs with tomatoes and fried lean meat with cowpeas and rice.

Xi said he was pleased with the clean cooking and dining environment and the fresh meals.

He urged the school to clean and sterilize every piece of tableware and carefully prepare every meal. 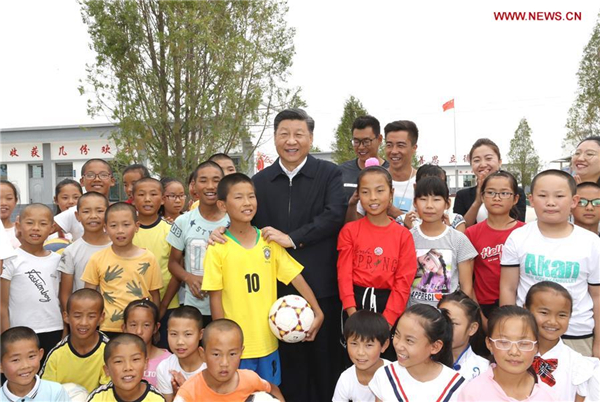 President Xi Jinping visits a new community, which is home to rural residents relocated out of ecological concerns, and inquires villagers about their livelihoods and progress on poverty relief, in Fumin New Village of Gulang County, Wuwei City, Northwest China's Gansu Province, Aug. 21, 2019.

“Young people nationwide should exercise and study well.” This is Xi’s earnest hope for young people in the country. He made it clear that it is necessary to establish the educational philosophy of “health comes first” and set up adequate sports courses.

On April 2, 2013, Xi attended a voluntary tree planting activity on the banks of Yongding River in Fengtai district, Beijing. When planting trees with the young pioneers, Xi talked with the children about their lives and study. Xi told the children that health is the capital needed for all success in life and reminded them to do more physical exercise. He emphasized that families, schools and society should create good conditions for the healthy growth of kids, just like they make good conditions for the growth of trees, so that children can become pillars of the country.

On September 9, 2016, Xi visited his alma mater, Beijing Bayi School. He talked with young players who were training on the drill ground. He said, “I played in this place more than 50 years ago. At that time, it was just a field of dirt.” 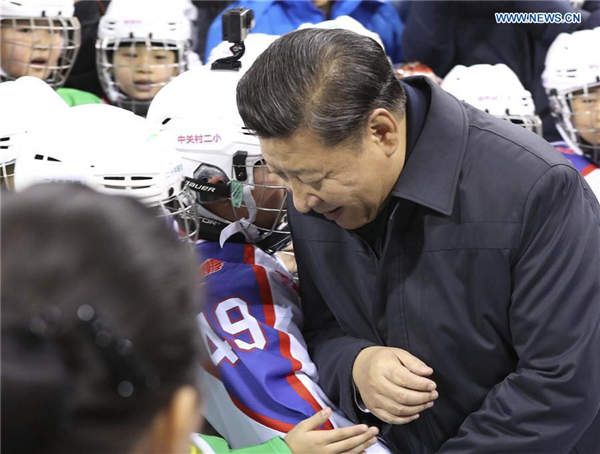 President Xi Jinping and ice hockey fans greet each other at Wukesong sports center in Beijing, capital of China, Feb. 24, 2017.

On February 24, 2017, President Xi observed youth ice hockey and figure skating training at the Wukesong Sports Center in Beijing. Children surrounded him. Xi leaned down and gave a little hockey player a shoulder nudge (greetings typically exchanged by players when they score). Xi also shared a story about himself with the team members and urged them to cherish current conditions and cultivate strong characters by participating in sports activities. 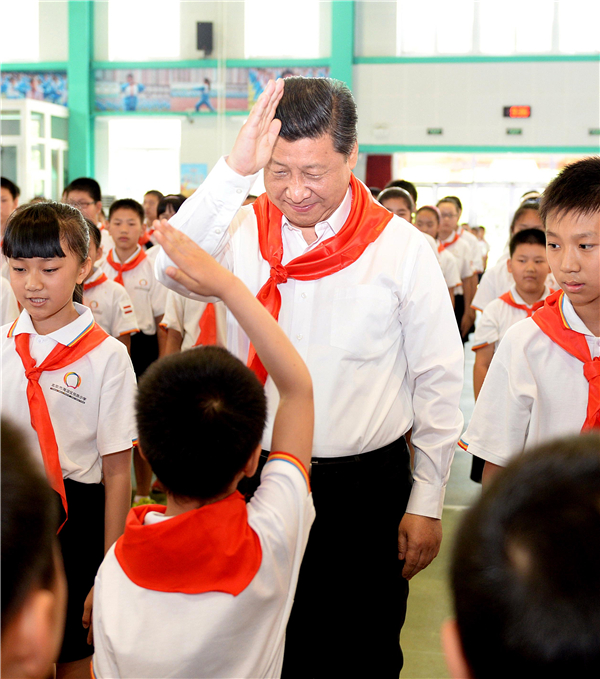 President Xi Jinping attends an initiation ceremony of Young Pioneers during his visit at Beijing Haidian National Primary School in Beijing, May 30, 2014.

On May 29, 2013, Xi attended an event at the Beijing Children’s Palace and expressed his congratulations to children across the country in the name of an “adult friend.”

Many young children were attracted to an activity on the third floor of the main building. Learning that the young children attending the “Creative Construction of a Beautiful Home” program were from disaster-stricken areas including Wenchuan, Yushu, Zhouqu and Lushan, Xi affirmed their determination and confidence in rebuilding a beautiful home and praised them for their innovative and creative consciousness that reflects advanced architectural concepts. Xi told the children that not only should they study knowledge from books and extracurricular activities, they should also be diligent in thinking and asking, so they can cultivate creative spirits.

“Children should learn to create from an early age”, Xi emphasized when speaking to some 3,000 members of the Chinese Young Pioneers (CYP) organization and teachers at the CYP's quinquennial congress in Beijing on June 1, 2015. 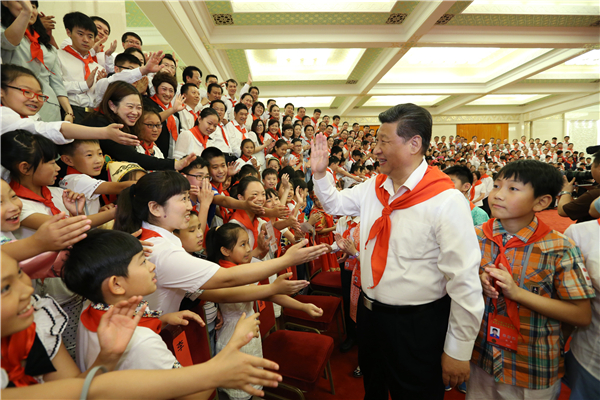 On September 9, 2016, Xi walked into a laboratory and communicated with teachers and students who were developing satellites as part of a science popularization program when visiting his alma mater, Beijing Bayi School.

Xi told students, “You are amazing. I merely could assemble a radio when I was at school. You are starting to cultivate scientific literacy, develop special interests and lay a solid foundation from middle school. And you will further learn professional knowledge about this field continuously on campus in the future. This is very good. Don’t forget to tell me when your satellite is launched!”

Before the satellite was launched, students from the research team wrote Xi a letter to report the news. On December 24, 2016, Xi wrote back to them, saying, “I’m very happy to know that the satellite designed and developed by you is about to be launched.”

“I hope you can maintain your desire for knowledge and interest in exploration, cultivate the spirit of science, study hard, practice diligently and inspire more teenagers to love, to learn and to use science, and strive to grow into pillars of the country and contribute to the realization of the Chinese Dream of the great rejuvenation the Chinese nation in the future,”Xi wrote in the letter.