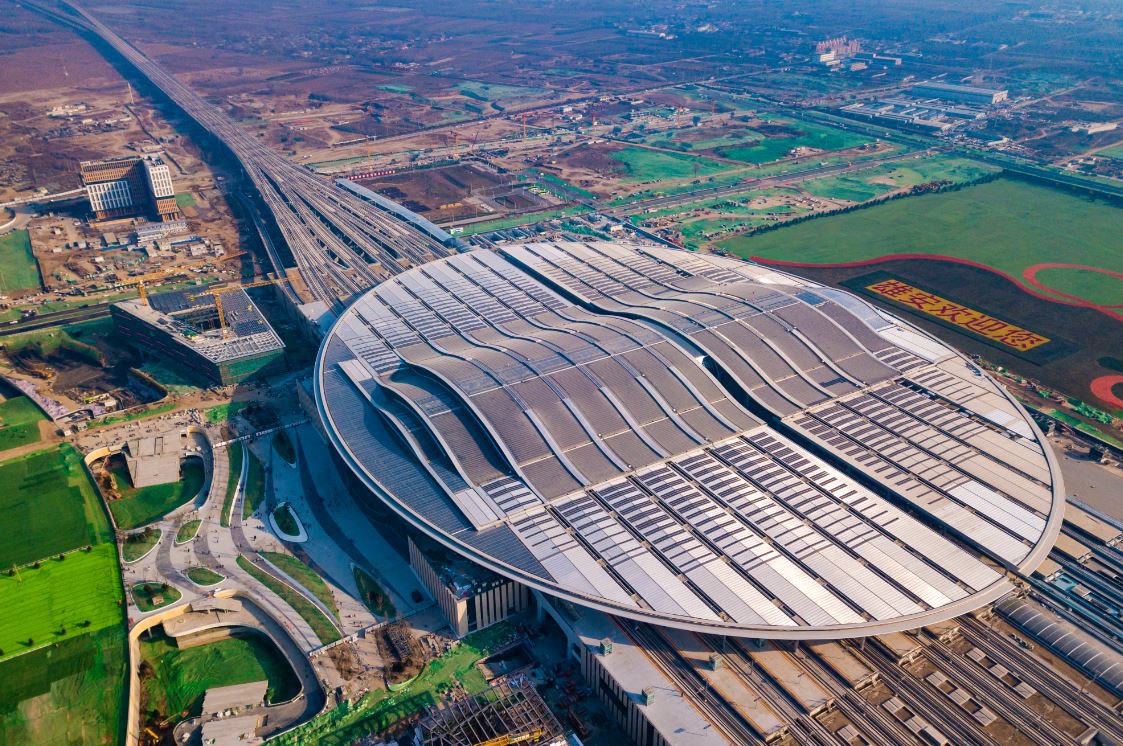 SHIJIAZHUANG, April 1 (Xinhua) -- Wang Shasha begins her day in the wee hours of the morning, as she climbs up a 50-meter-tall tower crane and starts operating the big machine to move building materials at a construction site in Xiong'an New Area, north China's Hebei Province.

For the 30-year-old crane operator, the most fulfilling moment of her challenging daily job is when she looks out from the crane cab and sees hundreds of high-rise buildings stand tall in the construction site forming a beautiful skyline against the backdrop of the rising sun.

Having worked in Xiong'an for well over a year, Wang said she always feels proud that she is helping to turn the blueprint of the new area, dubbed China's "city of future," into a tangible reality.

On April 1, 2017, China announced plans to establish Xiong'an New Area, located about 100 km southwest of Beijing, aiming to build the 1,770-sq-km area into a green city featuring innovation and a national model of high-quality development.

Construction of Xiong'an has been forging ahead at full throttle over the past four years, with over 160,000 people currently engaged in implementing more than 120 major projects such as infrastructure construction and ecological restoration.

In Xiong'an's Rongdong area, a major residential space where Wang works, over 85 percent of the nearly 1,000 buildings planned had been roofed by the end of March and will be ready for handover by June. The area is designed to accommodate about 170,000 people.

An intercity railway linking Xiong'an and Beijing started operation in December last year, slashing the commuting time between the two cities from one and a half hours to about 50 minutes. Meanwhile, the construction of three express lines linking Xiong'an, Beijing and the neighboring Tianjin Municipality is scheduled to open to traffic in May.

Infrastructure construction is also proceeding smoothly at Xiong'an's start-up area, which will be part of the Xiong'an city proper. Designed to take over Beijing's functions nonessential to its role as the national capital, the start-up area will serve as a new home for Beijing's colleges, hospitals, business headquarters, and financial and public institutions.

Since its inception, Xiong'an has been designed to become an intelligent city featuring high-tech and innovation as well as a magnet for global talented people.

As of February, more than 3,700 enterprises had registered in Xiong'an, of which more than 2,000 firms are in fields of scientific research, software development, information technology and technological services, according to official data.

Leading Chinese tech firms such as Tencent, Alibaba and Baidu are also on the list, as the tech giants are tapping into the area's great potential in developing frontier technologies including autonomous driving, cloud computing, blockchain and big data.

Eye Cool, a company specializing in artificial intelligence (AI), moved its headquarters from Beijing to Xiong'an in 2018, in view of the area's ideal environment for tech start-ups.

"Xiong'an has been billed as the 'city of innovation' since its establishment, and we couldn't wait to grab the opportunities it brought," said Wang Shuqi, the company's marketing director. "We're honored to have grown alongside Xiong'an's development."

Wang said her company's AI-based facial recognition technology has been used in industrial parks, railway stations, service centers and schools in Xiong'an for security purposes and prevention and control of COVID-19.

"With artificial intelligence to be widely adopted in every aspect of life in Xiong'an, I believe our company will have a brighter future here," she added.

According to Wu Hequan, an academician with the Chinese Academy of Engineering and an expert advisor to the coordinated development of the Beijing-Tianjin-Hebei region, the development of Xiong'an's high-tech and high-end industries will help optimize the region's industrial structure.

Such industries are expected to account for 70 to 80 percent of Xiong'an's economy, Wu noted.

"Green" is another buzzword in Xiong'an's grand development plan. It aspires to become a green city with harmonious human-environment interaction.

All-out efforts have also been made to restore the ecological environment of Baiyangdian Lake, an important wetland in the region. Over the past four years, local authorities have regulated more than 13,000 heavy-polluting enterprises, built new sewage treatment facilities and reduced fishery areas on the lake.

Thanks to the restoration efforts, the lake has expanded to about 290 sq km and the water quality of its central area has improved from Class V, the worst level in China's water quality grading system, to Class IV, according to Cheng Gang, a researcher with Xiong'an's ecology and environment bureau.

It is Baiyangdian's best water quality in the past decade, Cheng said.

According to the Xiong'an development plan, forests, greenery and water bodies will make up 70 percent of the city's total area.

"Environmental protection has always been a priority in the construction of Xiong'an," Cheng said, adding that a liveable environment will help Xiong'an attract more talented people.