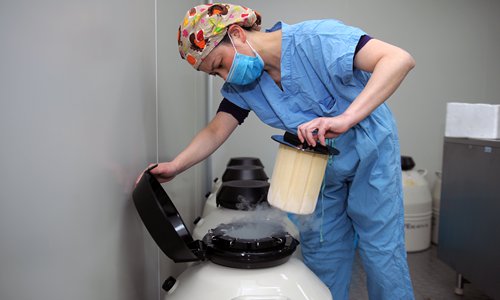 A doctor opens a liquid nitrogen storage container for sperm or eggs at the assisted reproductive medicine center of Sichuan Provincial People's Hospital in the southwestern city of Chengdu. (Photo: VCG)

Lawmakers have suggested opening egg freezing facilities for women of childbearing age in East China's Shanghai Municipality as a pilot scheme during the two sessions of Shanghai Municipality held in January."I think that China will open egg freezing to single women in five years against the backdrop trend of a declining population," proposer Xu Shanshan, a member of the Chinese People's Political Consultative Conference (CPPCC) Shanghai Committee and a lawyer of Hiways Law Firm, told the Global Times.In 2018, 15.23 million people were born in China, a birth rate of 10.94 per thousand, according to the National Bureau of Statistics in 2019. The number of newborns fell 2 million from 17.23 million in 2017.Easing strict limitations on egg freezing to stimulate the growth of the population has sparked discussion in China.Preserving fertility A 36-year-old Beijing office worker who requested anonymity told the Global Times that if the Chinese mainland relaxed its policy on egg freezing for single women, she would do it immediately. She has been considering egg freezing since she was 30 and even enquired about it in Hong Kong. But her plans were put on hold over the high costs and the difficulty of identifying qualified hospitals. "Egg freezing is a guarantee that I can have a baby in the future without worrying about the quality of my eggs," she said.Egg freezing is a method for preserving a woman's fertility so that she can try to have a child more easily at a later date. The easing of this technology has become especially important since China introduced the second-child policy nationally in January, 2016, which has great significance for population growth, Theresa S. Qiu (Qiu Suo) told the Global Times. Qiu is a member of CPPCC Shanghai Committee and a lawyer at AllBright Law Offices who submitted the proposal with Xu. To reverse the trend of population decline and an ageing population, China has adopted the second-child policy to encourage people to have more children, Qiu said.But according to the National Bureau of Statistics, about 17 million babies were born in 2017, 6 million fewer than the previous estimation of 23 million. Part of the reason for this is that some families who want a second child have begun to have trouble conceiving because of their age, Qiu told the Global Times.To respect traditional culture and family planning in China, Xu explained that they proposed easing limitations on egg freezing but maintain controls on the use of eggs.An identity card, marriage certificate and birth approval certificate are required to access frozen eggs to avoid egg selling, illegal surrogacy and other social problems. The couple also has to promise not to violate the second-child policy, Xu said.Shanghai Municipal Health Commission responded that the proposal did not comply with relevant laws and regulations and there were still many technical risks, according to Xu."I believe that reducing limitations on egg freezing in China is inevitably going to be a trend, especially given the declining population China is undergoing currently," Xu told the Global Times. She is collecting more evidence and supporting data while she plans next year to submit the proposal for egg freezing.Changing attitudesQiu told the Global Times that the National Health Commission has also relaxed its attitude toward egg freezing.According to the Measures of Human Auxiliary Reproduction Technology issued by the commission in 2001, only couples suffering from infertility who possess a marriage certificate, identity card and birth approval certificate can get access to assisted reproductive technology. This means that healthy single women in China have little access to freezing and preserving their eggs.In response to calls for the lifting of the restrictions on single women's reproductive rights after the two sessions of 2017, the commission announced that China's relevant laws do not deny the reproductive rights of single women, and Northeast China's Jilin Province has formulated regulations to allow single females to freeze eggs in light of the actual situation. The commission's official website said it would pay close attention to the development of egg freezing and other technologies, carry out feasibility studies and promote clinical applications.Relaxing restrictions on egg freezing can be regarded as a long-term development plan, Qiu said.But it was difficult to determine a specific timeline, Qiu told the Global Times. Only after the legal system has been improved can the rights of women of child-bearing age be guaranteed and then egg freezing technology will be able to play a positive role in society under more relaxed restrictions.