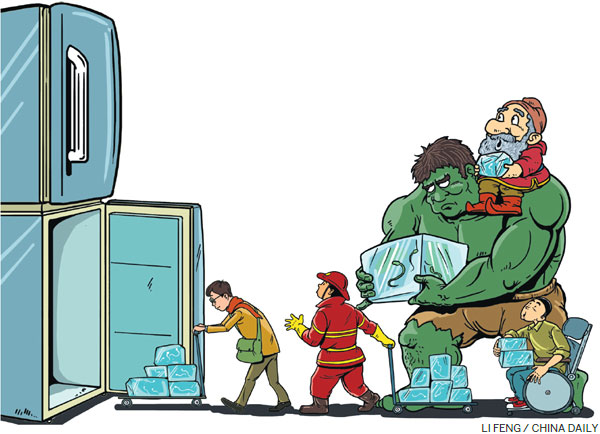 The universal second-child policy has led to a boom in demand for sperm freezing services among Chinese men, as more attempt to extend prime fertility into later life as part of their plans for another child, according to fertility specialists.

The sperm bank in Hangzhou, Zhejiang province, saw a twofold increase in the number of men who froze their sperm to preserve fertility last year compared with 2016.

Zhang Junrong, a leading physician at the government-run facility, attributed the increase largely to the second-child policy implemented nationwide in January 2016.

He said the prominent increase occurs among 30-somethings who already have a child and are considering a second one at a later age. Previously, most customers were young cancer patients without any children.

A 34-year-old man surnamed Zhou, who is a senior sales executive in Hangzhou, said he is considering freezing his sperm.

"My daughter just reached kindergarten age. I have a packed schedule, so a second child is out of my plan for now," he said on condition that his full name not be used. "But I still want to have another baby after I make breakthroughs in my career."

He is concerned that 35 could be a watershed age that signals declining fertility. "What if my sperm is no good when I desire a second child years later?" he asked.

The health-savvy Zhou, after completing prechecks, can have his sperm collected and frozen in two weeks, according to Zhang.

Since the Hangzhou sperm bank was founded in 2005, more than 270 men have used the sperm freezing and storage services, with more than 2,000 tubes of sperm safely stowed in the bank, he said.

In Beijing, the number of people who preserve their sperm at Peking University Third Hospital has increased rapidly in the past few years, due to increased public knowledge, according to Jiang Hui, the hospital's director of andrology, the branch of medicine concerned with men's health.

In 2015, when the hospital started such a business, only 17 people preserved their sperm, he said. The number increased to 117 last year－twice as many as in 2016, Jiang said.

Most of the people are below 30 years old, he said. About half of all the people had cancer, he said. The others include those who want to delay having a child and who are likely to have diseases such as diabetes, so they could preserve their sperm when they are young and do not yet have such a disease, he said.

Some employers in higher-risk sectors have also started to contact the sperm bank to keep sperm for their employees, such as military pilots, he added.

Zhang Zhichao, head of Peking University First Hospital's Andrology Center, agreed and said he saw a number of people in their 50s seeking a second child.

Theoretically, men's fertility, mainly measured by sperm quality, would last at least into their 50s, but "in reality, many have a problem with that even in their 30s", he said.

Some existing conditions like varicosity affect male fertility as well.

"It's important for the couples to go through fertility checkups beforehand. My first question for those older than 50 would be how old is your wife," he said, urging couples who are no longer young to be cautious about any birth plan.

He said that if the wife is past 40, he would recommend against pursuing another child, saying that fertility declines for men and women alike as they age.

Qin Lang, a physician at the Reproductive Medical Center of the West China Second University Hospital in Chengdu, Sichuan province, said that among all the couples age 30 and older who consulted him, more than half of the men had substandard sperm quality.

China has seen an increasing reproduction problem, with the infertile population exceeding 50 million. Half involve infertile husbands with low sperm quality, according to official estimates.

Wang Xiaoyu contributed to this story.