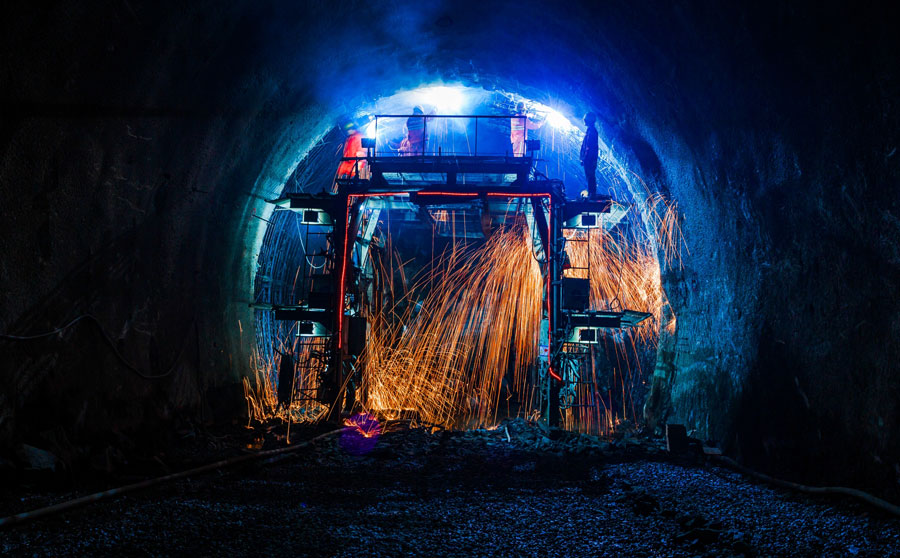 Welders work on supporting structures inside the Dazhongshan Tunnel earlier this month in Sanmenxia, Henan province. [Photo by China Daily]

Workers on Sunday morning completed the digging of a tunnel for the world's longest heavy-freight railway－which will stretch from coal-rich northern China to the country's central provinces－five months ahead of schedule, the project contractor said.

The 14.5-kilometer Dazhongshan Tunnel is being built in Sanmenxia, Henan province, by Shanghai Civil Engineering Co, a subsidiary of China Railway Engineering Corp.

It is an essential part of the Inner Mongolia-Jiangxi Railway coal freight project, which is 1,837 km long and expected to carry about 200 million metric tons a year from the Inner Mongolia autonomous region and Shaanxi and Gansu provinces to central China, including Hubei, Hunan and Jiangxi provinces.

Construction of the railway began in 2015, with total investment expected to reach about 190 billion yuan ($29.7 billion). It will run through seven provinces and regions, with work scheduled to be completed in October next year.

The railway will help optimize the country's distribution of energy resources. Coal resources in the north can be used to provide energy for the provinces of central China, said Zhang Guijun, the project's manager.

"With its economic value and standardized construction, the railway will be a new brand of Chinese railway after it goes into operation," he said.

Zhang Lin, chief engineer for the Dazhongshan Tunnel project, said building the railway is a massive challenge, as the route crosses the Yellow River twice, as well as the Yangtze River and complex mountain ranges.

"Most of it is 80 to 500 meters from the surface. The deepest point is 710 meters," Zhang said. "Digging the tunnel has been hard and risky."

He said workers came across 12 geological faults, endured temperatures of up to 50 C and experienced water bursts, but no one died because of the project's high degree of mechanization and careful planning.

Zhang said the team had also worked hard to protect the environment. Lushi county is an important water resource for the middle line of the South-North Water Diversion Project.

Wang Zhibing, another chief engineer, said the company processed more than 400,000 cubic meters of excavated rock and used it in construction.

The team also tried to help poverty-stricken local families by drilling several water wells and hiring local residents to work on the project, he added.