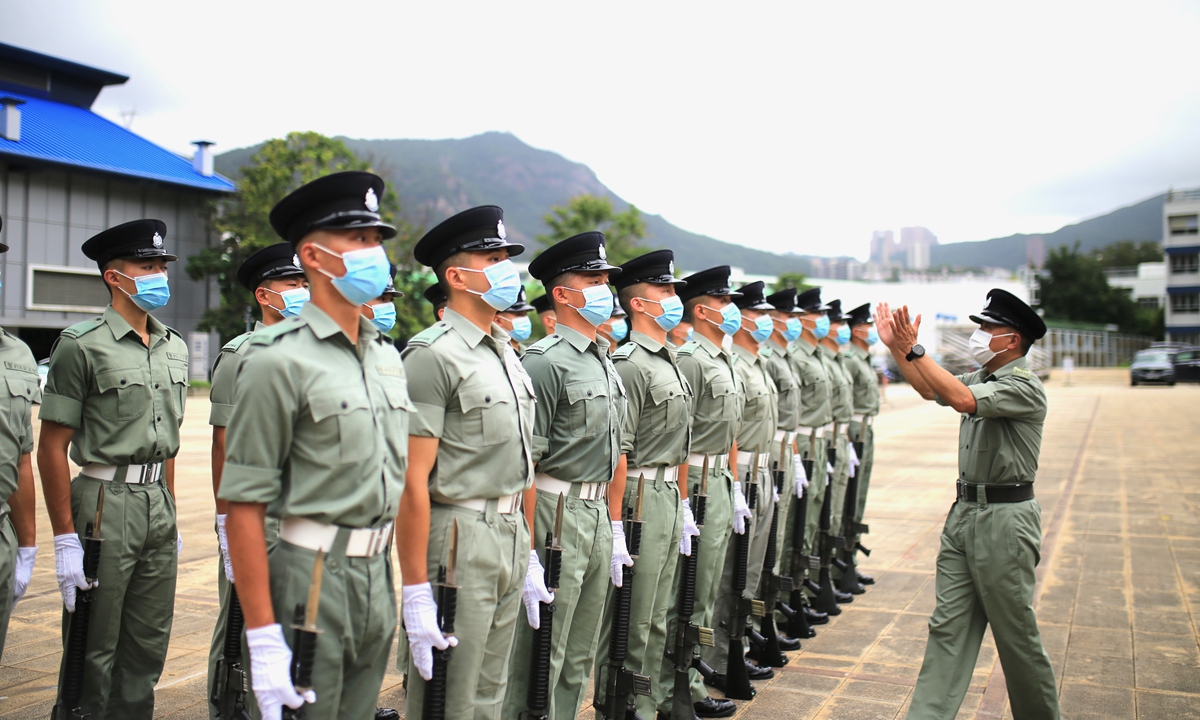 Inside the New Territories south regional headquarters of the Hong Kong Police Force, a statue of Guan Yu, a general during China's late Eastern Han Dynasty (25-220) who was known for his bravery and skill in battle, stands at one corner of the headquarters' canteen: the spirit of Guan happens to coincide with Hong Kong police's motto - Serving Hong Kong with Honor, Duty and Loyalty.

As the backbone of Hong Kong Special Administrative Region (HKSAR)'s stability, how do Hong Kong police view the city's transition from chaos to peaceful governance? On the occasion of the 25th anniversary of Hong Kong's return to the motherland, our Global Times reporter visited Hong Kong police stations to hear the stories of police officers who have been on the frontline to defend the city's legal system and stability.

I want to salute him back

"Working for the police force for 28 years, my work experience had been very uncomplicated. I just worked as a frontline patrol officer and a member of the emergency unit," Teddy Chan, the chief of the New Territories south regional headquarters of HKSAR Police Force, told the Global Times.

Chan recalled a memory of exactly 25 years ago - when Hong Kong was handed over to the Chinese mainland, he was working outside the ceremony venue as a security guard that day.

"I just remember that I was happy that night, and I could see the fireworks nearby" Chan related.

"Each one of us had a new cap badge inside our pockets, and we carefully put it on at 12am following the order of the commanding officer. We looked at each other, and in that moment, I felt I was a complete and true Chinese," he said.

But Chan, who patrolled the streets for years, slowly became aware of the worrying changes that had been taking place in the streets. He said he could clearly perceive the number of illegal assemblies that endangered national security was increasing, and sometimes thousands of assemblies took place in just one year. And police found it more and more difficult in dealing with such cases, he said.

Chan had this habit of recording his daily work and life with words and pictures and saving them in his mobile phone for reference. But he could not bear to browse again photos he saved during the 2019 social turmoil.

"During that time, I was a member of West Kowloon emergency unit, and our unit arrested over 500 people, but not one of them was prosecuted. The rioters kept attacking police. Even our families were doxed, and that was the hardest time for me," he said.

When explaining how he managed to go through those days, Chan suddenly choked up.

He said he suffered injuries to his face, neck and waist during a police operation in December 2019 and was sent to a hospital in Shenzhen for treatment.

"When I arrived at the customs, a customs officer who had figured I was a Hong Kong police officer saluted me," he said.

"It deeply touched me, as at that time we were in great need of the support from our compatriots in the Chinese mainland, and his kindness represented the sincerity and encouragement of thousands of people. If I have a chance to see the customs officer once again, I would like to salute him back," he said.

Ho Ngai-king, senior inspector at the Lantau district police station, became a police officer in 2009, much later than Chan.

"During the most difficult times in 2019, I did not go back home for nearly two months," Ho said, noting that he and dozens of his colleagues were once surrounded by thousands of rioters.

His family would often ask him whether he was safe, but he always told them that he did not have to go to the frontline and his family pretended to believe it.

"We knew we were lying to each other. We just did not want to admit it. We hid our concern for each other in our heart," Ho said.

As a young man, Ho wanted to figure out why those detained young rioters violated the laws and about two thirds of them would say they were being used when he talked to them, while some others would say they had been incited by disinformation spread online or just by profit. "But whatever the reasons were, they all felt regret after being arrested," he said.

His personal experience made Ho deepen his understanding toward the motherland. He told the Global Times that his sense of national identity grew in time.

"I was only nine years old in 1997, and honestly, I did not quite know what 'return to the motherland' meant and how it would affect me. I only remember that it's raining, and lots of officials attended the flag raising ceremony," he said.

"As I grew up, I have experienced several major events, such as SARS in 2003, the financial tsunami of 2008, the illegal Occupy Central Movement of 2014, the social turmoil in 2019 and the fight against the epidemic that began in 2020. I can now feel the importance of the support from the mainland to Hong Kong," Ho said, noting that his national identity grew gradually and he feels proud about being a Chinese. "I hope I can visit the Chinese mainland after the border reopens," Ho said.

The adoption of a Chinese-style foot drill by the Hong Kong Disciplined Services has helped remove the colonial characteristics of the city, and it will help unify Hong Kong society and fully underscore that Hong Kong is an inseparable part of the motherland, Hong Kong Junior Police Officers' Association Chairman Lam Chi-wai told the Global Times

Such a move also demonstrates that our police officers are patriots and will enhance the public awareness of their identity as Chinese nationals and cultivate the sentiment of love for their country and Hong Kong, Lam said.

Post switch: a reflection on HK going from chaos to governance

Chan is now a police chief for the traffic branch at the New Territories south regional headquarters, and his job has changed from dealing with criminal cases and defending national security to that of being a member of the traffic branch.

"I remember in the past there were cases where thugs attacked my colleagues on motorcycles and my department had more work to do in maintaining national security. So I think that the traffic branch is more inclusive, richer and more realistic. I'm very happy here" Chan said.

"If Hong Kong was still in the middle of chaos, I would not have left the emergency unit and I would still work on the frontline," he added.

Ho has also changed his position from frontline officer to a member of the traffic branch, and he has fully adapted to his new position.

He believes that their job reshuffle represents very well Hong Kong society's transiting from chaos to governance. "Thanks to the national security law for Hong Kong, society can enjoy stability and I can choose another kind of post to enjoy" he said.

Chan agreed: "I'm glad the national security law for Hong Kong has been implemented." From the perspective of a law enforcement officer, as long as Hong Kong better implements the law in the future, the city will be more stable and prosperous both in terms of public security and environment. "I am sure of it," Chan concluded.