From nurses' whites to wedding veils

For 27-year-old Wu Xianbing, his delayed wedding was well worth the wait－especially as his bride Chen Mei had made such a deep personal sacrifice to save the lives of others. 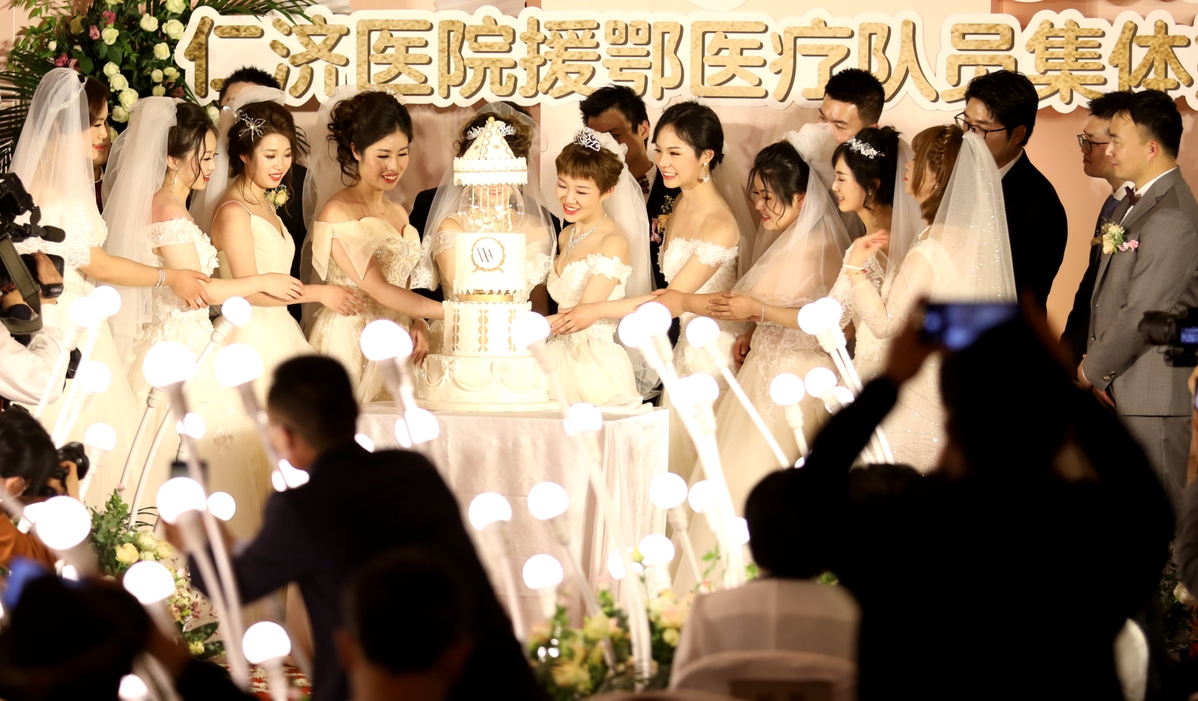 A mass wedding is held for medical workers from Renji Hospital at the Waldorf Astoria Shanghai on the Bund on Friday. The workers postponed their scheduled weddings to join the fight against COVID-19 in Wuhan, Hubei province. (Photo: China Daily)

Chen, a nurse at Renji Hospital affiliated with Shanghai Jiao Tong University School of Medicine, signed up for an emergency medical team to help Wuhan in Hubei province battle the COVID-19 breakout.

That meant the couple had to delay their wedding ceremony scheduled for Spring Festival, and a three-month separation for the love birds.

"We knew it was going to be hard but it was just the right thing to do," said Chen, who completed her 14-day quarantine and tested negative after her return to Shanghai in mid-April.

Like Chen and Wu, nine other couples, with all the brides from Renji Hospital, chose to postpone their wedding celebrations for the greater good of caring for patients.

The hospital showed its appreciation by organizing a mass wedding on Friday to help the couples commemorate their love as well as selfless contributions.

The group ceremony was held at the historic Waldorf Astoria Shanghai on the Bund, in a room decorated with ribbons and bouquets and attended only by close family and friends as social distancing is still being advised by authorities.

"Almost three months ago, the brides put on white nurse's uniforms instead of white bridal veils. Now that they are back safe and sound, it's imperative that we host a ceremony for them," said Xia Qiang, Party secretary of Renji Hospital.

"I hope they learn to respect, tolerate, understand and support each other after what they have experienced in Wuhan and through this special experience at the start of their marriages," Xia said.

Gao Yang, 29, promised to do all the domestic chores in the future. He said Wuhan had given him an insight into how intense his wife Zhang Lin's job was.

"She was too busy to respond on WeChat during her time in Wuhan. So I sent her a virtual red packet via WeChat every day," Gao said."As long as she clicked 'accept', I knew she was back in her dorm and managed to have some rest."

Hotel general manager, Richard Saul, said: "We are proud to offer a historic venue and dedicated services that bring memorable sparkle to the medical heroes' most significant moment in life. We want to express our sincere gratitude to these true heroes who protect and save people's lives with selfless efforts."

Saul said a number of special offers will be given to all medical workers－including discounts on meals and drinks and complimentary stays and perks at the hotel for their first anniversary－should any couple book a wedding ceremony at the hotel.

Tens of thousands of medical personnel began returning home in the middle March, as the pandemic markedly improved in Wuhan, the city hit hardest by novel coronavirus in China.