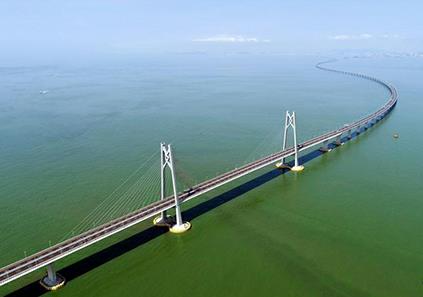 For Li Zhiping, a bus driver commuting between Guangdong and Hong Kong, the Humen Bridge is his most frequent route.

But not for long.

The Hong Kong-Zhuhai-Macao Bridge, about to open soon, will cut the travel time between the two areas from three hours to 30 minutes.

"I will definitely take this way once it opens. It will be faster and no traffic jams, making things convenient for everyone," Li said.

Meng Wei, spokesperson for the National Development and Reform Commission (NDRC), said earlier this year that the major tunnel project for the bridge was completed in February and preparation was underway for the official opening.

The 55-km bridge, situated in the Lingdingyang, or Lingding Channel of the Pearl River Estuary, is an example of the connectivity of infrastructure in the development of the Guangdong-Hong Kong-Macao Greater Bay Area.

On July 1, 2017, Xi Jinping, general secretary of the Communist Party of China Central Committee, attended the signing ceremony of the framework agreement on the development of the Guangdong-Hong Kong-Macao Greater Bay Area, which covers Hong Kong and Macao special administrative regions, as well as nine cities in Guangdong including the first-tier cities of Guangzhou and Shenzhen.

With the support of the central government, Guangdong, Hong Kong, and Macao will improve collaboration mechanisms and facilitate win-win cooperation to build a world-class bay area and city cluster.

The Hong Kong Section of the Guangzhou-Shenzhen-Hong Kong Express Rail Link, which links Hong Kong with the mega high-speed rail network of the Chinese mainland, is also expected to begin operation in the third quarter of this year.

Policies for improved transport facilities, as well as expedited employment, education and medical services for people from Hong Kong and Macao in the mainland are also in the works.

"With promising career prospects, good income and a more friendly working and living environment, I feel like staying here even longer," said Hong Kong resident Kevin Lee who started working in Shenzhen, in 2015.

In May, the Ministry of Science and Technology and Ministry of Finance encouraged colleges and research institutes in Hong Kong and Macao to join in science and technology initiatives financed by the central government.

The decision to establish the Hong Kong-Shenzhen Innovation and Technology Park was published in 2017, and a business hub for start-ups was unveiled in the city of Zhuhai in Guangdong in July.

So far, six Hong Kong colleges have set up 72 research institutes in Shenzhen to turn discoveries into practical use.

Over the past year, the NDRC and authorities of Guangdong, Hong Kong, and Macao have joined hands to carry out the framework agreement on the Guangdong-Hong Kong-Macao Greater Bay Area development.

The economic and trade cooperation and investment among the three areas experienced a strong year in 2017.

Over 12,000 companies from Hong Kong and Macao entered the pilot free trade zones in Guangdong.

"Based on the framework agreement, all parties -- from the government, business sector, education and research circles, to the public -- are joining forces to put the words into actions to develop the Guangdong-Hong Kong-Macao Greater Bay Area," said Wang Fuqiang, an official with the China Center for International Economic Exchanges, a government think tank.