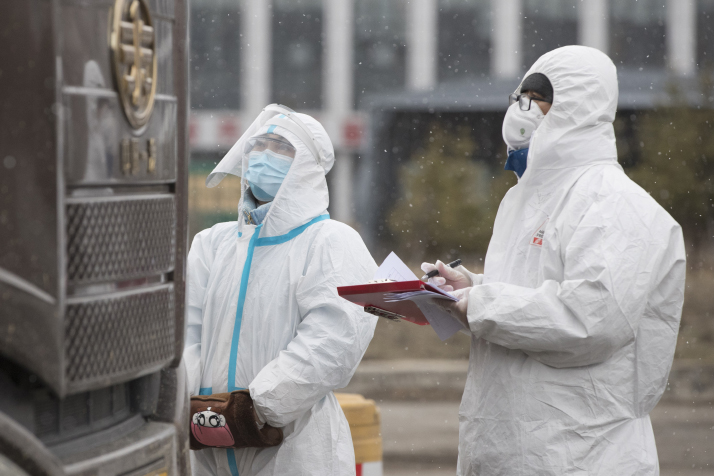 Epidemic prevention and control personnel in Suifenhe work in snow at an entrance to the city on April 22. (Photo: Xinhua)

As most areas in China started to lift lockdowns and incrementally resume normal life, Suifenhe, a sleepy border city in the northeast of the country, was put on the map by a surging number of imported coronavirus cases.

The inconspicuous county-level city in Heilongjiang Province has received an influx of Chinese nationals from Russia since late March, of whom hundreds have later tested positive for the coronavirus. This has brought the town, with a population of about 70,000, into the spotlight.

Li Entai, a 76-year-old who has lived in the area his entire life, remembered the last time the city got national attention was in 1987 when it bartered apples and thermal flasks for flatfish and walleye pollock with the neighboring city of Pogranichny in Russia.

It was the first trade deal for the two cities since the start of the reform and opening-up policy, marking a new step in trade between China and Russia. Suifenhe has since become a bustling border trade hub.

Since the outbreak in Wuhan, capital city of Hubei Province in central China, Suifenhe went on lockdown, like many other cities, in early February. And because it didn't develop any cases, it lifted the lockdown at the end of February. By March, the city had gradually resumed normal work and life.

The change came with the first infected person coming from abroad entering the city through a highway on the border with Russia on March 26. A 21-year-old Chinese man with no symptoms tested positive for the coronavirus.

By then, the focus of virus control and prevention had shifted from domestic to imported cases, with more attention given to international airports in big cities like Beijing and Shanghai. Few could have foreseen that a weak link lay in this remote border area.

In Heilongjiang, there are altogether 25 ports of entry from Russia. With the epidemic getting more severe in Russia, Chinese people stuck there couldn't buy an airline ticket due to the limited number of flights. Suifenhe became their only hope of getting back home.

Information from the National Health Commission (NHC) showed that most of the confirmed patients in Suifenhe were from two large markets in Moscow, which indicated that they had made a long journey to Suifenhe.

Passengers first took a flight from Moscow to Vladivostok and then traveled about 200 km, transferring from one vehicle to another several times until they finally got to the highway port of entry in Suifenhe.

Hao Jun, an official from the Heilongjiang Provincial Health Commission, said at a recent press briefing that the long and exhausting journey in a closed environment worsened the situation. Some who were infected got sicker and may have infected more people.

After the first case, the number of confirmed cases began to rise in Suifenhe. NHC figures showed that from March 27 to April 20, a total of 2,497 people entered China's mainland through Suifenhe. Among them, 377 were tested positive for the coronavirus.

The intensive demand for testing and treatment for the inbound people put great pressure on the small city, which didn't have enough beds or medical workers. The daily testing capacity was for only 96 people, far from what was needed, since on any given day, hundreds of people were swarming into the city. As a result, all Suifenhe hotels were taken over for quarantining the returnees.

Starting on March 31, the provincial government deployed medical workers and testing facilities from other cities in the province to Suifenhe, while medical workers from other provinces also rushed to help. Some asymptomatic patients could get treatment in Suifenhe, but others with more serious symptoms were transferred to Mudanjiang, the city that has jurisdiction over Suifenhe.

Du Hongbin, a nurse from Mudanjiang who had just returned from Hubei after supporting the anti-epidemic battle there, went to Suifenhe immediately after he completed his quarantine period.

"Many of my coworkers from Hubei made the same decision with no hesitation," Du said. "We are more experienced in dealing with the epidemic. It is our responsibility."

On April 3, the city released an online notice asking for some 100 volunteers. Within three hours, 800 locals had applied. Song Qiong, who runs a home improvement company in Suifenhe, applied right away. In February, he had worked as a volunteer during the epidemic in the city for over 10 days. 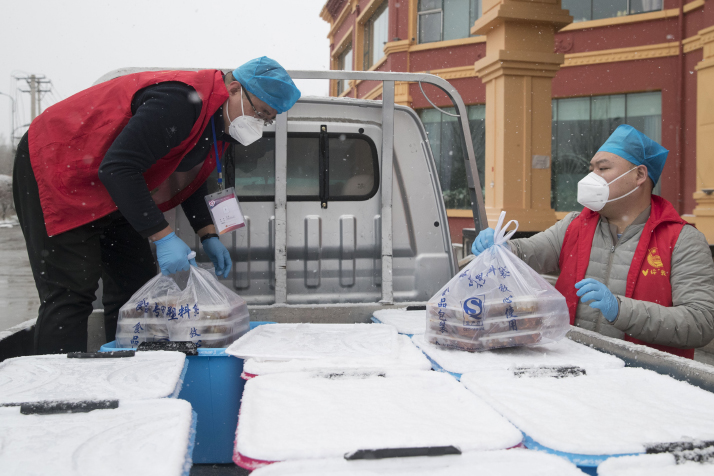 This time around, his job is to deliver three meals a day to medical workers in five different hospitals. Every day, he gets up at 4 a.m. and drives to a restaurant to collect 280 boxes of prepacked meals. It is an onerous duty since the temperature in Suifenhe can fall below zero degree Celsius.

On April 6, a project to transform an office building into a makeshift hospital kicked off, with over 200 volunteers joining to clean the building beforehand. They completed the work in just two days. On April 11, the makeshift hospital with about 400 medical workers was put into operation, adding 600 beds for patients with the novel coronavirus disease (COVID-19). It is intended to treat only less serious cases.

Meanwhile, the city has adopted strict measures to prevent the spread of the epidemic by banning all types of gatherings and drawing up a list of businesses that must close. Since April 8, all community compounds have been on lockdown again, and only one person per household can shop for essentials once every three days. Volunteers are again positioned at compound entrances, working around the clock in freezing temperatures to check everyone's body temperature and make sure strangers do not enter.

In addition, under bilateral agreements between China and Russia regarding state border operations and checkpoints, the Suifenhe passenger corridor checkpoint has been temporarily closed since April 7.

The provincial and local health commissions have provided 15 special ambulances and over 3,400 medical facilities. On April 16, the local government distributed 220,000 free masks and 25 tons of disinfecting alcohol among residents.

All these efforts have proved to be successful as there had been no domestically transmitted cases in the city as of April 23. On April 14, the first patient was discharged from hospital and on April 21 and 22, a total of 16 people were able to leave hospitals. They still need to go through a 14-day quarantine before they go back home.

Hao, the official from the provincial health commission, said that there are still some medical teams from Mudanjiang and other regions in the province with over 1,000 medical workers ready to go to the frontline if needed. "It is not the time to relax," Hao said. "We are still at a critical stage in the battle against the coronavirus."