CHINA Frontline photographer: the meaning of photography during a crisis like coronavirus

Frontline photographer: the meaning of photography during a crisis like coronavirus Editor's note: Liu Yu is a senior photojournalist from Xinhua News Agency and a member of China Photographers Association (CPA). In late January, he was assigned by CPA to take photos of frontline medical health workers in Wuhan.

When Liu Yu arrived at the Leishenshan Hospital, he spotted Wuhan photographer Huang Lei among a crowd of people. She was standing high on a ladder, which gave her a wider view to witness the hospital’s closure.

Huang is not a professional but obsessed with taking photos, a fact Liu learned a few days after their first encounter in Wuhan two months ago. Her camera focused on everything and in recent years she is intrigued by the city’s urban development. 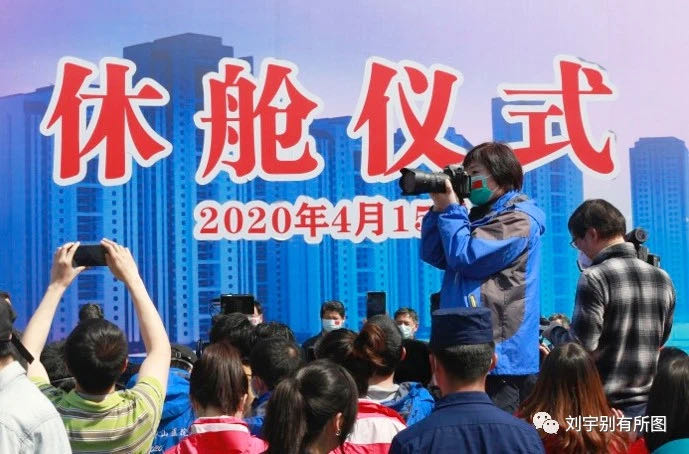 Huang Lei is taking photos at a ceremony marking the retirement of Leishenshan Hospital on April 15, 2020. (Photo: Huang Lei) 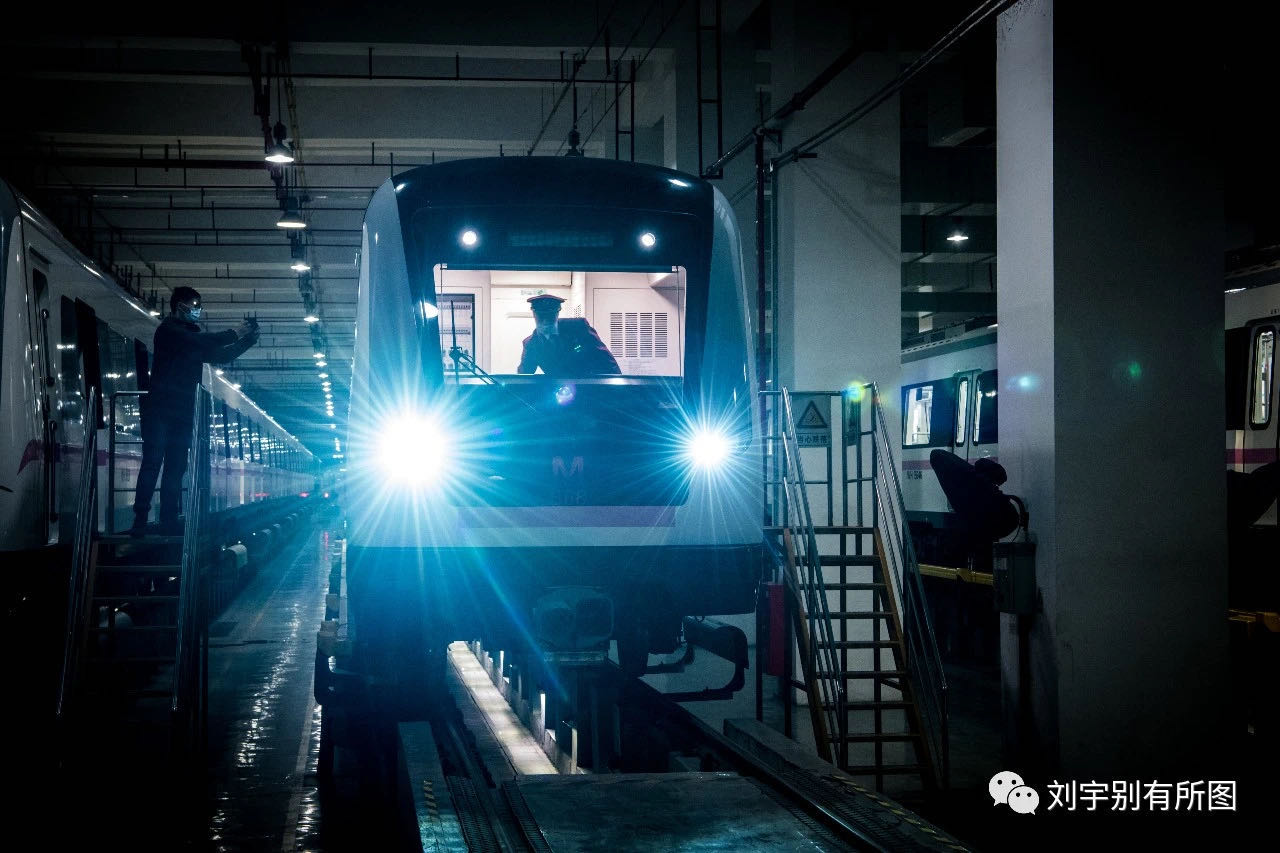 Workers test the train system, making it ready for Wuhan’s metro to restart on March 28 after a 65-day shutdown. (Photo: Huang Lei)

Huang boasted she had visited almost every structure along the Yangtze River, which runs through the city. “When look at the riverscape from the top of the city, I feel proud of it.”

As a photographer, she didn’t overlook the rise of two emergency field hospitals in Wuhan, the previous coronavirus epicenter in China. 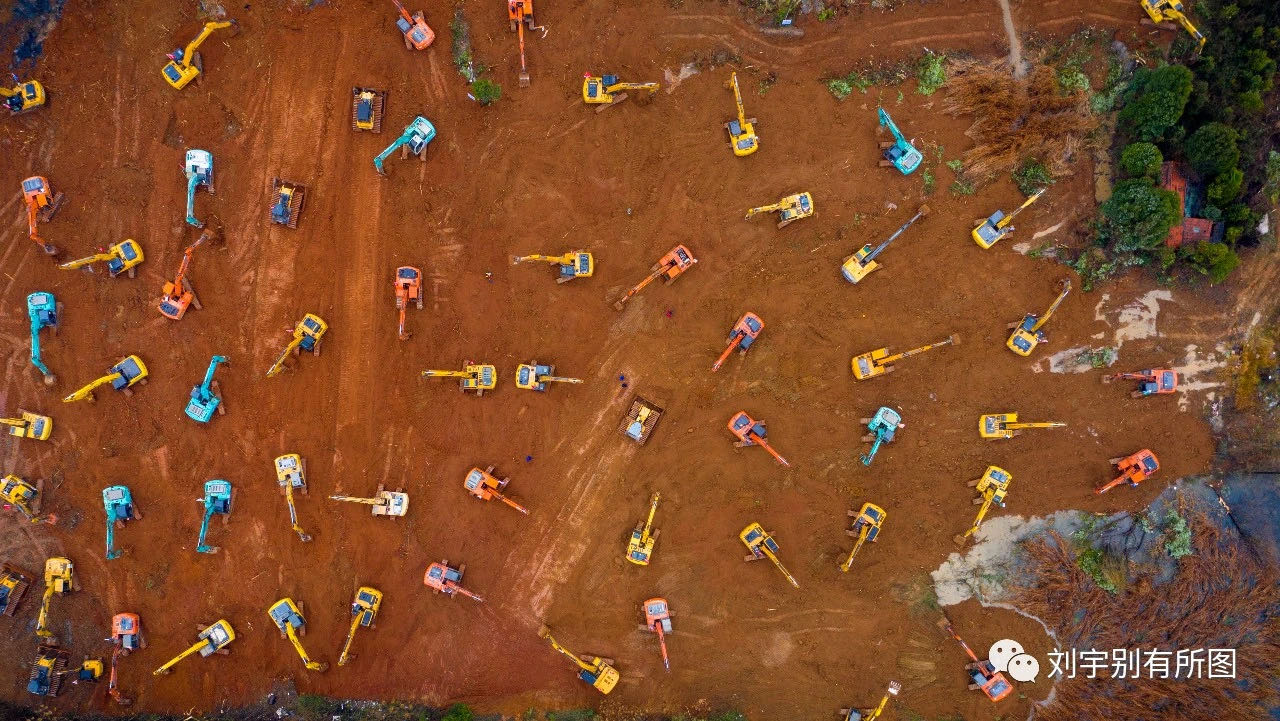 Excavators are seen at the construction site of Huoshenshan Hospital on January 24, 2020. (Photo: Huang Lei) 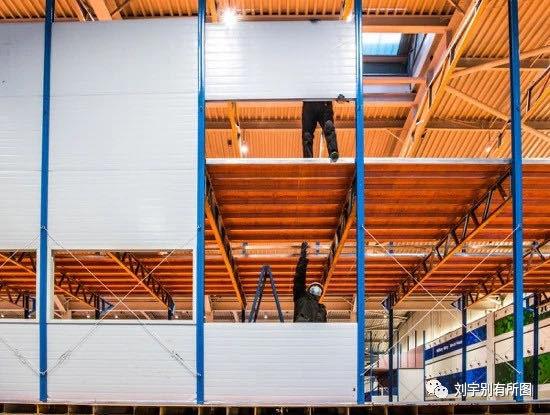 Workers are assembling a lounge for medical personnel at Leishenshan Hospital on January 28, 2020. (Photo: Huang Lei)

Huoshenshan Hospital first broke ground soon after the city’s lockdown order took effective on January 23, then Leishenshan followed two days later. Huang swayed back and forth between the two hospitals from the initial days of construction.

There were over 20,000 construction workers on the two sites during the busiest days, many of whom came to help with the projects spontaneously, using their own equipment and machinery.

Huang said these construction workers were heroes and miracle creators and she would have regretted if she was not there as photographer. 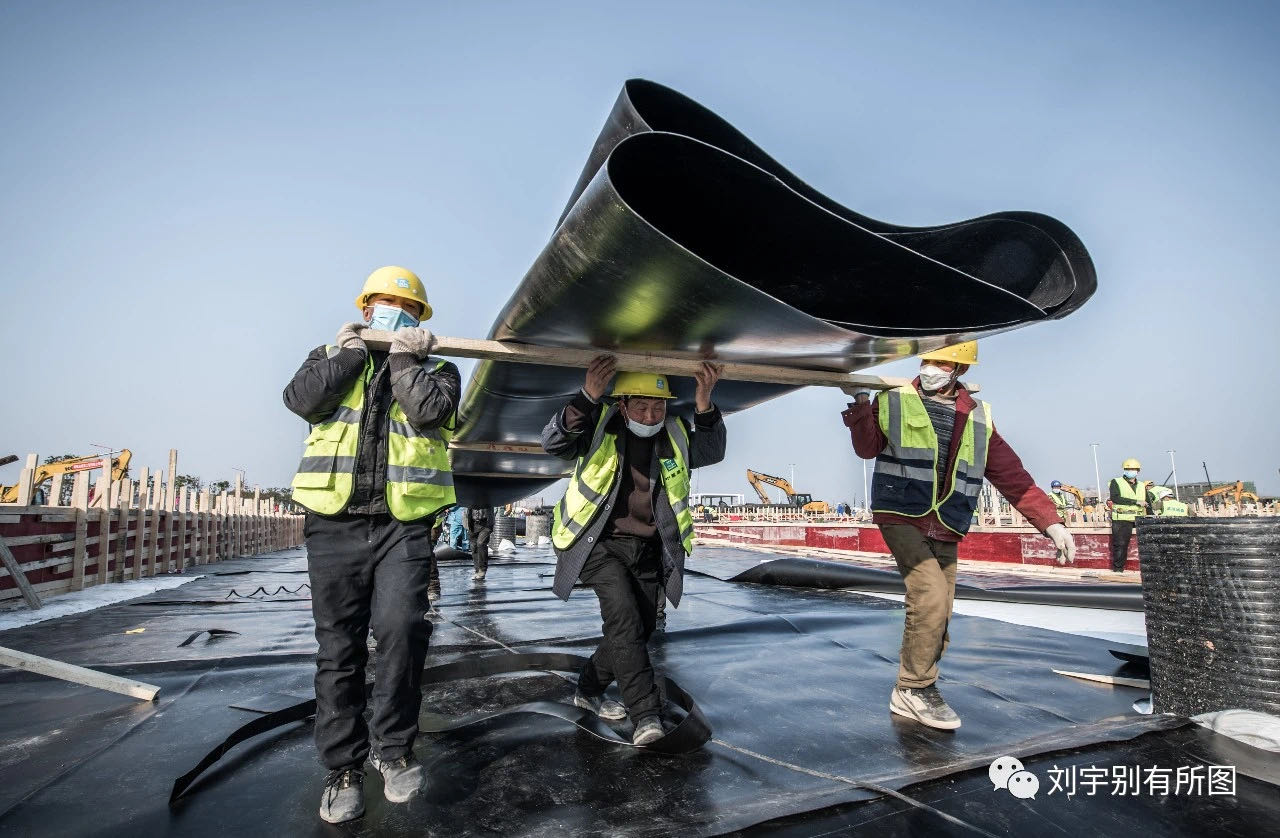 Huang remembered it rained quite often during the construction period. The ground was drenched and turned very muddy. Huang spent three hours in the early morning taking photos at Leishenshan Hospital on February 8, the first day the hospital started operation. After returning home, she was struck by an alarming fact: she had a fever and started to cough, typical symptoms of coronavirus infection.

“I was scared,” Huang recalled. “If I brought the virus home and infected my husband, I would hate myself.”

A major surgery impaired the health of Huang’s husband 10 years ago but his support of his wife’s love to photography remained solid.

Four days later, Huang and her husband went to the hospital. The CT scans showed both of them were not critically ill but were unable to rule out the possibility of a coronavirus infection. Huang then confined herself at home for almost a month. The stay-at-home order came later and the community was the only place she can reach and community volunteers became her main target. 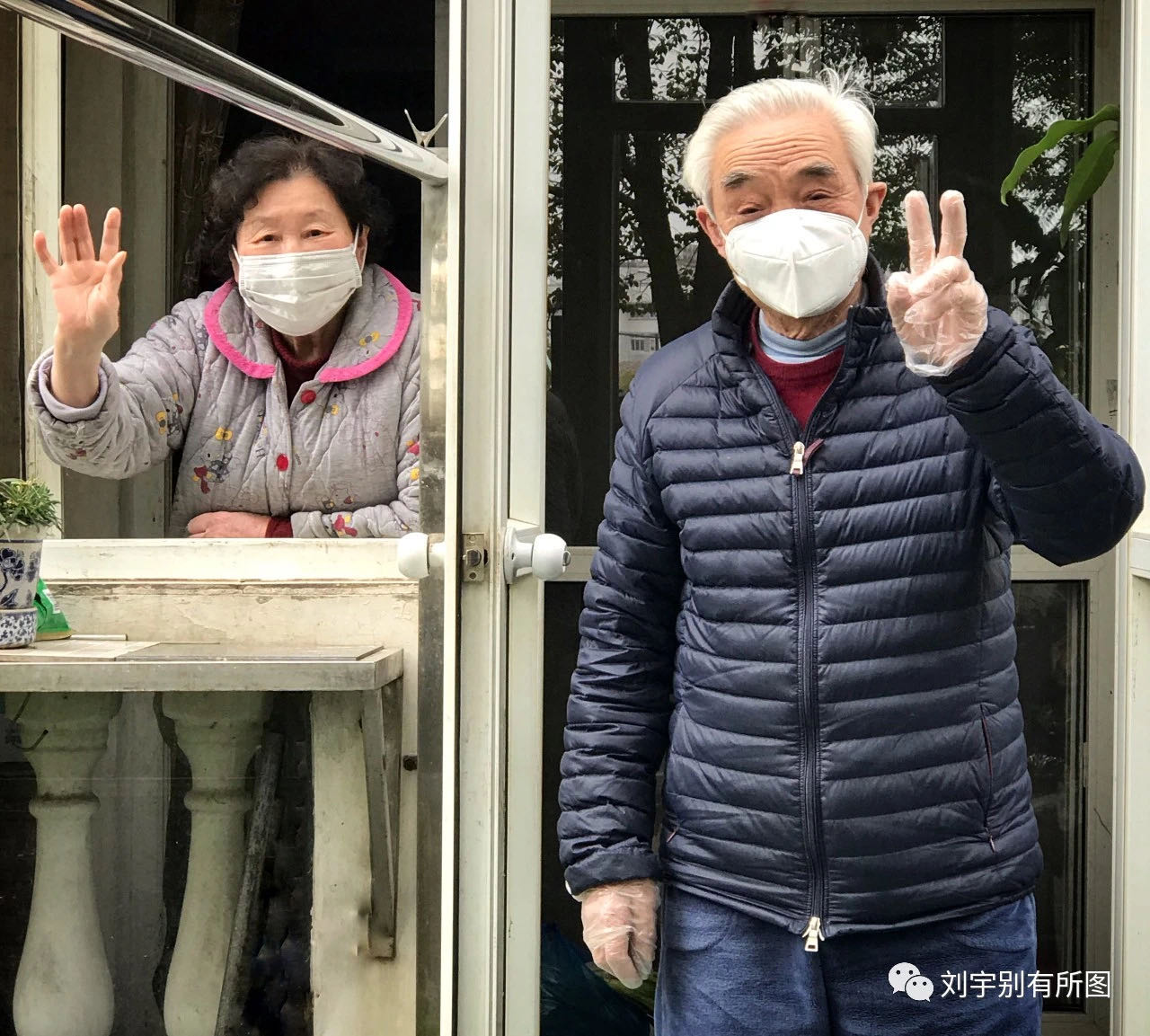 Photo shows Huang Lei’s parents who met their daughter on February 19, 2020, the first time since the lockdown, despite living in the same community. (Photo: Huang Lei)

Huang’s father also needed her extra attention. In 2018, Huang’s father was diagnosed with gastric cancer and cancer cells had spread to lungs. Her father’s health had improved after undergoing a two-year treatment and medicine.

When the virus hit, the hospital which Huang’s father went for treatment postponed cancer treatment and shifted all resources to coronavirus patients till now.

“My father can’t get examination nor chemotherapy right now and I don’t like to take the risk of bringing him to the hospital. He is prone to infection because of the weak immune system,” Huang said.

Huang said perhaps the military experience granted her father the inner strength to stay strong during these rough times. 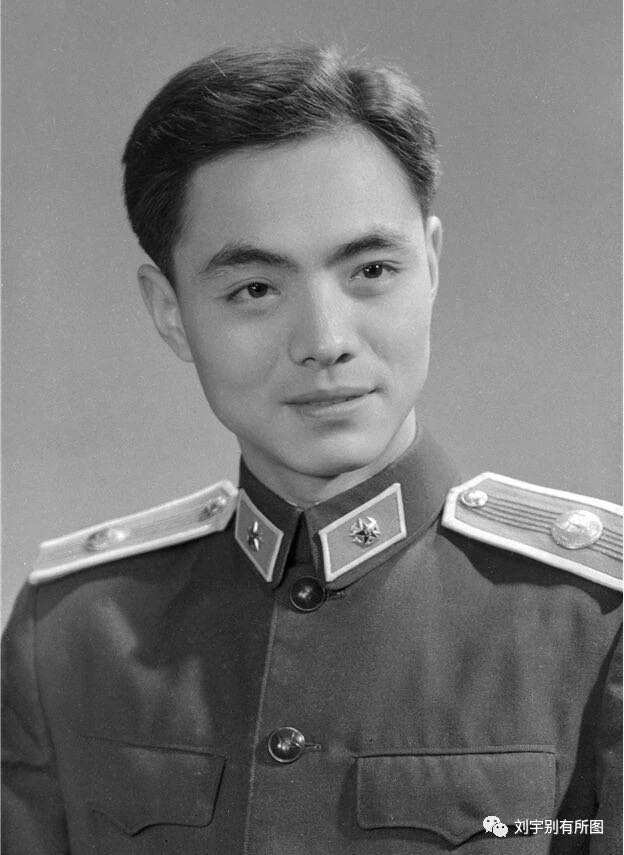 An undated photo shows Huang Lei’s father in military uniform when he was younger. (Provided by Huang Lei)

“My father told me that the acute pain in one leg forced him to rely on the other when he was cooking. It hurts me. He is a nice and meticulous man. A cancer patient should have been looked after and he looks after us instead,” Huang said.

Liu believed it’s photojournalists’ duty to be on the frontline of news events, which is irrelevant to amateur photographers like Huang. When the nightmare like coronavirus outbreak disrupted normal social order and took people’s lives, Liu figured out it’s their love for their hometown and photography that gave them strength to stand out there with cameras. 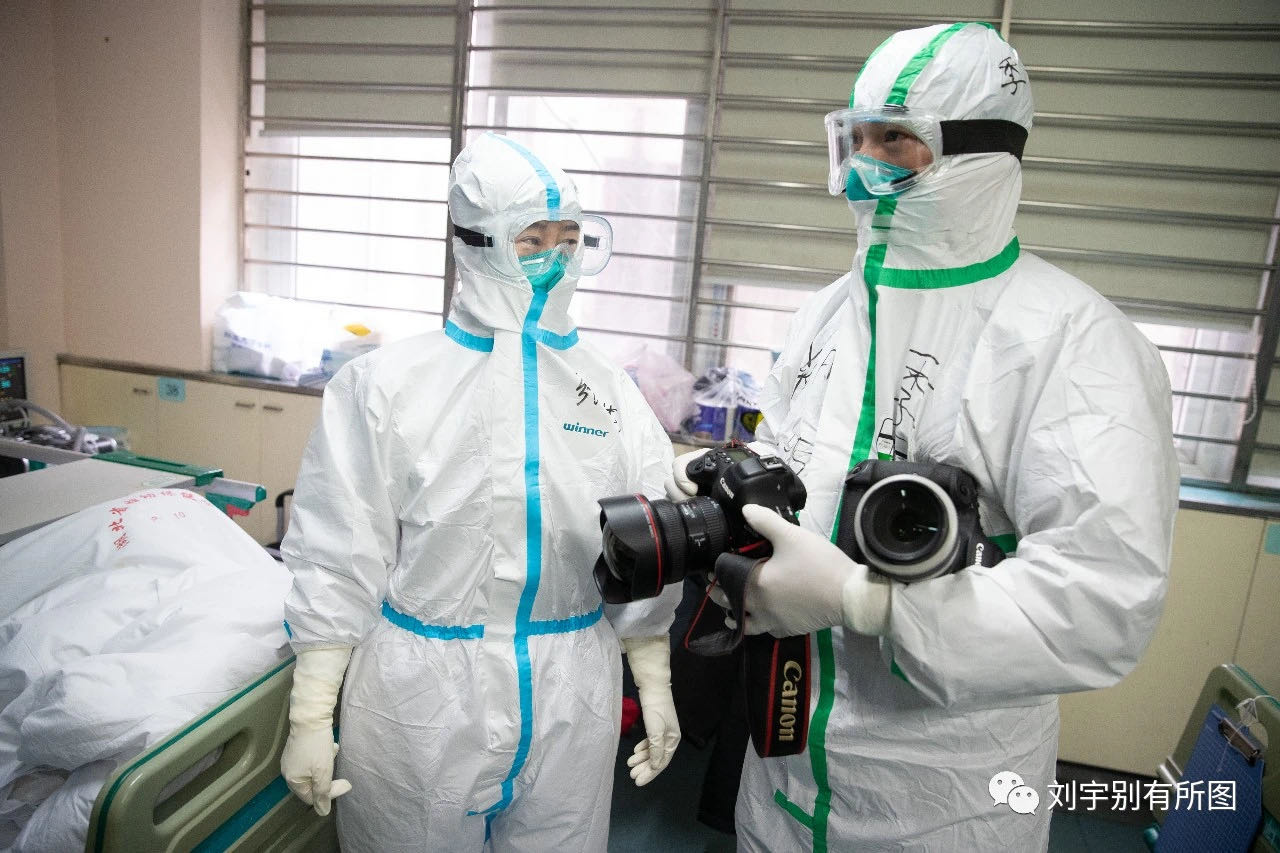 Ji Chunhong (Right) talks with Zhang Jixian, a Wuhan respiratory doctor who is hailed as the first doctor to alert the medical system of novel coronavirus on March 11,  2020. (Photo: Ke Hao)

Ji Chunhong is a Chinese photojournalist who arrived in Wuhan when the epidemic initially broke out. Ji said his camera has never focused on bloody scenes or anything that will likely evoke emotional trauma over the past 20 years.

He carried through this self-imposed rule in his reporting over the devastating earthquake in Wenchuan, Southwest China’s Sichuan, in 2008. He said he saved the film for survivors, who were able to tell their hardship and anticipation of post-quake life. These would be the spotlight to lead more people to recover from these disasters, Ji explained. 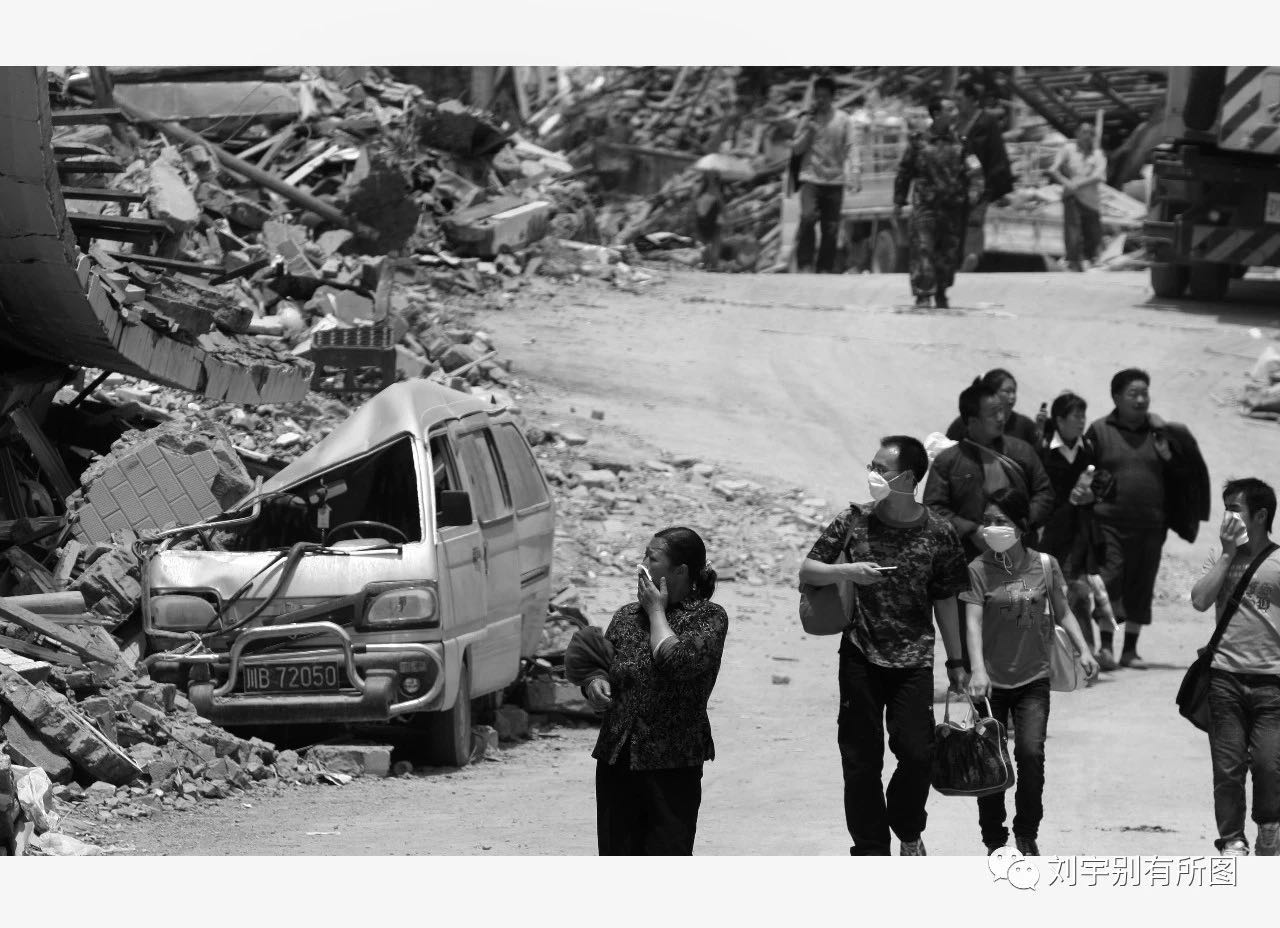 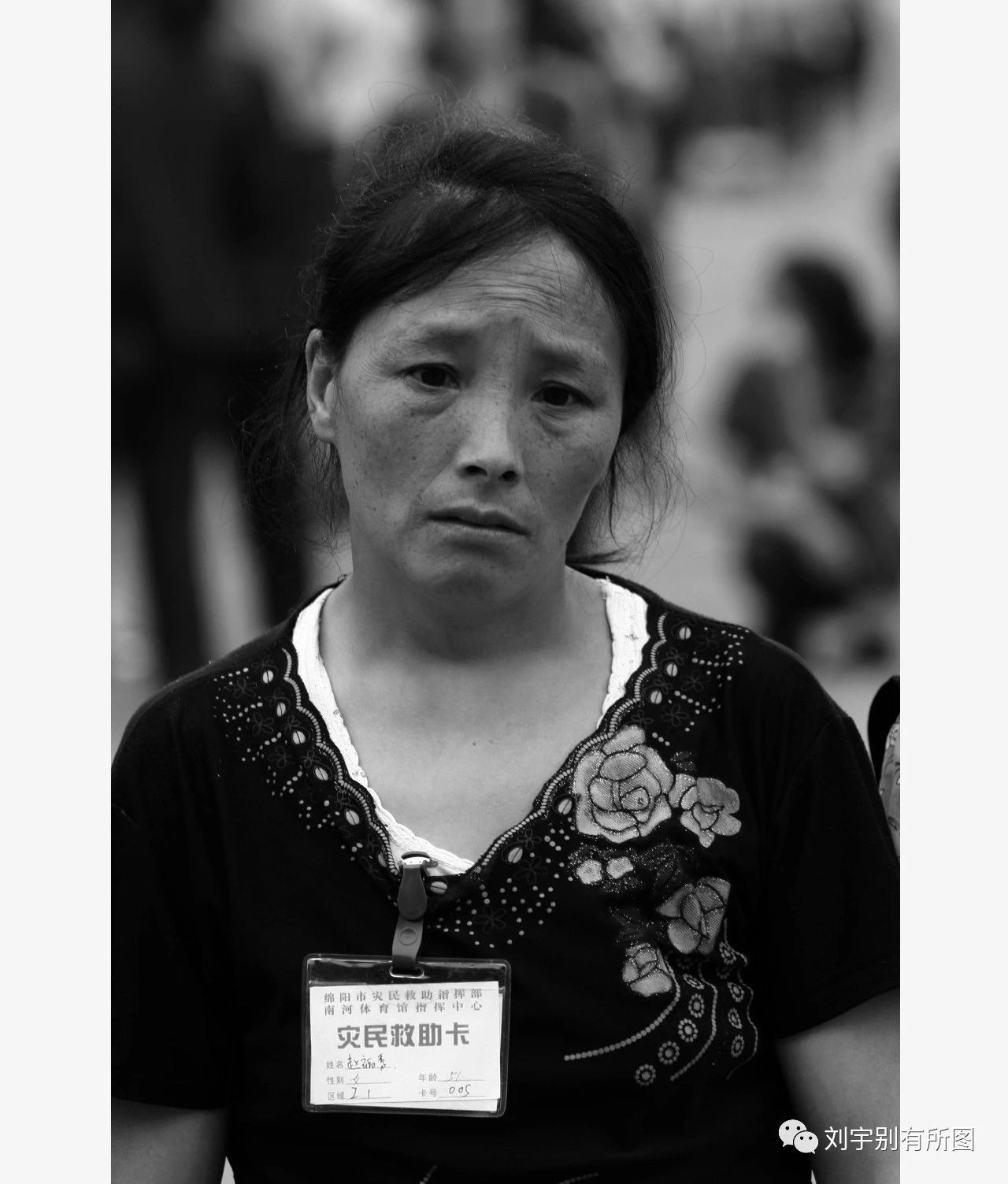 A woman walks out of shelter tent and falls silent as she remembers the earthquake victims in Southwest China’s Mianyang City on May 19, 2008. (Photo: Ji Chunhong)

He remembered the encounter with a basket-clad old woman in her 70s and a dog was her only companion. The survival instinct prompted her to run away from the rubble like many others but she had no clue about where to stop. Ji burst into tears when listening to the woman’s account.

Photos light up Ji’s personal life too. Ji’s father passed away in his arms. When he missed his father, Ji would refresh his memory with old photos, which helped bring him back to a time he spent with his father. 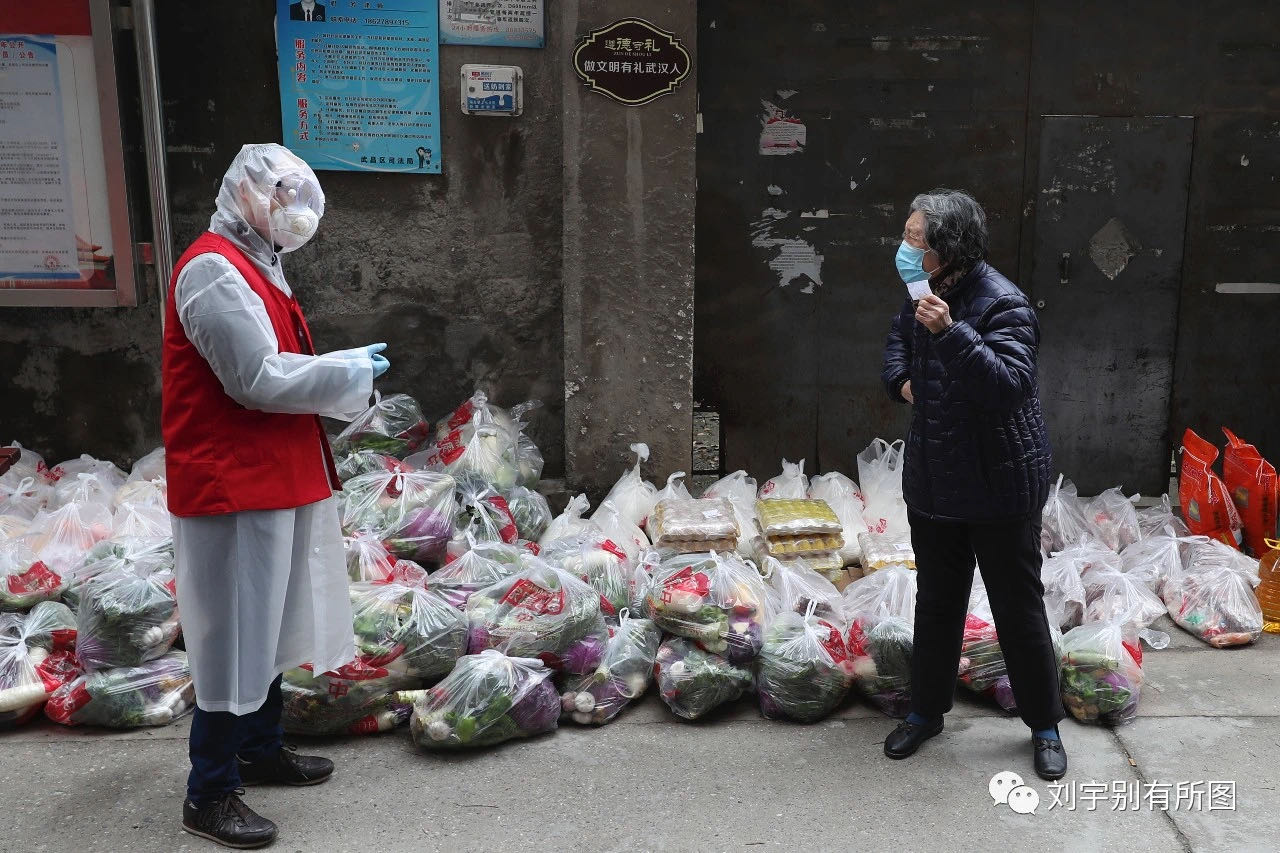 A resident asks a volunteer about the supply information of life essentials in Wuchang District, Wuhan, on February 26, 2020. (Photo: Ji Chunhong)

To photographers, the camera is only a tool that frames a small fraction of ever-evolving life and photos can be misleading. The message photographers intend to convey through photos embodies the meaning of photography, Ji told Liu.