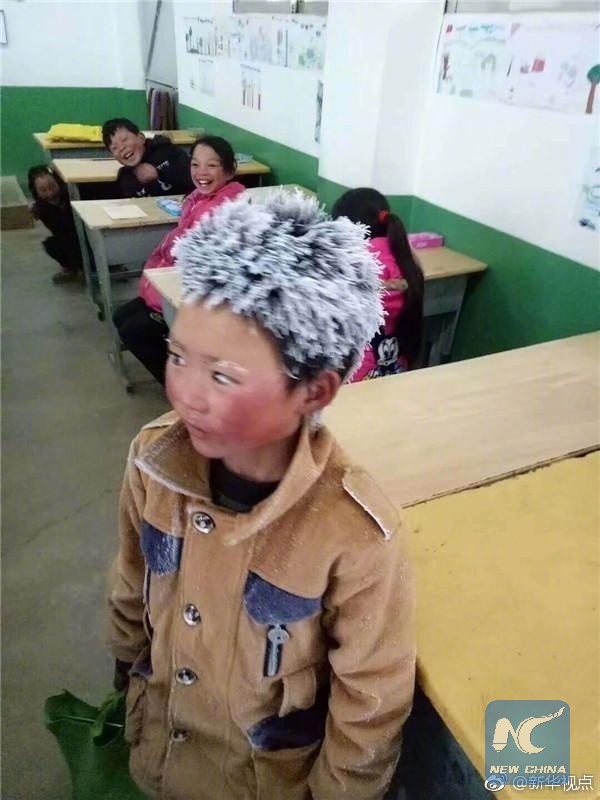 The picture of Wang Fuman with icicles on his hair went viral among Chinese netizens. Photo: Xinhua

A local youth foundation in Yunnan Province launched a fund-raising campaign after a boy covered in frost became an Internet sensation in China.

Third-grader Wang Fuman received his frosted look and chapped cheeks after a 4.5-km walk from his home to school on a freezing day in Ludian County, a rural area in southwest China's Yunnan.

The freezing temperature had covered his hair, eyebrows and eyelashes with frost, making him look like a snowman. His teacher snapped a photo of him and posted it on WeChat, a popular Chinese messaging app. Wang's story soon moved millions of Chinese netizens, who called him "frost boy," with many making donations.

"It was the first day of the final exam, but when entering the classroom he pulled face and every one was amused," said Fu Heng, the school headmaster.

While his picture was going viral on the Internet, Wang Fuman was simply getting on with his exam, scoring 99 out of 100.

Sitting at an elevation of 2,850 meters, the school in Zhaotong City receives students from the nearby 16 villages. There are eight teachers and 141 students at the school, with one of the children having to get up at 5:30 a.m. and walk three hours to school.

The city has over 1.13 million people living under the poverty line, of which 138,000 are primary school students -- that is almost half of the total number of students attending schools.

Many people have since offered the boy warm clothes and donations. The Youth Development Foundation of Zhaotong City had received more than 500,000 yuan (around 77,000 U.S. dollars) as of January 15. The first batch of 100,000 yuan was delivered to rural schools, including Zhuanshanbao primary school where Wang studies. 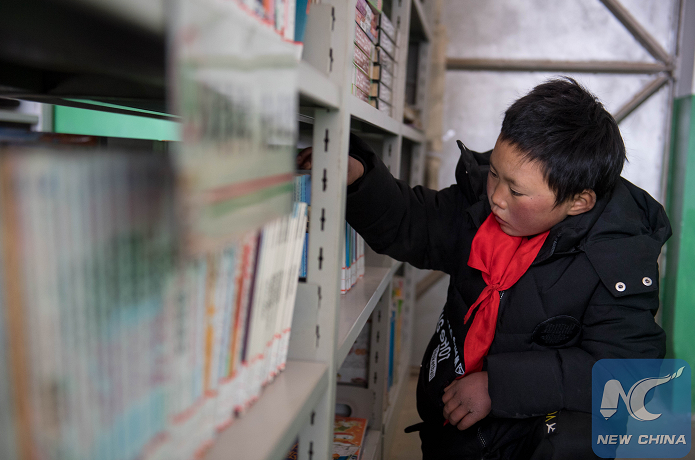 Wang Fuman at the library of his school. Photo: Xinhua

"The donations will be used to help poor left-behind children who live in regions with low temperatures overcome winter coldness," said Chen Yu, office director with the foundation.

According to Chen Furong, the county's educational bureau head, local authorities plan to offer gloves, coats, hats and winter shoes to more than 1,300 students who study at schools at an altitude of more than 2,600 meters in Ludian.

Chen added that the authorities will install two heating furnaces in each classroom in 45 schools with an altitude of more than 2,000 meters.