Despite previously studying clothing and fashion in Beijing, Wu Zhuqin moved back to her hometown in Shanxi province to pursue her apple dream in 2012, and in 2014 established the Niu Village Qing Qing Apple Plantation Professional Cooperative, with 150 members based in Niu Village, Yuci district. The cooperative brought together two villages, 615 households and 2,487 rural villagers, currently covering an area of 4,200 mu (about 692 acres) to produce mainly organic apples and related products. 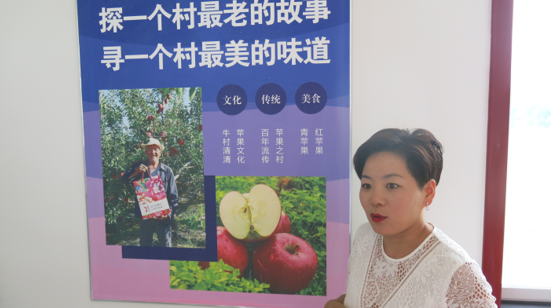 Wu Zhuqin tells reporters about the growth of her apple cooperative next to a poster about the business, on June 25. [Photo by Chris Georgiou / China.org.cn]

Wu was born in Niu or "Cow" village, which has a 40-year history of growing apples. It is located at a latitude of 37 degrees north, in Shanxi province. "The latitude is very suitable for growing here, with the right amount of sunlight to make it sweet. We have individual customers from Hong Kong buying our apples, who pay over 200 yuan for the shipping fee alone," Wu said.

Local farmer Shi Jinhua used to grow apples independently for very little money before deciding to join and work for the cooperative: "Before I had only about two mu of land, and could only make around 10,000-20,000 yuan a year," said Shi. "However, after I joined the cooperative, I can now work with 14 mu of land and make up to 100,000 yuan a year, due to the benefits and assistance that I now have access to in terms of packaging, marketing strategy and technology, as well as much stronger bargaining power together… which before I didn't know about," she added.

The cooperative also includes a youth entrepreneurship service platform, which is engaged in apple tree planting, storage, e-commerce, marketing and related technology. The cooperative adopts a model of direct production and marketing, or as they call it, "field to dining table."

The orchard uses solar powered insect traps to capture insects at night, so that the apples can be grown without the use of pesticides. "Most of the nutrients are in the skin of the apple, so you don't have to worry about eating the skin," explained Wu.

Wu said she employs over 20 full time workers and over 90 seasonal workers. People can sponsor a tree for 1580 yuan (about US$236) a year and receive 50 kilograms of apples.

As a modern professional apple farmer, Wu has gone from strength to strength, winning several awards including honorary titles of "New professional peasants in Shanxi province" and "Leader of youth gaining wealth in rural areas." In June and September of 2016, Wu was also elected as a member of the Yuci District People's Political Consultative Conference and a deputy to the People's Congress of Jinzhong city.

In March 2017, Wu's productive growth led to her signing a contract with Bai Yunfei, a purchaser for Beijing Xinfadi Agricultural Products Market, for the supply of 50-70 million jin (25-35 million kilograms) of apples in the autumn, accounting for one-sixth of the total fruit yield in Yuci district and a market value of over 100 million yuan. 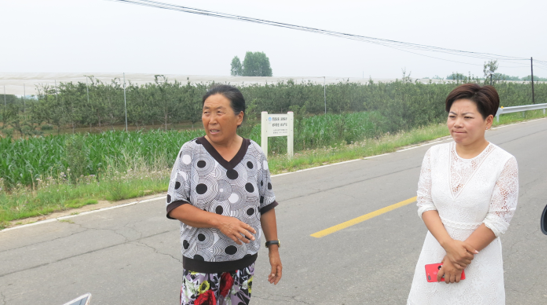 Local farmer Shi Jinhua, left, tells reporters how her standard of living has improved since joining the cooperative. [Photo by Chris Georgiou / China.org.cn] 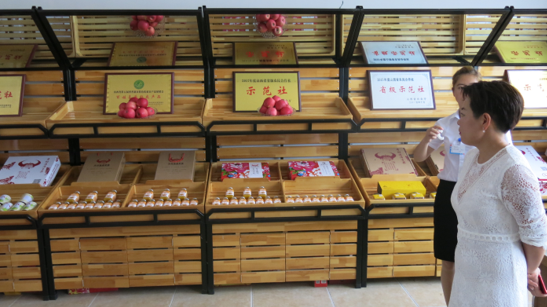 Apple related products on display that are currently available on the market. [Photo by Chris Georgiou / China.org.cn

A solar powered insect trap used to capture insects at night, so that the apples can be grown without the use of pesticides. [Photo by Chris Georgiou / China.org.cn] 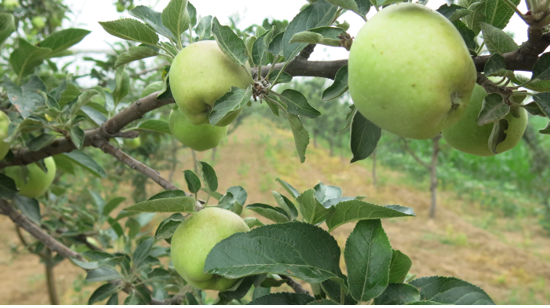 Apples grow in the orchard a few months before harvest season. [Photo by Chris Georgiou / China.org.cn] 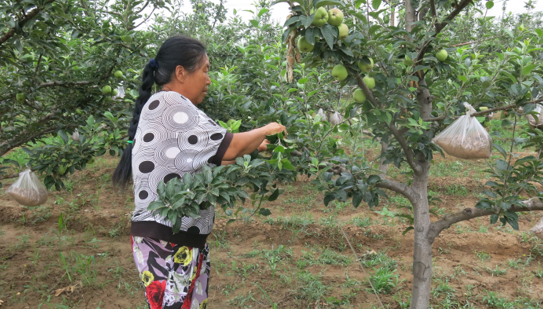 Local farmer Shi Jinhua tends to the apple trees. Weights are used to lower the branches, maximizing the amount of sunlight that reaches the leaves in order to sweeten the taste of the apples. [Photo by Chris Georgiou / China.org.cn] 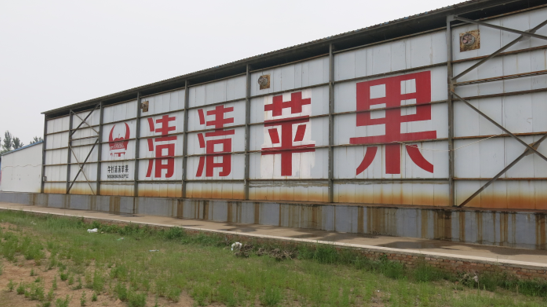