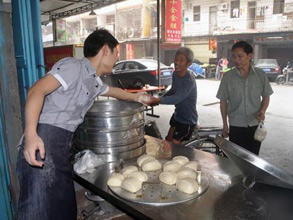 A steamed bun shop in Shishi, East China's Fujian province, has offered around 2.6 million free buns to the poor for the last eight years, China Youth Daily reported on Sunday.

The buns at Eternal Sunshine Steamed Bun Shop are not for sale — they are provided to those in need of help in local regions. Laid-off workers, impoverished families, unemployed graduates, scavengers, the poor, elderly and homeless can eat at the shop for free.

In operation since 2011, the eatery is funded by a post-80s man surnamed Wu from Central China's Hunan province. Wu wanted to start a free-of-charge restaurant because of his own experience — after he graduated from college, he started to work in Guangzhou, capital of South China's Guangdong province. At the time, he only had an income of around 800 yuan (around $113.5) per month, and it was barely enough for him to stay fed. "I know what it feels like to be hungry," he said.

Wu once planned to open a chain of free bun shops, but due to the decline in his electronics business in recent years, he could not fulfill his goal. In fact, he has invested millions into the steamed bun shop over the past eight years.

The bun shop initially refused donations of all forms, but due to financial difficulties the eatery started to accept monetary donations from two years after opening. Announcements of donations' specific uses are made on a regular basis.

The shop manager, surnamed Chen, said: "With the support of warm-hearted people, we have undergone the good and the bad over the years. The cumulative number of donations we received from local residents has reached 630,000 yuan. I have faith we can overcome whatever difficulties lie in future."

The head of the Civilization Office of the Shishi Municipal Party Committee said by warming the stomachs and hearts of the vulnerable, Eternal Sunshine Steamed Bun Shop has become a symbol of Shishi's civil culture.

A sanitation worker surnamed Yang often eats at the bun shop. "Although I am dirty and tired after work," he said, "whenever I go there, I feel good because I know I live in a city full of love and warmth."