BEIJING, Nov. 10 (Xinhua) -- A signed article by Chinese President Xi Jinping titled "Let Wisdom of Ancient Civilizations Shine Through the Future" was published Sunday on Greek newspaper Kathimerini (The Daily) ahead of his state visit to the European country. 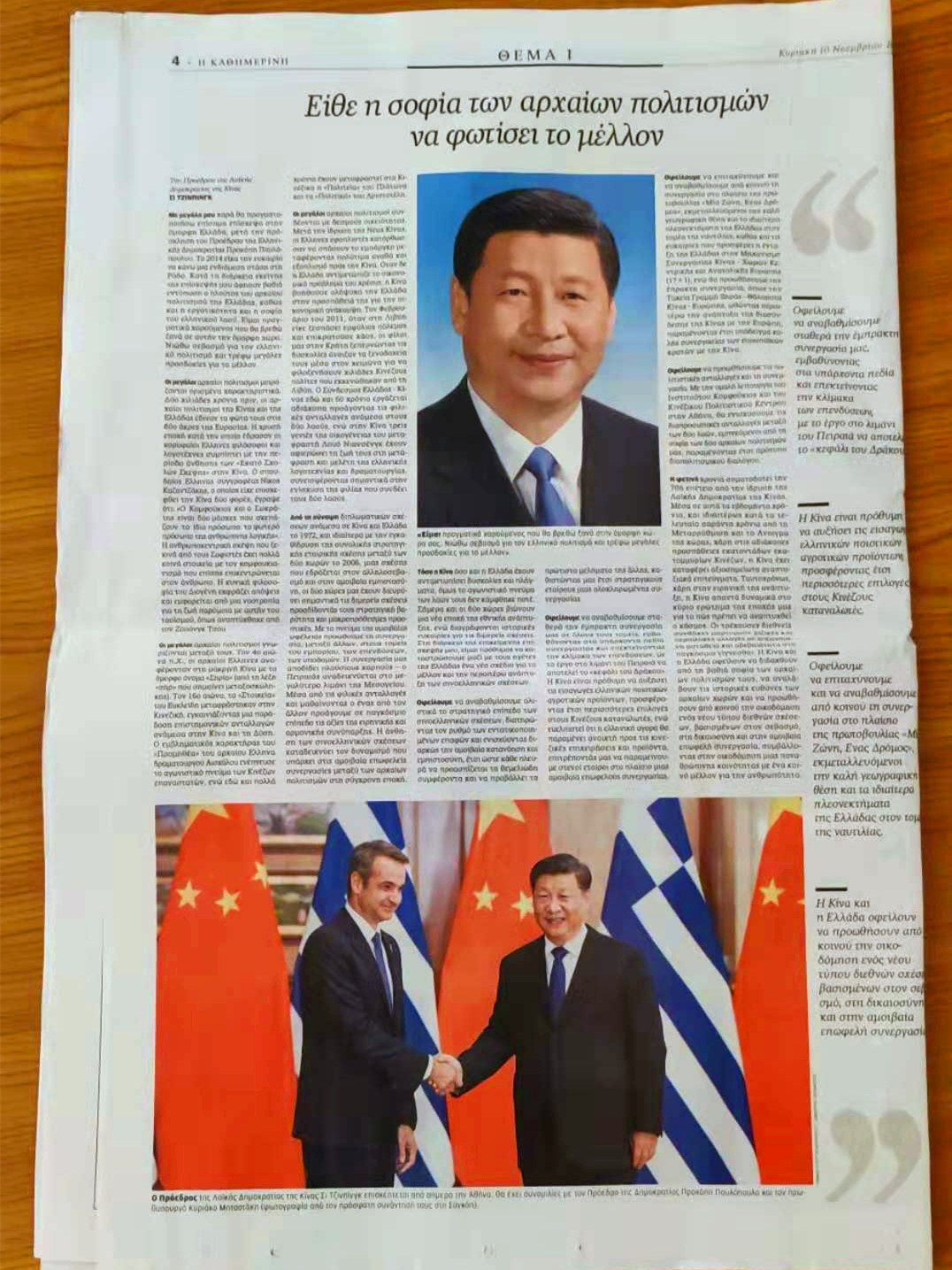 An English version of the full text of the article is as follows:

Let Wisdom of Ancient Civilizations Shine Through the Future

It is my great pleasure to pay a state visit to the beautiful country of Greece at the invitation of President Prokopis Pavlopoulos. In 2014, I made a stopover on Rhodes, and was deeply impressed by the ancient and rich Greek civilization and the hard-working and talented Greek people. It is with great respect for civilizations and high expectations for a bright future that I will once again visit this beautiful country, something I very much look forward to.

Great civilizations have much in common to offer each other. More than 2,000 years ago, ancient Chinese and Greek civilizations shone brightly in Asia and Europe. Greek's golden era produced many of its great philosophers and literary giants. That coincided with a period in China when "a hundred schools of thought contended with each other" and flourished together. Nikos Kazantzakis, a giant of modern Greek literature who had visited China twice, commented that "Confucius and Socrates were two masks that covered the same face of human logic." Humanism, which traces its origin to the Sophists of ancient Greece, resonates with the Confucian teaching that "people are the roots of a country." One can also find much similarity between the lifestyle and philosophy of Diogenes and Zhuangzi, a leading Daoist philosopher who lived around the 4th century BC in China.

Great civilizations understand each other better. As early as the 4th century BC, China was known to the Greeks by a beautiful name: Sērikḗ. In the 16th century, Euclid's Elements was introduced into China, paving the way for scientific exchanges between China and the West. The story of Prometheus narrated by Aeschylus was an inspiration to many Chinese revolutionaries. The Republic by Plato and Politics by Aristotle are also among those Greek classics that have long made names for themselves in China.

Great civilizations always stand by each other. After the founding of the People's Republic of China in 1949, Greek shipowners were among the first to break through the blockade and send much-needed supplies and equipment to New China. When Greece was plagued by economic and debt woes a decade ago, China provided wholehearted assistance to help our Greek friends emerge from the hard time. When conflict and war raged in Libya in February 2011, hoteliers on Crete, though in winter recess, provided accommodation to thousands of Chinese citizens evacuated from Libya. For over sixty years, year in and year out, the Greece-China Association has been committed to advancing the friendly exchanges between our two nations. The late Prof. Luo Niansheng, a renowned Chinese scholar and translator, is remembered for his life long dedication to the translation and research of Greek literature and for his important contribution to furthering our friendship, a legacy carried on by his son and granddaughter.

Since we entered into diplomatic ties in 1972 and particularly since we established a comprehensive strategic partnership in 2006, China and Greece have always treated each other with respect and trust, and developed our relationship from a strategic, long-term perspective. We have pursued mutually beneficial cooperation, achieved fruitful outcomes in trade, investment and infrastructure cooperation, and worked together to turn Piraeus into the largest port in the Mediterranean. We have learned from each other through cultural exchanges and shown to the world the harmony of two great and celebrated civilizations. The growth of China-Greece relations is testimony that ancient civilizations are capable of dynamic, mutually beneficial cooperation in modern times.

China and Greece have both been through trials and tribulations in history. This nurtures in our people a great resilience and a determination to strive forward. Today, China and Greece have both reached a new stage of development, which presents a golden opportunity for expanding our ties. During my visit, I hope to work with your leaders to map out a brighter future for our relations.

We need to raise the strategic level of China-Greece relations in all respects, maintain the strong momentum of engagement, continually enhance mutual understanding and trust, and render further support for each other's core interests and major concerns. This will make us strategic partners engaged in all-round cooperation.

We need to improve all areas of our practical cooperation with concrete efforts, broaden cooperation areas and upscale our investment ties with the Port of Piraeus as a flagship project. China is ready to import more quality agricultural products from Greece to provide our consumers with more choices. We hope Greece will open its market wider to Chinese companies and products. This will make our partnership one of mutual benefit.

We need to step up Belt and Road cooperation with down-to-earth efforts, make the most of the location and shipping capacity of Greece, seize the opportunities brought by Greece's joining the China-CEEC cooperation, actively advance practical projects under the China-Europe Land-Sea Express Line, and contribute to the China-EU Connectivity Platform. This will make us front-runners in China-Europe cooperation.

We need to strengthen our cultural exchanges and cooperation, ensure the continued success of the Confucius Institute and China Cultural Center in Athens, and expand people-to-people exchanges to draw further strength from our time-honored civilizations. This will make us a model of dialogue between civilizations.

This year we celebrated the 70th anniversary of the founding of the People's Republic of China. For 70 years, particularly since the start of reform and opening-up over four decades ago, the over one billion Chinese people have worked hard and made phenomenal progress. Through its own peaceful development, China is trying to answer the great question of our time: What should the future of our world look like? The international landscape is undergoing profound and complex transformation amid growing uncertainty and instability. China and Greece, each with a strong sense of history and responsibility, can tap our civilizations for wisdom and build a new type of international relations featuring mutual respect, equity, justice and mutually beneficial cooperation. Together, we can usher in a community with a shared future for all mankind.