CHINA Full-time dad? Why not?

Full-time dad? Why not? 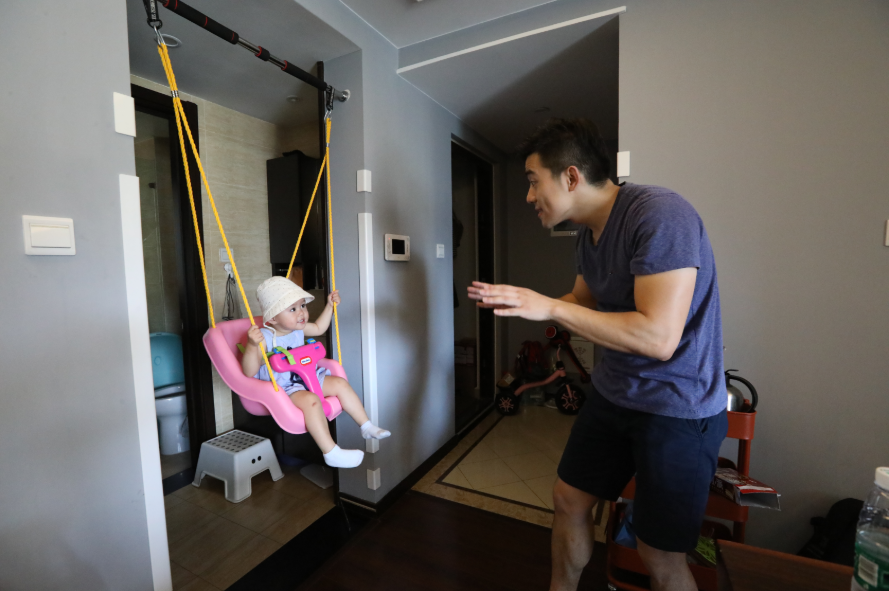 Zhao Fan knows how to do everything when it comes to taking care of his daughters. From diaper changes to bathing and food preparation, he can handle it all with ease.

"I knew nothing about it in the beginning. But gradually, I found that I'm gifted at it. Why do I say that? A proof is that they laugh a lot when with me, and every time they cry, they calm down soon in my arms," Zhao told CGTN.

The 30-year-old father used to work at a company in Chengdu, capital of southwest China's Sichuan Province and was well paid. But he quit his job during his wife's first pregnancy and later chose to become a stay-at-home dad.

"I think the time between the ages of zero and three is crucial for children's growth, and it's a very short period. I also hope I can become a better person through taking care of my children," said Zhao, stressing that the happiness and sense of achievement from it is something he can't get from a job or other experiences.

Zhao's choice is not entirely consistent with mainstream values. In China today, most couples rely on their parents or babysitters to look after their children. If one of the spouses has to sacrifice their career, it's always the wife.

Zhao's wife, Wang Meiling, says she is grateful for her husband's devotion.

"If not for my husband, I think I might have suffered from depression. What he does makes so much difference for our kids, for me, for the whole atmosphere of the family," Wang said.

She said when Zhao decided to become a stay-at-home dad, she didn't doubt whether he could handle it or worry if he would still be able to provide for the family.

"My only concern was if he would be unhappy or get disappointed after seeing his former colleagues get promoted or something else," said Wang.

Wang now runs a clothing business on online platforms. She also plans to learn fashion design from professionals, something she has long been interested in; Zhao supports her completely.

The couple says their relationship is built on mutual understanding and support.

"From pregnancy to delivery, only a mother knows what the experience is like. For me, what I can do is try to create a relaxing and warm family atmosphere with my love and respect," said Zhao.

Zhao acknowledged that taking care of his 22-month and seven-month-old daughters is a big challenge and that he often feels exhausted.

"Sometimes, when all my efforts to coax them go in vain, I would think if this decision is right or not. But such doubts always soon disappear," said Zhao.

The Zhao family dynamics is not an isolated case. Today, more and more men in China are opting to become househusbands to support their wives to pursue their career. But the phenomenon has also stirred up debates, with many arguing that it's shameful for a man to live off his wife or even his parents.

Both Zhao and Wang said they just want to choose a pattern that suits them best, and they will explore some new modes as their children grow up.

"We can't expect our husbands [to be] an economic pillar of the family and a wholehearted household helper at the same time," Wang said.

Zhao said he still feels some pressure in terms of the livelihood of his family, but he is confident about the future. He said it's never too late to start a new undertaking, and what he is dedicated to at the moment is worthwhile.