Stay-at-home mother Chen Ying recently approached a publishing house to discuss an album of the hundreds of pen-and-ink drawings she had made of her husband and son as the boy was growing up. 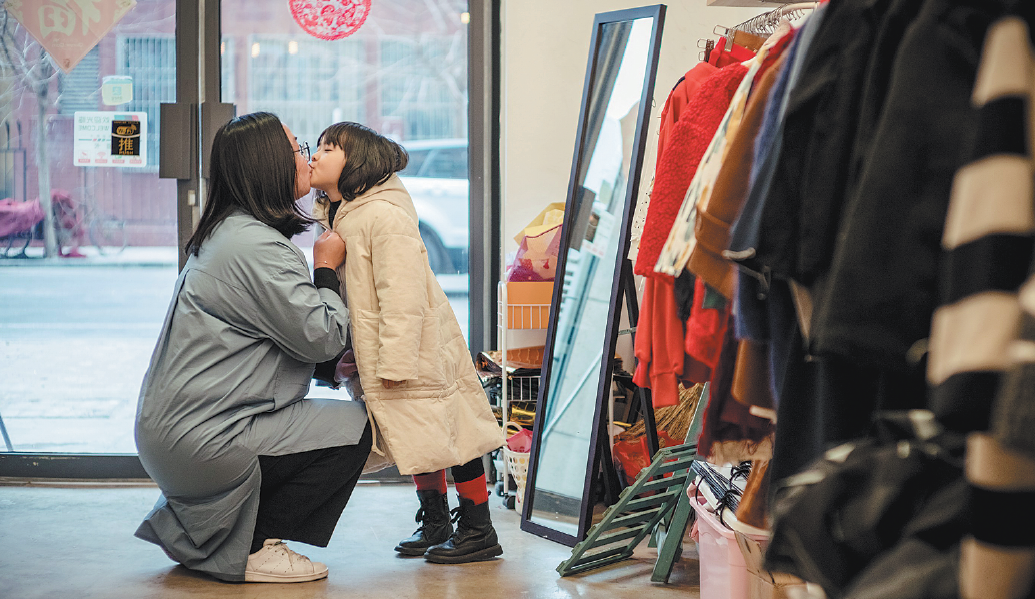 Chen, whose son is now 18, said she was inspired by friends, who often told her they were touched by the heartwarming scenes she captured from daily family life.

"Life as a fulltime mother gave me the inspiration for drawing, as I could spend more time with my son," Chen said.

She was a stay-at-home mom in Beijing for seven years and previously a project manager for a multinational company in the electronic communications industry in Beijing and in Chicago in the United States.

Such mothers have become more common in Chinese cities, especially since the universal two-child policy was started in 2016.

However, many of these women, who are well-educated and have performed exceptionally in their careers, are still eager to fulfill their talent and potential, in addition to caring for their families.

"Full-time mothers in China have reached the stage where they are exploring new values through various means, and not necessarily returning to their original career paths," said Tao Tai, a parttime columnist who has focused on this group for many years.

Tao, the author of a play about fulltime mothers that debuted in Shanghai last month, said many of these women are looking for new ways to improve themselves, to continue learning and be actively involved in society. Some are pursuing professional qualifications, while others are teaching yoga and donating their earnings to autistic children's charities.

Tao's play features four stay-at-home mothers talking about their insecure financial situations, a lack of communication with other adults, and concerns about the difficulty of returning to work after their children grow up.

Marriage experts said that they had noticed a rise in the number of stay-at-home mothers in cities.

But they said this was still a "luxury" for this relatively small group for various reasons, such as whether the husband's income can meet the entire household expenditure, or if the couple can progress on their career paths at the same time and respect the advances each of them has made.

Chen said her life as a stay-at-home mother is even busier than when she was in fulltime employment.

In addition to daily chores, she has never missed one of her son's fencing classes, violin and viola lessons and performances, or summer camps. She has been an art enthusiast since childhood, and all these activities provided her with material for her drawings.

Despite being a fulltime mother, Chen still found time to take classes at the Central Academy of Fine Arts in Beijing for two years, paint a book cover, and translate a book about the history of contemporary Western art from English to Chinese, together with two friends.

She was also heavily involved in her son's school activities, such as introducing Chinese paintings from old dynasties and the history of Western art.

In the late 1980s, Chen, an elite student, majored in physics at the University of Science and Technology of China in Hefei, Anhui province, and worked in the US with her husband for many years before settling in Beijing in 2011.

She said she was initially confused about her identity after becoming a stay-at-home mother, as she once went to a bank to apply for a new card, but when she filled in the form and wrote that her occupation was "housewife", the clerk changed this to "unemployed".

"Now, I describe myself as an art consultant," she said.

Another stay-at-home mother in Beijing, who wanted to be identified only as Yu, said she has tried to become involved in different social roles in recent years, including working as a volunteer at a museum in Beijing and as an assistant at a Finnish language school in the capital.

Both she and her husband worked in Finland for a number of years.

Yu, who gave birth to her second child nine years ago, said such roles had enabled her to stay in touch with her surroundings and to avoid the fear experienced by most stay-at-home mothers of being excluded from society.

Chen Yiyun, a marriage researcher at the Chinese Academy of Social Sciences, suggested that before they wed, couples should discuss whether the wife will become a stay-at-home mother, and that such a decision must be made on the basis of adequate mutual trust and support.

Mothers said the husband's attitude plays a key role in whether the wife can be truly happy with her new role at home.

Zhang Song, whose wife has been a stay-at-home mother in Shanghai for six years since the birth of their son, said that it was a joint decision for her to give up her job at a bank to be with their son as much as possible.

"I fully appreciate her diligence and dedication to our home," said Zhang, 37, an accountant. "I don't want her to feel insecure because she no longer has an income. It took me three years to prepare to start my business, during which time she footed the bills. That's how a family works," he said.

Chen Yiyun said the main concern of stay-at-home mothers is the difficulty in resuming their careers, and called for more legal protection for them.

"In some Western countries, such as Denmark and Sweden, there are laws guaranteeing that new mothers can return to their jobs within a certain number of years after taking a break to care for their babies. When seeking new jobs, they are also given priority among applicants with similar qualifications.

"That's how a society recognizes the social value of such mothers, who dedicate themselves to raising the next generation," she said.

Tao, the playwright, who was a stay-at-home mother to two children for six years, said she recently talked to three such mothers in the US, and each appeared very confident and positive.

"They all told me that their family and friends, especially their mothers who were full-time mothers themselves, favored their decision. This is rare in China," Tao said.

She hopes that one-day stay-at-home mothers in China, like their counterparts in the US, will win widespread respect from society.

Tao, who graduated from Fudan University in Shanghai with a major in journalism, returned to work as a copy editor in April.

"Stay-at-home mothers either won't have a pension or just a low pension if they stop working. This is also a source of their sense of insecurity," she said.