Fund to encourage couples to have two babies widely criticized 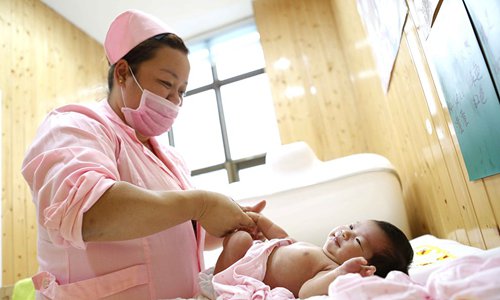 Chinese media and academics lashed out over a recent newspaper article proposing salary deductions for all workers under 40 that would be used to subsidize families with two children in a bid to encourage more births, saying it is "improper and unreasonable." China Central Television on Friday was harshly critical of the proposal put forward by two professors. The CCTV  opinion piece said establishing a fertility fund is unreasonable, goes against common sense and exposes the researchers' lack of professionalism. The professors made their proposal in an article in the Jiangxi Province-based Xinhua Daily on Tuesday saying the country should immediately remove birth limits as a short-term response to a declining birthrate. The professors propose establishing a fertility fund that would be paid for by citizens under the age of 40 who would have a deduction made from their monthly salary until they have two children. Once they have their second child they could withdraw from the fund and receive an additional subsidy from the government. Yi Fuxian, a research fellow at the University of Wisconsin-Madison, told the Global Times that the suggestion will only serve to "lower people's willingness to have more children," suggesting people will do the opposite of what they are being pushed to do.   "The nation should create a fertility-friendly environment for couples to have the willingness to have more children, such as offering child benefits and boosting public services," said Peng Xizhe, dean of the School of Social Development and Public Policy at Shanghai's Fudan University,In a bid to encourage more couples to have more children, many local governments have instituted new policies. Ethnic minority farmers and herders in the Garze Tibetan Autonomous Prefecture in Southwest China's Sichuan Province are now allowed to seek approval to have a third child. If the couple or one of them is a farmer or herder they can have a third child. The qualified couple can also have 30 more days of maternity leave and 10 more days of paternity leave, the local policy reads, according to news site thepaper.cn. Governments in Central China's Hubei Province and Northwest China's Xinjiang Uyghur Autonomous Region promised to reduce education fees and increase housing purchase subsidies, Economic Information Daily reported. The cost of raising a family is one of the key factors impacting a couple's decision to have children and the country should establish a support system which would provide free education, free medical care and even a basic cost of living, Xiong Bingqi, deputy director of the 21st Century Education Research Institute, told the Global Times on Friday. Xiong says asking a single-child family to contribute to a fertility fund is actually imposing a fine on couples who don't want a second child. Such a fertility fund, Yi also noted, would be a dramatic shift from "forcing people to have fewer children" to "forcing people to have more children."However, Hu Jiye, a professor at China University of Political Science and Law, supported the notion of establishing a fertility fund, but he argued that the fund should be financially supported by the nation, rather than a deduction from citizens' paychecks.