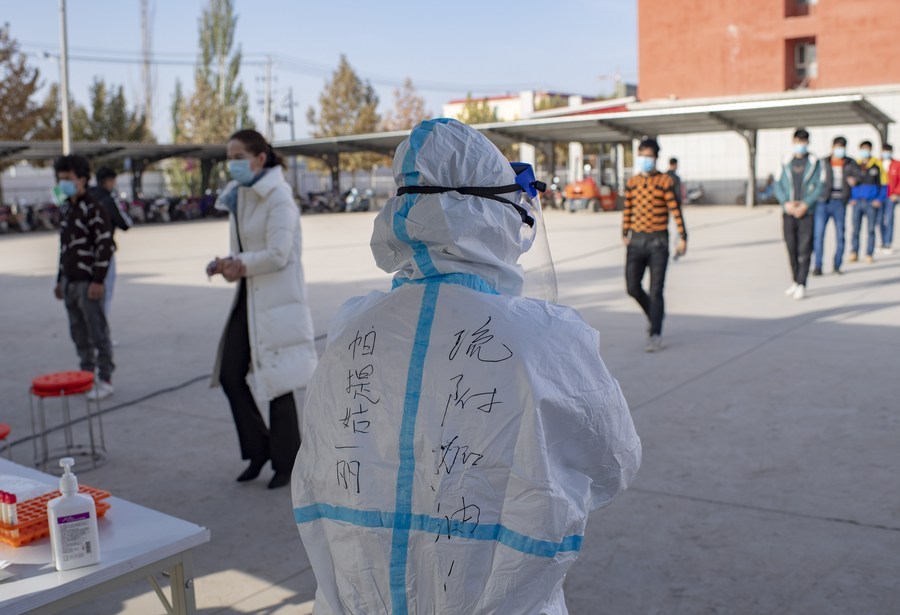 A medical worker stands by as people line up to have their samples collected for nucleic acid testing in Shufu county of Kashgar prefecture, Northwest China's Xinjiang Uygur autonomous region, Oct 26, 2020. [(Photo: Xinhua)

It is unlikely that the new COVID-19 outbreak in Kashgar prefecture of the Xinjiang Uygur autonomous region will spread further, a local health official said on Wednesday.

All the confirmed cases were from the group of asymptomatic patients reported since Saturday, as they have begun to show symptoms, Wang said at a news conference. Asymptomatic cases are placed in a different category from confirmed cases, in which symptoms are present.

All the patients were reported in Shufu county of Kashgar prefecture and, as of Tuesday, there were a total of 22 confirmed patients and 161 asymptomatic patients, he said.

Apart from these cases, all the remaining 4.74 million people in Kashgar tested negative, he added.

Gu Yingsu, deputy director of Xinjiang's health commission, said all of the asymptomatic patients had been quarantined for medical observation at a designated hospital and all of the confirmed cases have received timely treatment at the hospital.

The National Health Commission and Xinjiang's health commission have sent medical experts to the hospital, she said.

The designated hospital is also equipped with enough medical devices and epidemic prevention and control materials to handle the outbreak, she said.

Asat Ulayim, a Kashgar government official, said the new outbreak is closely related to a garment factory that employs 252 people in Zhanmin township of Shufu.