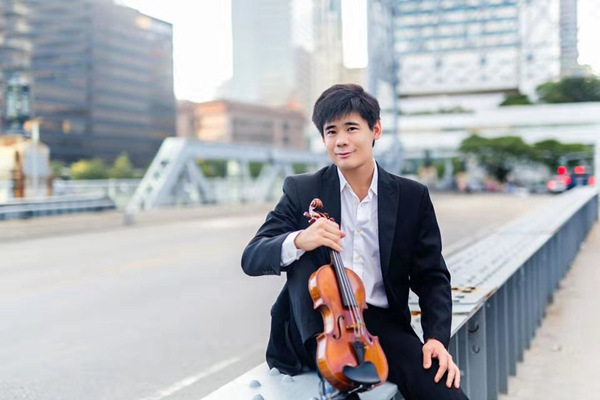 The 30-year-old artist is also one of 10 recipients of the 2019 Lincoln Center Awards for Emerging Artists -- the annual prizes that honor outstanding artistry and serve to acknowledge the promising future of selected performers within the 11 resident organizations of the Lincoln Center.

What is interesting is that Yu would not have been a violin virtuoso had his parents been generous enough to allow him to study the "expensive" piano when he showed signs of musical precocity as a child.

Yu started to learn the violin at the age of four and a half. Yet it was a choice by coincidence. His teacher had suggested that Yu study the piano since he's got extremely sharp ears and big hands.

"My parents looked at the piano and said 'Wow, that's a huge box. It must be very expensive!' Then they saw a little box that happens to be a violin case. And they said, 'Okay, maybe we should learn that. That's probably a little cheaper,'" recalled Yu in a recent interview with Xinhua in New York City.

"It turned out to be the biggest 'mistake' in their life because violin can be the most expensive instruments in the world. For example, a Stradivarius or del Gesu violin can worth millions of dollars." said Yu, who performs on a 1729 Stradivarius violin on loan from an anonymous donor.

"So it's really, really a coincidence. But I am happy about it because later on I figured out that violin is the closest instrument to human voice, and I can express all my feelings with it. It's almost like an extension of my body whenever I play the violin. So I'm glad I made that decision," said Yu, also First Prize winner of the prestigious 2010 Yehudi Menuhin International Competition for Young Violinists.

Born in north China's Inner Mongolia Autonomous Region, Yu moved to Shanghai at the age of 11 and received early training from a renowned violinist at the Shanghai Conservatory of Music. He earned a bachelor's degree and a master's degree, as well as a prestigious artist diploma at the New England Conservatory of Music in Boston, where he was a student of Donald Weilerstein, Miriam Fried, and Kim Kashkashian.

"Now I'm (almost) thirty years old. I spent my first decade in Inner Mongolia, second decade in Shanghai, and third decade in Boston. So it's been quite an interesting journey for me," said Yu, who now resides in Boston, Massachusetts.

An active recitalist and chamber musician, Yu has performed at many world-renowned concert venues and received consistent critical acclaim and enthusiastic audience response for his performances.

The young musician was candid about his everyday life which he said was not as glamorous as in the spotlight on stage.

"To be honest, it's very, very difficult to be a 'star'. We have to deal with a lot of pressure. No matter how you feel today, you have to give the audience your best," said Yu, who spends about half of each year traveling around the world.

"Sometimes I had very bad stomachache. Sometimes I didn't sleep for like forty, fifty or sixty hours, and I still have to play a full concert by memory. If I miss one note, the whole world knows in the next day's newspaper," he said. "But we have to smile and act as if we're totally in control and confident. And please just imagine not doing that for only once, but doing that a hundred times a year. That's a lot to take in."

Yet Yu said he was always ready to share the beauty of music with the audience.

"I was given such talent by my parents. If I don't share that talent with the world, I am not fulfilling my responsibility as a musician. So as tough as it sounds like, I'm happy to do what I'm doing right now."

Yu was all in tears when he talked about his mother who passed away eight years ago.

"The biggest challenge I had to deal with emotionally and physically was when my mother got cancer and I wasn't even sure if I could stay in this country anymore because I so much wanted to go back and support the family," he said. "But then I decided to stay because I know if I thrive as a musician, that's the biggest comfort for her."

Yu took a flight to New Zealand for a pre-scheduled competition the day his mother passed away.

"I didn't even cry because I had no power to even do that. So I decided to cry with my violin," he said. "I got to the final and I couldn't feel my hands because physically I was so tired. I also had injuries. I took four pills of painkillers just to relieve the pain in my hands ... I felt her spirit was there with me, so that I was able to magically keep playing till the end."

"I made it and I sort of decided to use the music to mourn her. That was one of the toughest memories. But I would say that's also one of the most precious memories in my musical career. That makes me a stronger man, a much more mature musician," he said.

"Eight years passed since she passed away. But every time I perform on the stage, I still imagine she's there listening to me."

Yu attributed his success to his early violin training in China, further study in the United States as well as his deep exposure to both Chinese and Western culture.

"The violin teaching system in the U.S., for example, is very different from what I received in China," he said.

In China, people put more emphasis on the method and the technique while in America, it is more about the bigger picture and how to approach certain musical ideas, he said.

"Both are great. I think in order to become a great musician, you should have a very strong foundation technically, but you should also have this inner voice to help you to become a mature musician," he said.

Though the language of music is universal, it is very helpful for musicians playing a certain piece of music to better understand the culture and history where the music is from, Yu said.

"For example, Mozart was born in Austria and Bach was born in Germany. So we have to 'live' in Europe in order to really understand their language and their music," he said. "Just like if you ask an American to play (well-known Chinese) violin concerto Liang Zhu or Butterfly Lovers Concerto, most likely you will feel like something is missing. That's because the story has been in our blood for so long."

As to his future development, Yu said he hopes he would have more opportunities to share his music with more audience.

"I think that is very important. And really every day I remind myself where I come from and I'm really, really proud to be a Chinese," he said.

"Everybody has dreams. I have dreams, too. But luckily, I had almost fulfilled all my dreams of my childhood with all the efforts I was making on the daily basis," he said. "So I think it's important to focus on the next task. Always focus on how to prepare as well as possible for the next concert."