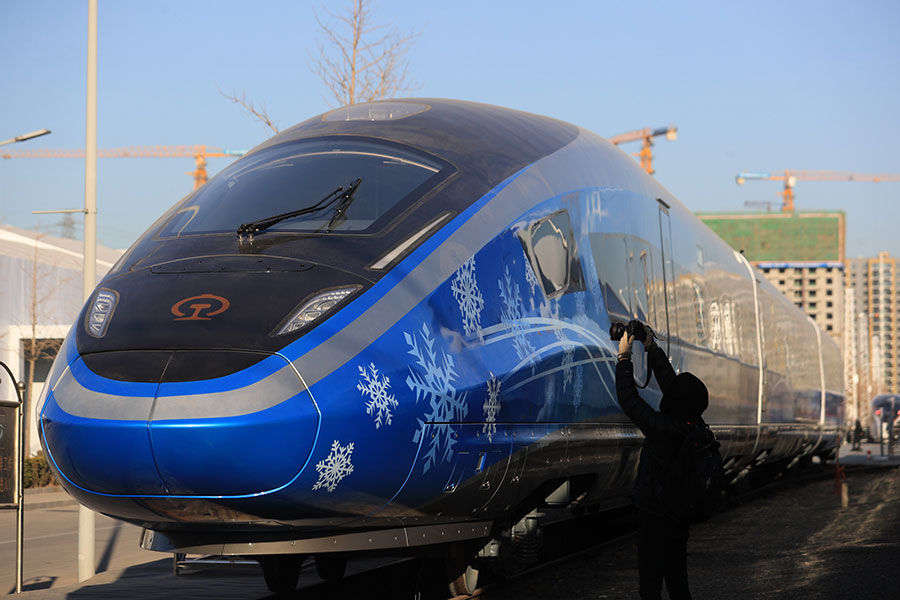 One of the newly developed Fuxing bullet trains is shown at an exhibition in Beijing on Monday. (Photo: China Daily)

The longer Fuxing trains, which are 440 meters long and can seat 1,283 passengers, are the longest high-speed trains in China, with a maximum speed of 350 kilometers per hour. Two other Fuxing trains are expected to run at maximum speeds of 250 km/h and 160 km/h.

Zhao Hongwei, chief engineer at the China Academy of Railway Sciences, said that unlike the earlier Hexie (Harmony) models, which were designed with the help of foreign-developed technology, Fuxing bullet trains use wholly self-developed core technologies and are built under a unified Chinese standard.

"For over a decade, China learned from developed countries to build a world-class high-speed railway system. Now it holds complete intellectual property rights. The domestically developed trains show that China, despite getting a late start on the high-speed track, is cementing its leading role in the race," Zhao said.

Though it was a latecomer, China now has the world's largest high-speed rail network－29,000 km as of the end of 2018, about two-thirds of the world's total.

Sun Zhang, a professor at Tongji University in Shanghai, said that made-in-China trains and technologies have already made their way to over 100 countries, including Turkey, Indonesia, Russia, Iran and India. Apart from upgrading China's rail system, the latest models with different design speeds and costs can also offer more options for export.

"Lower emissions and shorter transportation times will contribute to a growing market for high-speed rail around the world, although the ability to construct such systems is possessed by only a few countries, which offers more opportunities for China's cutting-edge technology and devices to be exported," Sun said.

Two types of the trains－the longer Fuxing and 160 km/h Fuxing－will be used starting on Jan 5 to provide a better travel experience and help ease pressure during the upcoming 40-day Spring Festival travel rush, when over 413 million trips are expected by rail.

"With people's growing desire to travel, high-speed trains are becoming one of the major transportation choices of the Chinese people and expats in China. The design of the trains aims at offering more options to the public and further improving their travel experience," said Zhang Bo, a researcher at the Locomotive and Car Research Institute of the China Academy of Railway Sciences.

With more spacious seats, more power outlets, USB ports, more ample legroom and other passenger-friendly services, all trains in the Fuxing series are more comfortable than older and slower trains, Zhang said, adding that the 160 km/h Fuxing train will gradually replace older trains in some regions.