A longer Fuxing bullet train made its debut on Saturday whose 17 cars make room for 90 additional passengers. 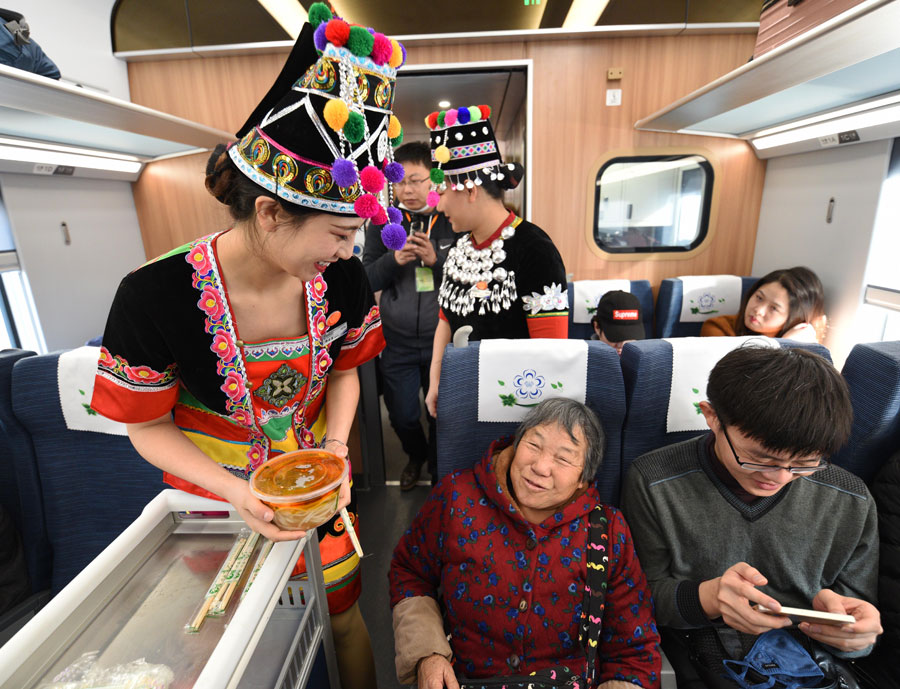 While the Fuxing high-speed bullet train makes its first trip in Yunnan province on Saturday, train attendants are clad in the province's traditional clothing as they serve passengers. (Photo: China Daily)

The train, which carries a maximum of 1,283 passengers, travels on the Beijing and Shanghai high-speed rail line at a top speed of 350 kilometers per hour. It has 22 business class seats, 148 first-class seats and 1,113 second-class seats.

The first of these longer Fuxing trains left Beijing on Saturday at noon and arrived in Shanghai Hongqiao Railway Station at 4:36 pm.

The Fuxing, or Rejuvenation, is China's self-developed bullet train. Before the launch of the 17 carriage-train, the longest Fuxing had 16 carriages.

Miao Zheng, the driver of the first 17-carriage Fuxing, said the train added an extra carriage between the 15th and 16th carriage, expanding the total length of the train from 414 meters to about 440 meters, according to Beijing News.

As the high-speed rail network expands, the bullet train has become one of the Chinese people's favorite means of travel.

The company estimated some 413.3 million trips will be made between Jan 21 and March 1, the 40-day Spring Festival travel rush, a year-on-year increase of 8.3 percent. Some 10.33 million trips are expected to be made each day, setting a new record. Spring Festival is China's most important holiday and also the most challenging time for transportation departments.

Tickets can be brought 30 days in advance via the internet and by phone.

The company plans to put 3,200 km of new high-speed rail track into operation this year, putting it one year ahead of its schedule for having a 30,000-km high-speed rail network.