CHINA Garbage sorting is a long journey, but it has to start somewhere

Garbage sorting is a long journey, but it has to start somewhere 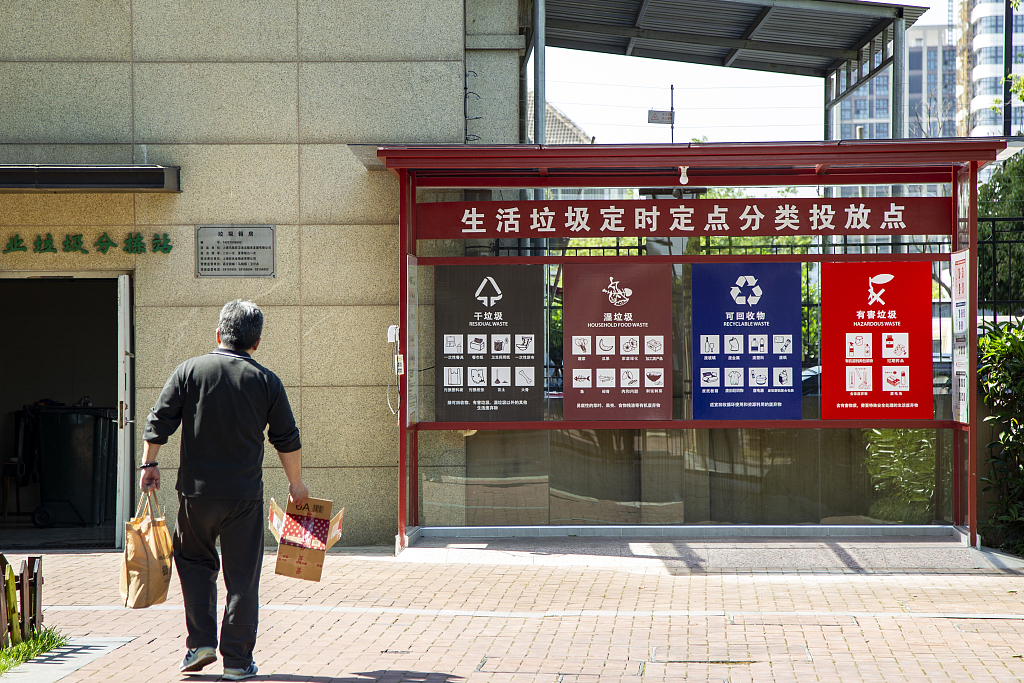 "What type of waste are you?"

It’s a greeting that’s very likely to happen between two friends in China today. Annoying as it sounds, it’s not intended to start a fight.

A new garbage sorting regulation went into effect on July 1 in Shanghai, and the mandatory rule classifies waste into four kinds: dry, wet, hazardous and recyclable. Failing to comply with the sorting rule can lead to a fine of 200 yuan per individual and up to 50, 000 yuan per organization or company.

By July 8, 188 rectification notices have been issued. The regulation marks an era in which garbage sorting practices have become stricter than ever.

Shanghai produced a total of nearly 9 million tons of household waste in 2017, four times than it was 40 years ago, according to China’s Ministry of Ecological Environment. However, the city’s waste recycling rate is less than 10 percent.

Most waste is disposed of by either burning or burying. Unfortunately, it now takes less time for new landfills to reach capacity and the difficulty of deciding on new landfill locations is mounting because of local opposition.

Water contamination, air pollution, spread of disease -- the list of environmental problems due to dumping waste improperly is endless. Humans are not the only victim. A pregnant sperm whale was found dead on a beach in Italy with 22 kilograms (49 pounds) of plastic in its stomach, according to a news article by CNN in April. A robust economic growth should not be achieved at the cost of environmental destruction.

In fact, this regulation has appeared in the headlines even weeks before it was passed. Previous attempts at sorting garbage by local authorities and volunteer groups have not met with much success. The public has debated the effectiveness of this new rule. The sorting standard has confused many people, with some calling it counter-intuitive. For instance, no matter the state of a tissue, it is still considered dry waste.

To raise awareness, distributing instructional brochures has been helpful. But smarter solutions are in vogue.

You can also access hands-on information from apps with detailed sorting guidelines or practice through VR garbage-sorting games. Social media has served as another powerful tool to encourage progressiveness: the tag #garbagesortingchallenge on Weibo has generated 900 million views by July 9.

A group of six high school students from Shanghai claimed the first prize in an innovation contest with their design of a spinning garbage can that separates four types of waste. Smart garbage sorting systems that monitor garbage sorting in real time have been put into use in some neighborhoods. By recycling certain wastes at those facilities, residents can even earn points and redeem them into cash.

Businesses are advocating for a greener economy.

Crona, a beer company, recently called for its customers to cut the lemon slice into 16 portions, because lemons and the glass create two separate wastes, customers can save on the hassle without losing the original flavor.

On Taobao, a Chinese online shopping site, garbage sorting products began attracting the attention of Chinese buyers. One online store has sold more than 25, 000 garbage cans that can separate wet waste from dry waste in June. Garbage pick-up and sorting services are also available online. The service charges between 180 to 420 yuan each month and has so far accepted more than 100 orders.

The authorities are acting to rebuild residents’ trust. In Shanghai, trash trucks were painted different colors to dispose of one particular kind of waste. Thus, residents could easily tell whether the authorities disposed of their sorted waste properly. The rule requires residents to throw away waste at a fixed time and place, though hours are extended for people who get off work late.

Following Shanghai, 45 other cities were selected to build up a household waste processing system, according to China’s Ministry of Housing and Urban-Rural Development. The ultimate goal of garbage sorting is to build up a sustainable future for the generations to come.

Garbage sorting is a long journey, but it has to start somewhere. You don’t have to wait until the rule becomes enforced in your own community. Even a small change in your consumption behavior today will make a difference-next time when ordering deliveries, don’t ask for single-use spoons or chopsticks.