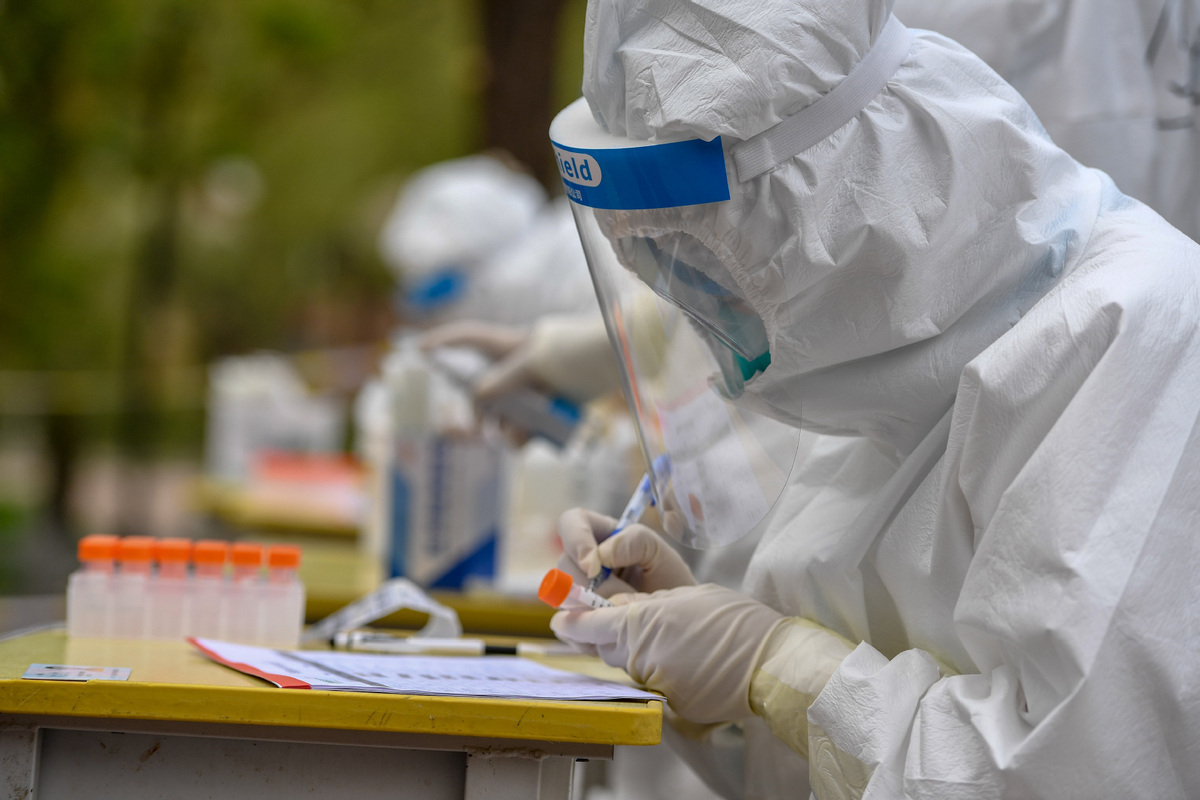 Nucleic acid test samples are labelled by a health worker in Shulan, Jilin province, on May 15, 2020. (Photo: Xinhua)

A 45-year-old salesman surnamed Lin, who was feared to have been behind a potential superspreading event in Jilin province, was confirmed as having COVID-19 on Saturday, according to the provincial health commission.

As of 2 pm on Sunday, the province had reported 34 confirmed cases and 80 asymptomatic carriers, after the first four infections were detected on Jan 10, officials said at a news conference on Sunday.

"Among the 114 patients, 102 were in some way connected to Lin," said Zhang Yan, deputy director of the commission. On Jan 12, Lin was traced as a close contact of an infected person and then tested positive. But before that, he had traveled to several areas in Jilin and carried out a series of marketing promotional activities about healthcare courses.

Lin arrived in Jilin from Heilongjiang province on Jan 7 and then held four courses in different healthcare clubs in the cities of Gongzhuling and Tonghua.

The courses caused an infection cluster involving 79 seniors and 23 close contacts with an average age of 63, said Zhang, adding that the oldest one is 87.

"A high proportion of infected patients don't transmit the virus or cause second-generation cases," said Feng Zijian, deputy director of the Chinese Center for Disease Control and Prevention. "However, a small number of infected people may transmit the virus to more than three others, which can be identified as superspreading, a very important feature of COVID-19."

Avoiding unnecessary gatherings is an important way of preventing superspreading, he added.

Of the confirmed cases, 11 were in Wangkui county in Suihua, where the first asymptomatic carrier of the recent outbreak was reported on Jan 10.

However, Hebei province saw on Saturday its first single day decline of COVID-19 cases in the past five days.

To stop the risk from gatherings, the province's top security and legal agencies released a notice on Saturday barring people during the epidemic control period from holding any gatherings, including weddings, funerals and New Year celebration galas.

If infection clusters are caused by gatherings, those who organized them will bear criminal responsibility, the notice said.

A second round of citywide nucleic acid testing last week in Shijiazhuang detected 247 positive results, spread over eight counties and districts, according to a news conference during the weekend. The overall numbers had fallen compared with the first round of tests, which yielded 354 positive cases in 13 locations, said Xu Jianpei, vice-governor of Hebei.

While Hebei is stepping up all-around efforts to control the pandemic, help and support from across the country have arrived.

A truck and a nucleic acid testing vehicle, donated by Wuhan Bus Manufacturing Co and MGI Tech Co in Hubei province, arrived at a tollgate in Shijiazhuang on Sunday afternoon and over 1,300 metric tons of food and necessities, including instant noodles, were sent to cities in Hebei from neighboring Tianjin over the weekend.