GDP of Shanghai's Pudong likely to have reached 1 trillion yuan 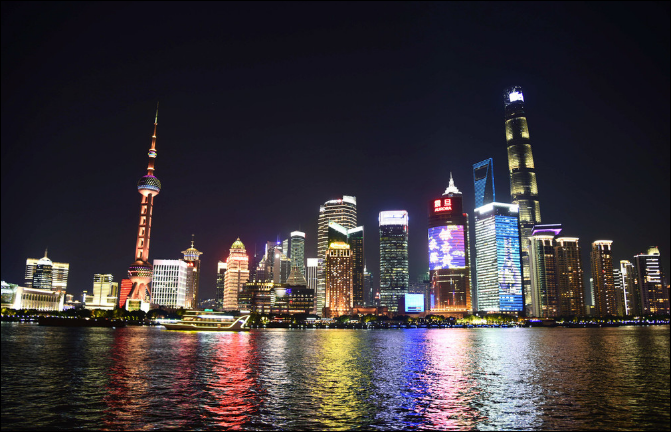 Shanghai's Pudong New Area, a shining symbol of China's modernization, is likely to have recorded a gross domestic product last year of over 1 trillion yuan ($145.4 billion) — the first time the GDP would have broken this key threshold.

The special district, which contributed roughly one-third of Shanghai's annual economic output in 2018, will likely break the annual GDP threshold, according to predictions from district officials made during a meeting on Saturday.

The area's total fixed-asset investment is set to hit 200 billion yuan in 2018, while overall fiscal revenue is forecast to reach 400 billion yuan.

Pudong is eyeing over 2 trillion yuan in foreign trade for 2018.

Pudong also put forward a goal to have its 2019 GDP growth rate at 7 percent or above, maintain the size of industrial output beyond 1 trillion yuan and synchronize the growth rate between people's disposable incomes and overall economic expansion, People's Daily cited a report circulated during the meeting as saying.

These projections indicate that decades of reform and opening-up have allowed Pudong and Shanghai to be successful examples of the market-driven economic model, said Shen Kaiyan, an economics professor at the Shanghai Academy of Social Sciences.

"Apart from its role as a critical industrial base, reform and opening-up successfully helped Shanghai unlock its potential in realms like logistics, port management, and export processing. This is a substantial step toward building up a globally competitive comprehensive value chain," Shen said.

The 1,210-square-kilometer Pudong — literally meaning "east of Huangpu River" — is Shanghai's growth engine. But it started out as ordinary farmland that was once looked down upon compared with the city's thriving Puxi industrial center, said He Jianming, vice-chairman of the China Writers Association and author of Pudong Epic.

That all changed in April 1990, when the State Council, China's Cabinet, announced plans to develop Pudong into a dynamic new area through institutional innovation, He said. Today, it is home to the skyscrapers that define the Shanghai skyline, wharves that handle countless containers, industrial clusters that boast high-tech and medical industries, as well as thousands of professionals from around the world.

The district accounts for around 20 percent of the city's land and 25 percent of its population, and entered into a new phase of development in 2013, becoming the nation's first free trade zone and helping Shanghai become an international center for finance, shipping, trade, and technological innovation.

The area was given a fresh boost last year when President Xi Jinping announced major decisions in November to enlarge the FTZ, conduct experiments in its capital markets and enhance coordination among the Yangtze River Delta region — moves interpreted by industry players as highly conducive to business expansion.

Pan Jianjun, the spokesman of Shanghai-based Bright Food (Group), said the company is encouraged by the government's decision to set up new areas in the Shanghai FTZ for "better outreach to overseas markets".