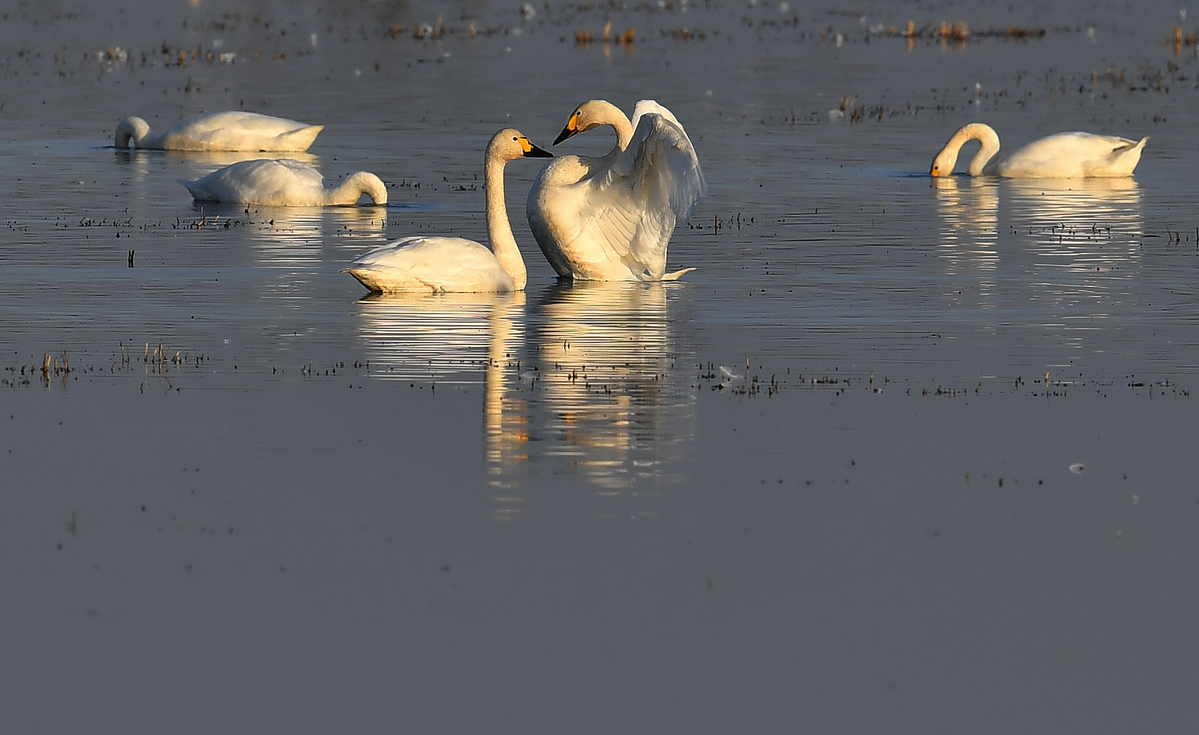 Swans rest in wetlands of the Dongting Lake, the second-largest freshwater lake in China. (Photos: Xinhua)

CHANGSHA -- He Dongshun is the third generation of fishermen living beside the Dongting Lake, the second-largest freshwater lake in China.

Born in 1997, his best childhood memories are sitting on the top of the boat with his father and looking at the vast lake as the boat set sails.

His father He Daming was born with a talent for fishing and was a popular fisherman by the lake when he was young.

Dongting Lake has been known for being a place of abundance since ancient times. Fishes reach here along the flow of the river to live and breed, giving local fishermen countless natural gifts.

He Dongshun used to go fishing with his parents when the weather was calm, and would not stop until the cabin started teeming with fish.

In the 1980s, there were more than 120 species of fish in the Lake. However, illegal sand mining coupled with massive vessels sailing and berthing in the area affected the lake ecosystem. As a result, fishery resources in the Lake continued to deplete. And to make things worse, illegal power grids began to emerge around the area.

It was around this time that his father noticed a significant decline in the number of finless porpoises that used to be ubiquitous in the lake.

"Finless porpoises are mammals that breathe through lungs," said He Daming. "If the porpoises survive the electric shock, they will suffer from shock and drown as they are unable to swim out to breathe."

He Daming felt sad when he noticed that the species was in a miserable state, but he was helpless.

In 2003, he saw an injured finless porpoise and its baby trapped in the reeds and made a decision to take care of them. Four months later, the porpoises recovered.

This experience prompted him to find a new way out. He gathered some of his fellow fishermen to discuss the situation and even urged them to refrain from fishing.

The ecology of Dongting Lake is on the verge of collapse. Fishermen who have been fishing for generations know that if they continue to fish without restrictions, they will eventually cause fishery resources to extinct.

Starting from 2020, with the ban on fishing in key areas of the Yangtze River basin, including Dongting Lake, hundreds of thousands of fishermen have gradually bid farewell to fishing and taken up jobs in other industries.

Meanwhile, He Daming's team of conservationists continued to grow, and several people who were previously engaged in fishing joined him.

However, not everything was hunky-dory as they encountered some new problems. The sustainable development of the protection of Dongting Lake needs fresh blood as the fishermen of his generation have relatively low education and are getting older.

He Dongshun, who went to Changsha for higher education, had just graduated at that time. He told his father that he would like to return to his hometown and carry forward the cause of environmental protection by working for Dongting Lake conservation.

He found a large number of abandoned nets in the lake, which were left behind by the fishermen last year. The birds are always at the risk of getting tangled up in them while foraging, making it difficult for them to survive in the wild.

He asked members of the association to search for fishing nets in the lake's nature reserve, and cut off or burn the nets when they were found.

They have continued to expand the realm of their conservation work. At present, their efforts include the protection of migratory birds and milu deer, the prevention and control of air pollution caused by ships, pollution supervision of coastal chemical plants, and creating awareness on the protection of Dongting Lake ecology.

Thanks to his unremitting efforts, a black stork guard station of the east Dongting Lake was established this year. There are only around 3,000 black storks, a rare wild species, across the world, and about 30 are spotted in the lake area every day.

"When I was a child, I thought the porpoise was fish. But, my father told me it isn't a fish, it's a porpoise," he said.

"I hope one day my child will see a porpoise and ask me if that's a fish, and I will tell my kid it is not a fish, it's a porpoise," he added.