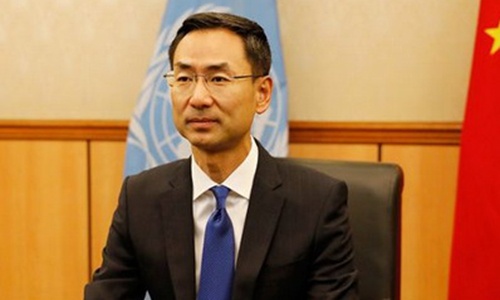 "From the bottom of my heart: good riddance, Ambassador Heusgen," said Geng.

At Tuesday's UN Security Council meeting, German envoy to the UN Christopher Heusgen urged China to free "the two Michaels" as a gesture for Christmas, which is unrelated to the official topic of the agenda, which was the Iran nuclear deal.

Rebutting Heusgen's accusation, Geng condemned his abuse of the UN to launch malicious attacks on other countries in order to "poison the working atmosphere."

Heusgen's statement is totally irrelevant to the subject of the meeting, and is completely at odds with the facts and totally contrary to the spirit of unity and cooperation, Geng noted. "His statement maliciously attacked other members, abused the Council's platform and poisoned the atmosphere in which the Council works."

Heusgen plans to retire at the end of this month, ending his career as a diplomat.

"Now I say a sincere good riddance, Ambassador Hussgen. I hope that the Council will be better able to discharge its responsibilities for the maintenance of international peace and security in 2021 without you," Geng said.

China is a country governed by the rule of law, Geng said. Anyone who violates Chinese law will be punished, and China's judicial organs handle cases within the legal process.

The two Canadians Michael Korvig and Michael Spavor were arrested in accordance with Chinese laws in 2018. The two are suspected to have threatened China's national security. Their legitimate rights have been safeguarded in the whole process, said the Chinese Foreign Ministry spokesperson earlier in December.