CHINA Giant panda may be mother again after insemination

Giant panda may be mother again after insemination 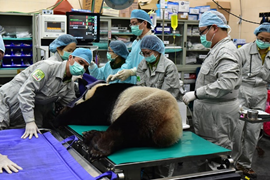 Both born in 2004, the pair were given as a goodwill gift to Taiwan by the Chinese mainland in 2008. They had their first and only cub so far, Yuan Zai, on July 6, 2013, also by artificial insemination.

The zoo has been attempting to assist the pair to conceive again since 2015.

Zoo staff speculated that the peak of Yuan Yuan's estrus came on Tuesday and let the pair stay in the same cage to try natural mating, but it failed as before.

Sperm was collected from Tuan Tuan, and artificial insemination was attempted on Tuesday afternoon.

Since Yuan Yuan's estrus had not come to an end, staff conducted a second artificial insemination on Wednesday morning.

Female pandas can only become pregnant once a year and normally have litters of one or two cubs.

Eve Wang, curator of the giant panda pavilion at Taipei Zoo, said Tuan Tuan and Yuan Yuan are still of childbearing age, although they have passed the optimum period for giving birth, which is from seven to 12 years old.

Yuan Zai, the female cub of Tuan Tuan and Yuan Yuan, is more than 4 years old, and close to sexual maturity.

"We hope to find a husband for Yuan Zai, or use frozen sperm from a suitable male. We need to have discussions on the issue with the mainland," Wang said.