XINING -- Four giant pandas can be seen playing at the Qinghai-Tibet Plateau Wild Zoo in Northwest China, as they are adapting well to their first winter on the plateau. 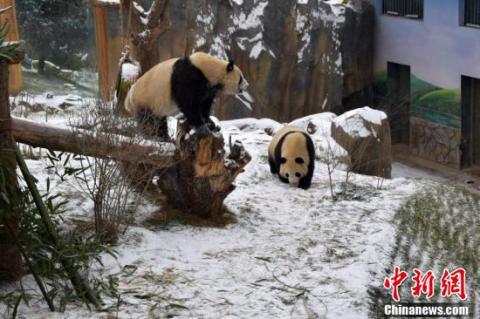 The rare species native to warm and humid Sichuan province in Southwest China became the first pandas to settle down in the plateau city of Xining, capital of Qinghai province, in June.

The panda house in the zoo is the largest of its kind in China. The zoo is open to visitors in winter.

Xining, with an altitude of over 2,260 meters above the sea level, has entered its coldest time of the year with the daily low temperature averaging minus 10 degrees Celsius.

However, the pandas do not just idle in their enclosures enjoying the luxuries of temperature control, floor heating and humidified air. During the day, they venture out rolling in the snow and digging for bamboo shoots buried in the snow by their keepers.

The keepers said the pandas have fully adapted to the climate on the plateau, and all their health indexes are normal.

Experts said the panda settlement on the plateau can help expand the species' adaptive range of living. Researchers will continue to follow their health conditions at high altitudes.