CHINA Glimpse through the back window: Ordinary Wuhan citizens captured by photographers

Glimpse through the back window: Ordinary Wuhan citizens captured by photographers 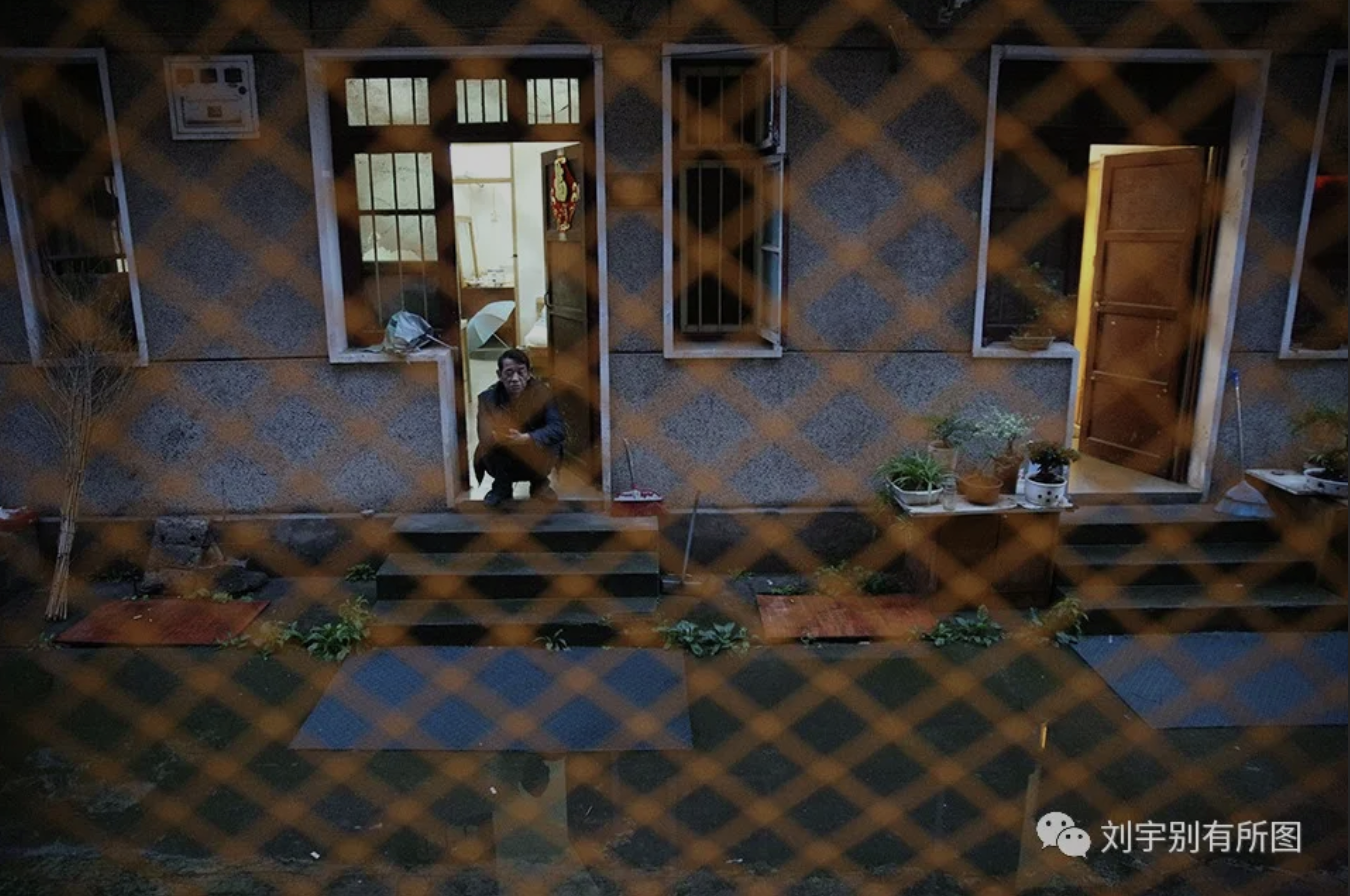 “I am just afraid that all this will be forgotten if we don’t have the scenes captured with our cameras.”

On February 20, Liu Yu and his fellow team members first set foot on the Shuishen dormitory in Wuchang district, where they were going to stay over their days in Wuhan. As members of China Photography Association. Their mission was mainly to give the public a direct visual sense of medical workers’ life amid the battle against the coronavirus. Yet, as sojourners in the city gripped first by the outbreak, they are literally moving around in the epicenter, living every second of their life there, and their cameras inevitably leave some space for its citizens, which looks more ordinary than particular.

As Liu recalls, he woke up to some soothing melodies on the second day, and that greatly eased his nervousness. Looking around out the window, he was greeted by the fresh faces of his new neighbors, whom he has got to know better and better over the past few weeks. Over time, conversations were struck, gifts exchanged, and new neighbors moved in. The belated livelihood of a much expected spring is finally being felt, which has stirred Liu’s natural passion for photography.

The first few pictures were taken through a grid.

“At first, I thought the grid might take a vibe off my photos, but gradually I’ve come to see the distinct beauty it presents.” 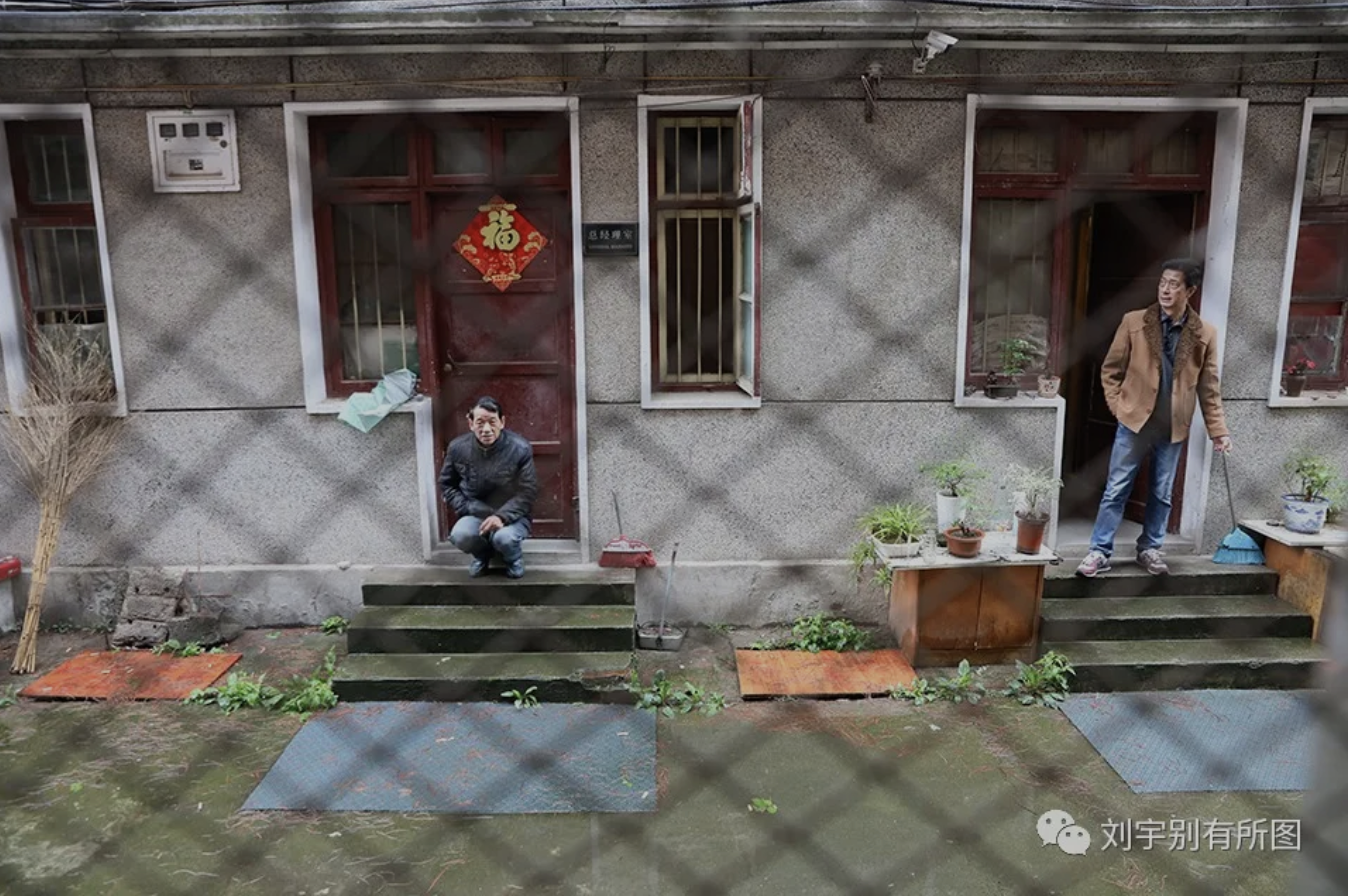 Fu smokes with Xia at the door (Photos: Liu Yu) 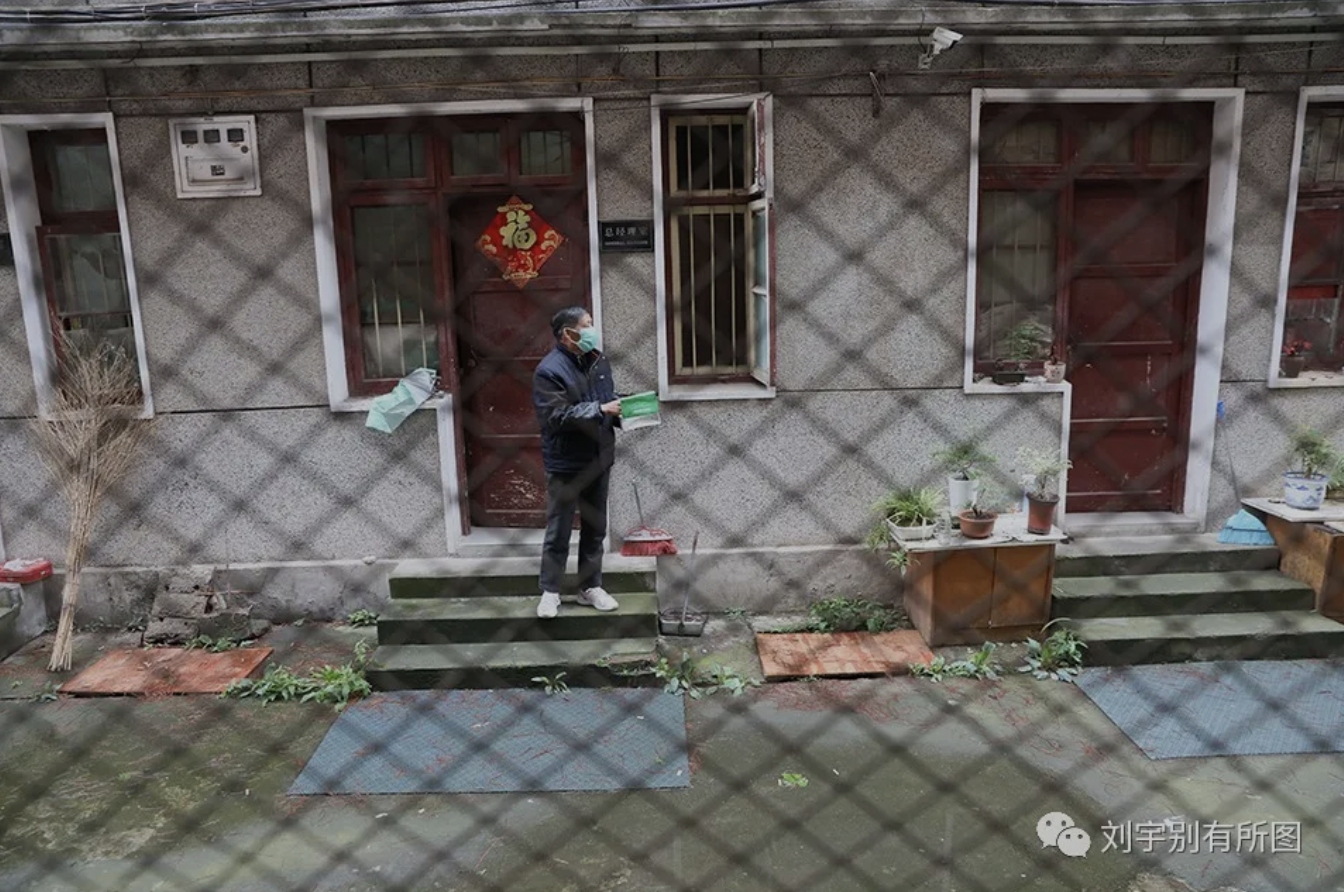 Xia receives a box of masks from his colleagues 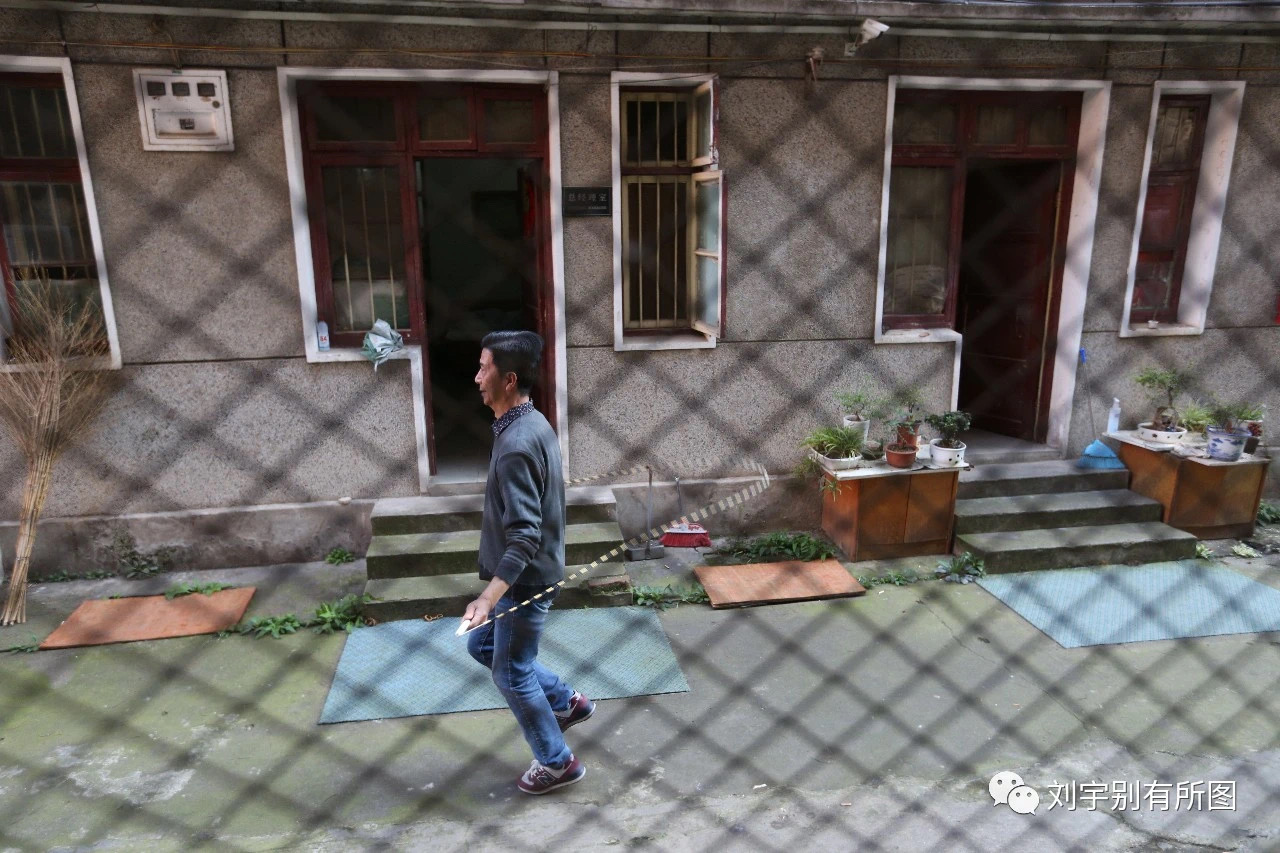 Fu skips in the yard 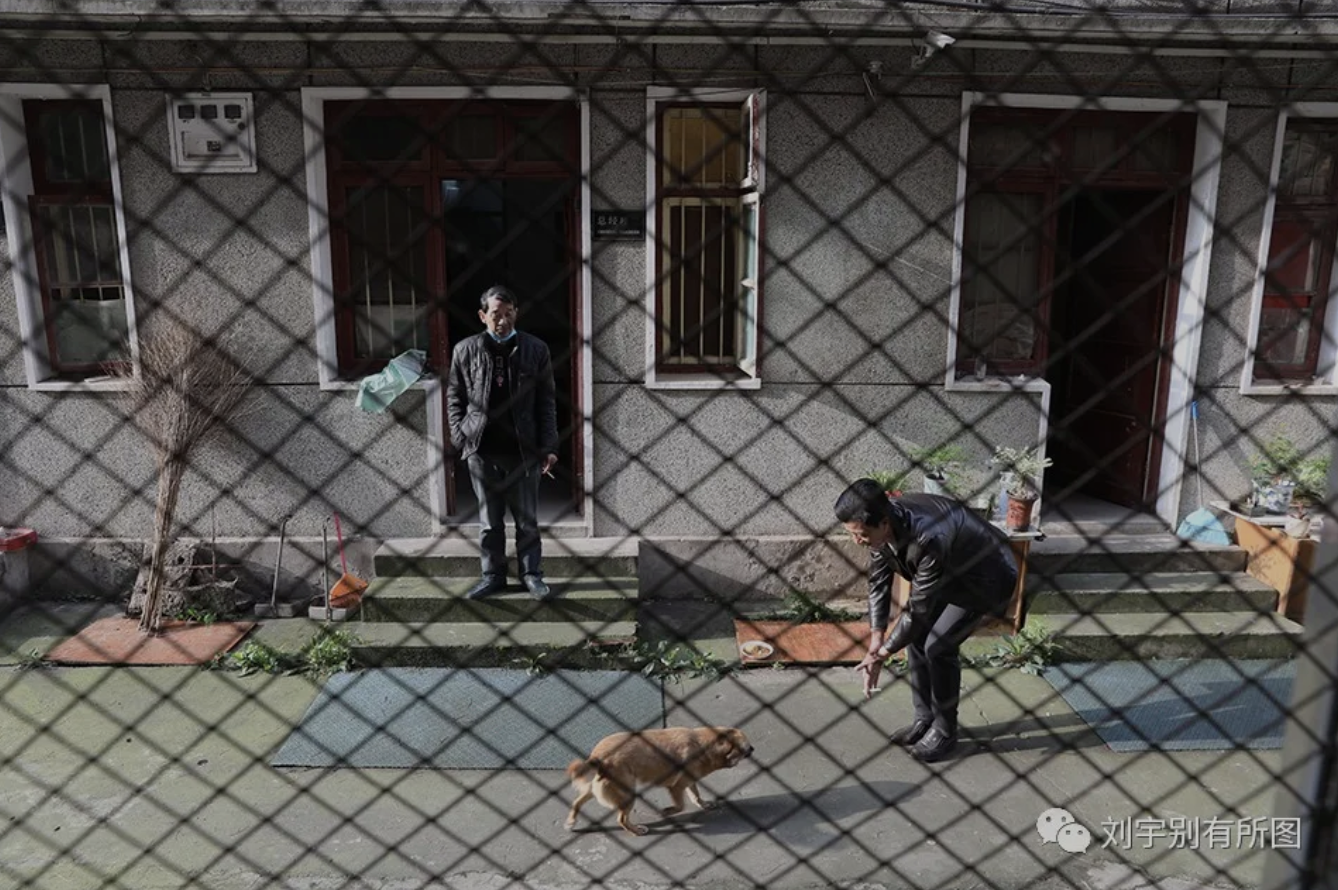 Guniang rushes to Fu whenever he whistles. Three of her children have been taken away. 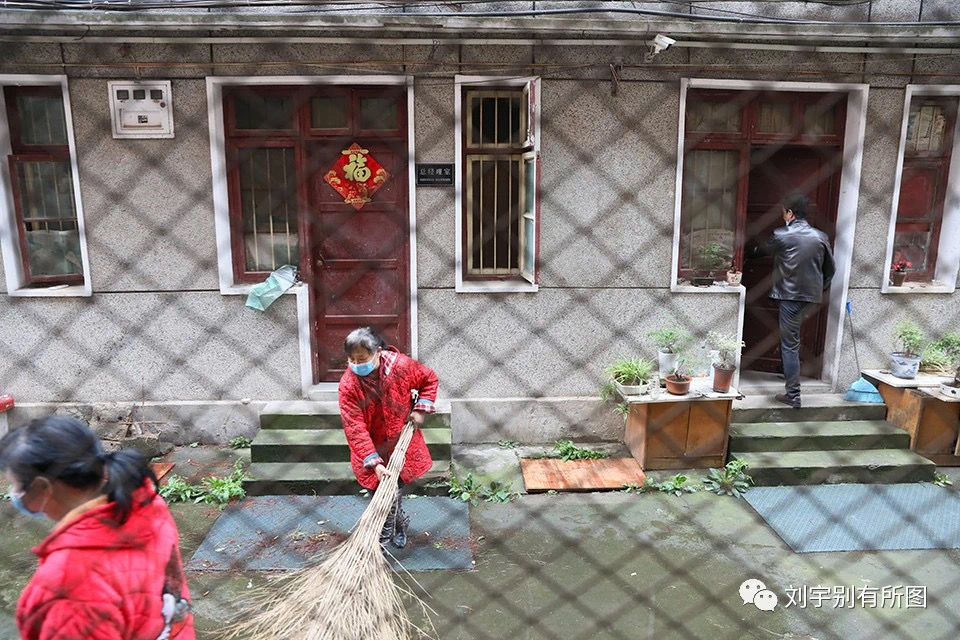 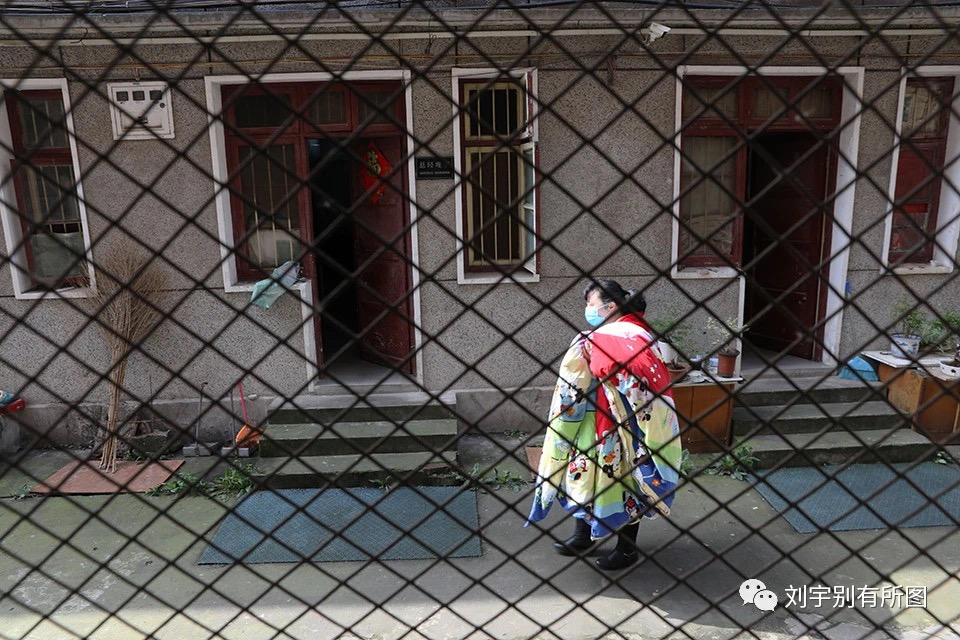 Yi Pinggui spreads her quilt in the sunshine 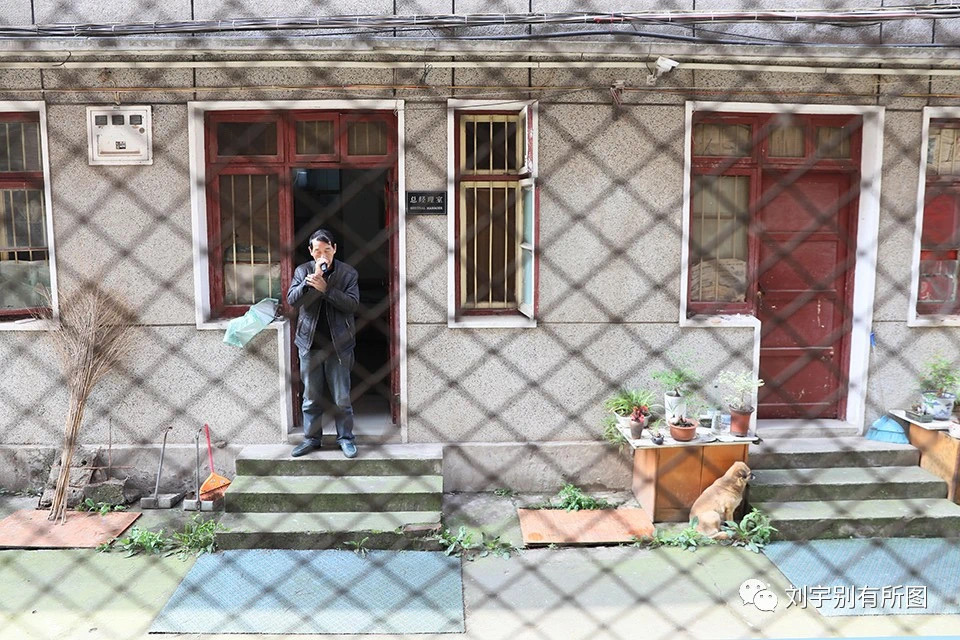 Xia shaves to prepare for work 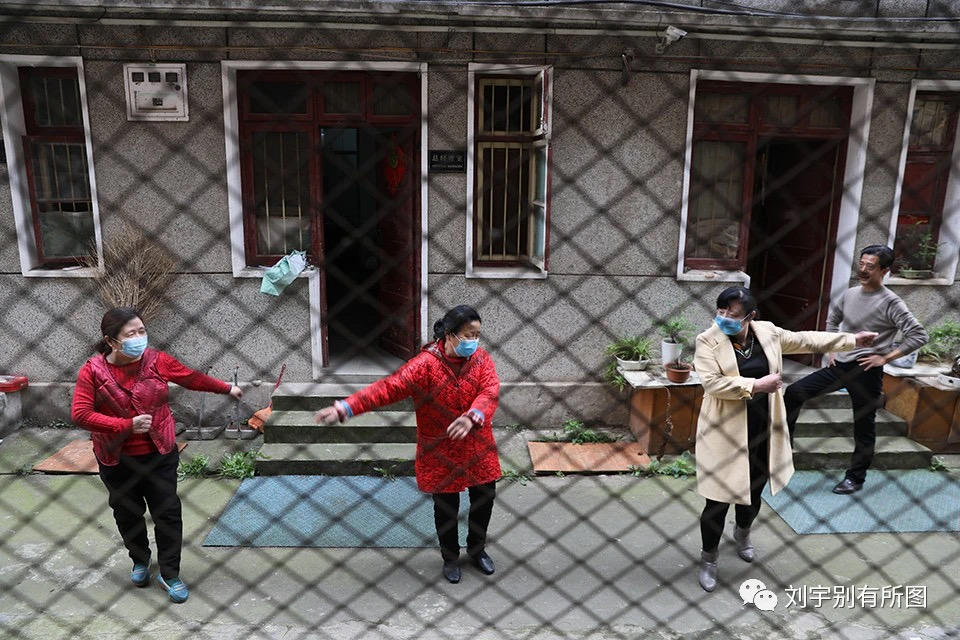 A few days ago, Liu’s camera first got through the grid into the rooms of his neighbors. Let’s follow its visual narration to take a glimpse into Wuhan people’s life during the world-famous lockdown.

Mr. Fu loves dance and music. Living beside him can be a great chance to expand your knowledge about Chinese songs, especially romantic ones. His phone sings non-stop day and night, and most melodies Liu had never known before. Fu used to go to a nearby stadium to dance with people every day, but the COVID-19 outbreak has put a temporary end to this important distraction. He rarely left the dorm after the outbreak worsened, and has since tried various indoor time killers, such as ikebana and online poker games. The items most likely to catch people’s eyes in Fu’s rooms are the pair of mirrors attached to the wall, which are used to practice his dance moves. 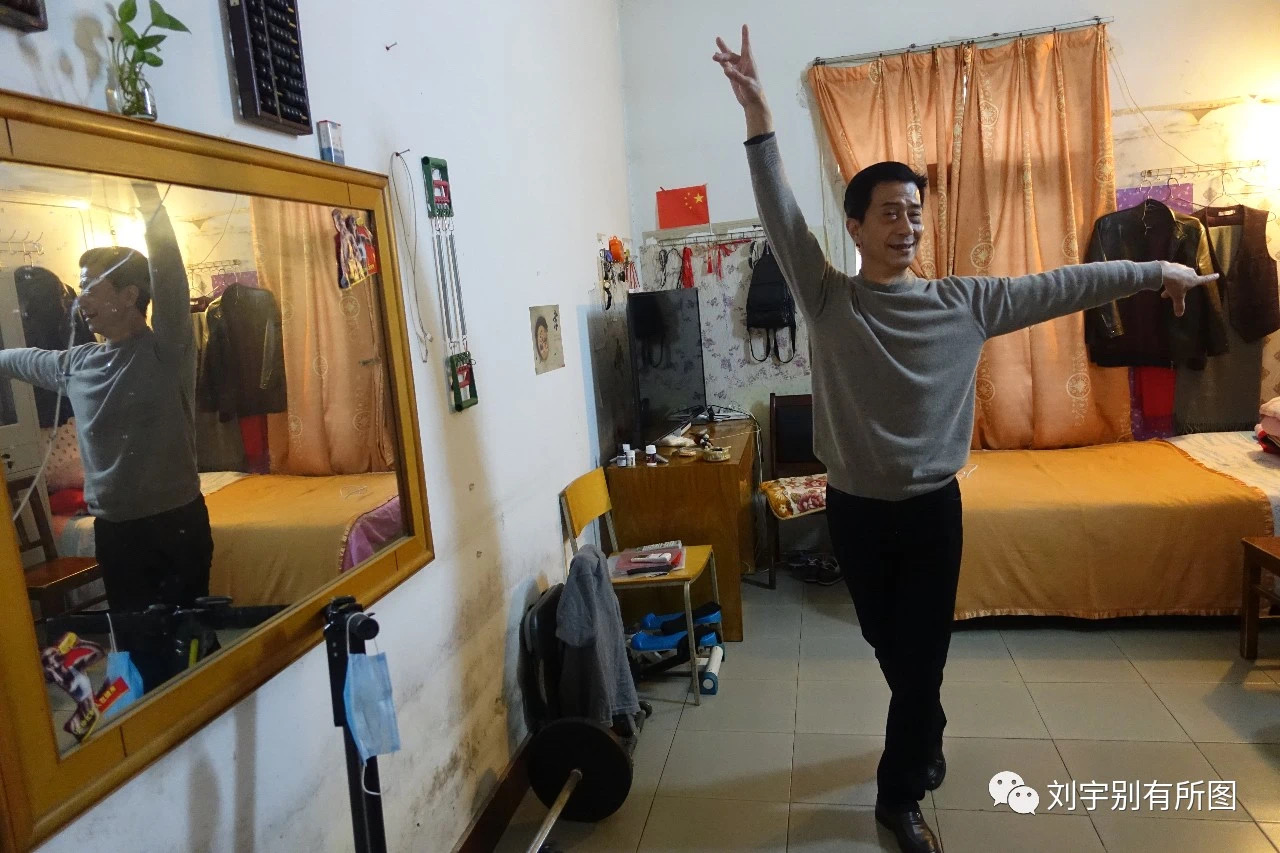 “The virus has never frightened me. The air here is fresh and there is a lake in the backyard. I do think we have to pay attention, but there’s no need to panic. If staying here, I can still contract the virus, then I can only say it’s fate.”

Mr. Fu owns another flat, where his wife lives, looking after his mother. They haven’t seen each other for months, as he can’t go back due to the health identification processes.

However, he’s not in lack of company. There are several stray dogs in the yard. They used to be kept as pets, but for some reason their owners are not around anymore. Fu feeds them every day, treating them as his own, and they follow him wherever he goes. He named one of the female dogs “Guniang”, which means “girl” in Chinese. Once Guniang had a fight with other dogs and came back to give birth to 5 puppies, so Fu pays more attention to her, offering extra milk and eggs. Guniang loves to stick with Fu. Liu often see Fu talking to Guniang in Wuhan dialect, which Liu doesn’t quite understand.

“I was telling her to be a responsible mother and remember to feed her babies.”

A few weeks ago, 3 of the puppies were carried away for barking too much. Fu’s eyes wetted as he told Liu the news.

Mr. Xia lives with his wife. “Have you had your meal yet?” Xia is keen to greet people with this question whenever he comes across them. He used to work as a cook, but not a trained one. When asked about how he got the job without any related background, he brightened smugly: “Because I cook well! I worked for state corporations. People there have had all kinds of food, and they can tell if you are excellent!” According to Fu, he stole the skills from his wife, who used to run a restaurant. 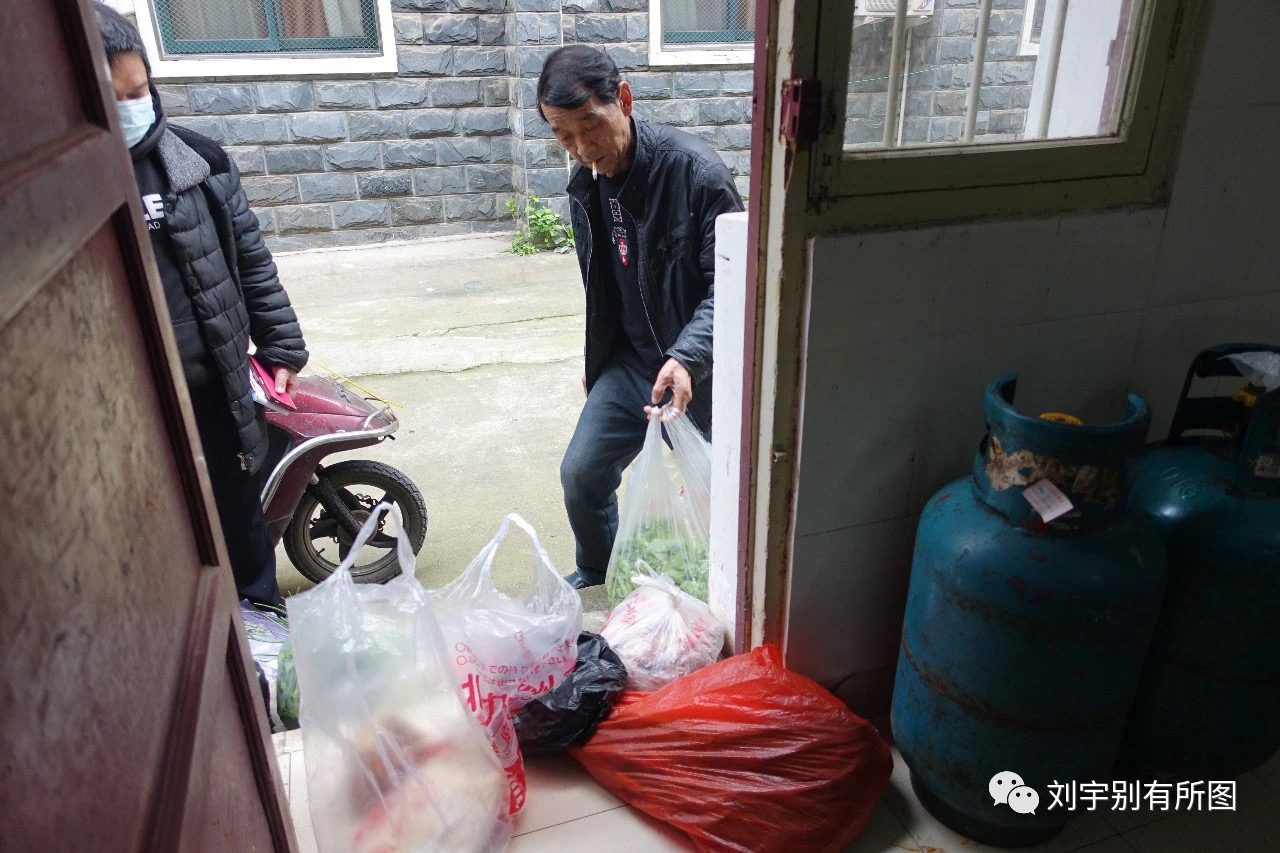 Xia is always willing to help when Liu can’t understand the Wuhan dialect in his interview recordings, but he also seems to have some problems with mandarin.

Xia owns a flat in Xinzhou district, which has reported the fewest number of cases in Wuhan. “It doesn’t really bother me, the fact I can’t go back home. My parents are not around anymore.”

“Fu is no match for me! He sings with his phone while I sing with my friends at karaokes!”

Unlike Fu and Xia, who were approached by Liu, Yi Pinggui found the photographers to share her story. She lives with her sister in a small flat of around six square meters. She has a part time job as a doorkeeper during the day, and at night  she works as a cleaner. Her sister Yi Xiagui has been working here for two years. Yi Pinggui came to this place only two months ago. 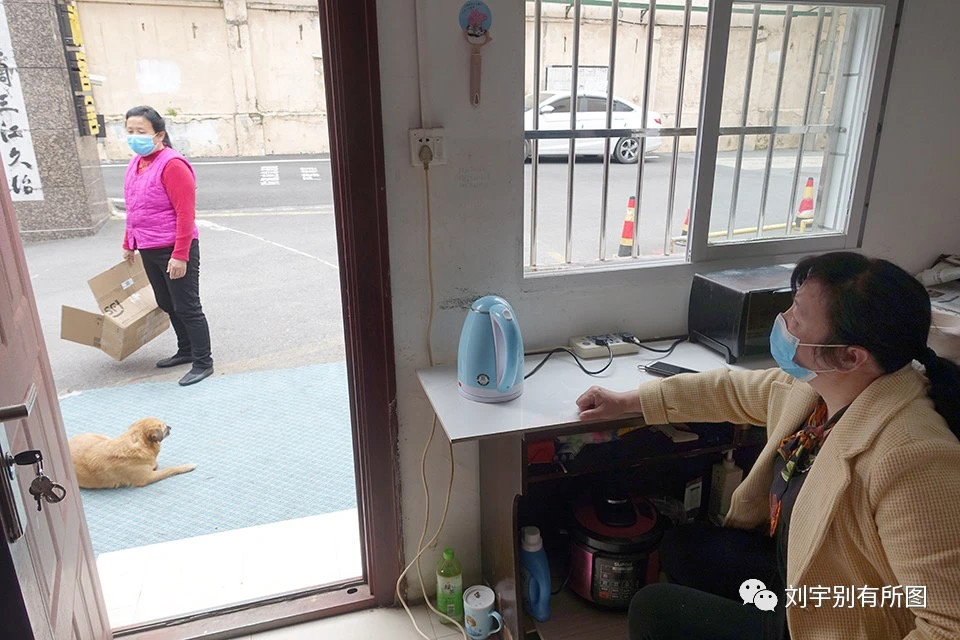 Liu could feel that she had something to tell him when she came over.

The two sisters are both working in block one, but they get the salaries from two different agencies in charge. And the pay isn’t considered fair. The older sister gets paid as usual while Yi Pinggui ‘s salary was cut in half, as, according to the company, there isn’t much work during the outbreak. The process of asking for fairer payments has been quite convoluted, as it involves so many people, and none of them claims to have a say in this affair.

“If they keep evading my inquiries, can I take you to their office to investigate?”