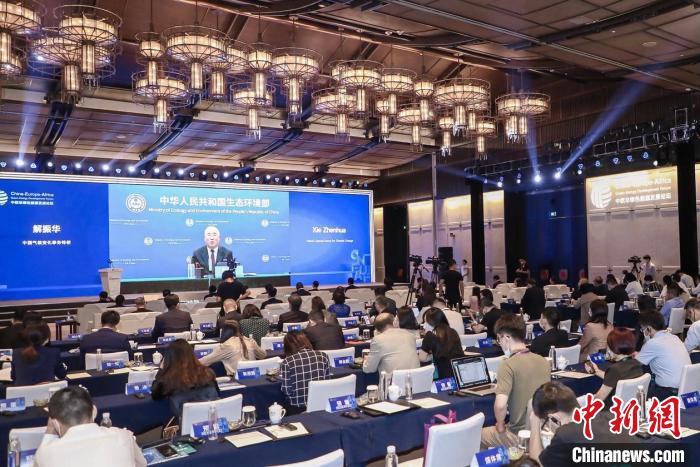 Collaboration and multilateralism will be key to addressing climate change and environmental challenges confronting the world today, said top Chinese officials and foreign diplomats on Wednesday.

"As a developing country, China has actively pushed for the signing of the Paris Agreement on climate change, and consistently followed through on its commitments," Liu said.

"China, Europe and Africa share a lot of consensus on climate change and green development. The three parties should deepen exchanges and cooperation on green economy and clean energy, and jointly pursue green, low-carbon and sustainable development."

Liu made the remarks at the China-Europe-Africa Green Energy Development Forum, held on Sept 7 and 8 in Hangzhou, capital of East China's Zhejiang province, as China prepares to attend the 2022 United Nations Climate Change Conference, or COP27, in Sharm el-Sheikh, Egypt from Nov 6 to 18.

The forum, organized by the China-EU Association, seeks to promote high-quality development in the era of carbon neutrality, and build a China-Europe-Africa green energy development community in response to the myriad challenges posed by climate change.

Various studies show that the number of extreme weather events has grown significantly as a result of climate change. In a 2021 report, the UN's Intergovernmental Panel on Climate Change said that global surface temperatures have increased faster since 1970 than in any other 50-year period over the past 2,000 years, leading to growing extreme heat waves, droughts and flooding.

In 2022, unprecedented heat waves have caused severe droughts in China, the United States, Europe and other parts of the world. Lack of rainfall in the Horn of Africa has put over 22 million people at the risk of starvation, according to the UN's World Food Programme. More recently, deadly floods have ravaged Pakistan, killing more than 1,300 people and leaving thousands homeless.

"In the face of global challenges and crises, no country can stay alone. Multilateralism and win-win cooperation are the only options," Xie Zhenhua, China's special envoy for climate change, said via video link at the forum, echoing Liu's call for the international community to join hands.

"China, the EU and African countries share common ground on the implementation of the Paris Agreement and taking forceful actions," Xie added.

China has been making persistent efforts to achieve the goals of the Paris Agreement and the UN Framework Convention on Climate Change. In September 2020, China pledged to peak carbon dioxide emissions before 2030 and achieve carbon neutrality before 2060. Official figures show that by 2021, China's energy consumption per unit of GDP had dropped by 26.2 percent compared with 2012, equivalent to a reduction of 2.94 billion metric tons of carbon dioxide emissions.

"We need friendly emerging economies like China to partner with South Africa and other African countries in mitigating the impact of our energy transition," said Siyabonga Cwele, South African ambassador to China, who believed China can offer a lot for Africa's green transition in terms of funding, innovative technologies, skills training and management, among other areas.

"If you want to go fast, go alone; if you want to go far, go together," said Nan Cunhui, chairman of the Chint Group, a leading new energy company with a global presence based in Zhejiang, quoting an African proverb at the forum to illustrate the benefits of cooperation.

In the process, policy support such as easier market access and tax incentives will be needed, Nan said, "to encourage more companies to invest in the green energy industry".

Last year, China and Africa issued the Declaration on China-Africa Cooperation on Combating Climate Change, including the launch of a three-year action plan and the further development of green energy, to tackle climate change.