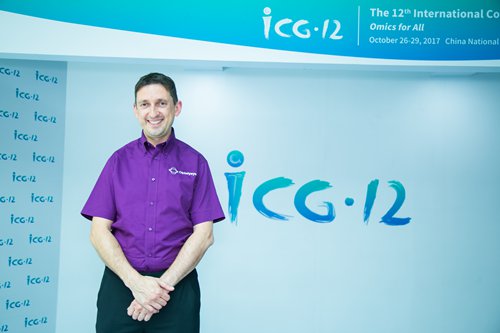 While China has proven itself to be a hotbed of artificial intelligence (AI) development, there are still concerns over the nation's headway in some areas of the new technology. In an attempt to understand the core strength of the nation in optical computing technology, a new but crucial part of an AI-powered world, Global Times reporter Li Qiaoyi (GT) conducted an email interview with Nick New (NN), CEO of Optalysys, a UK-based firm that is commercializing optical coprocessors for AI and deep learning.

The coprocessor has been tested with several bioinformatics organizations including Zealquest in China to apply the optical processing technology to genetic sequence alignment and assembly. This can help find matches in very large reference datasets of smaller DNA strings.

Although we see many applications for our optical processors, our primary focus is in Deep Learning and specifically Convolutional Neural Networks (CNNs). CNNs are used in many AI applications such as autonomous vehicles, facial recognition, image recognition and voice recognition. The first coprocessor is able to perform multi-layer convolutional neural networks and the next generation product will provide a platform to run these at significantly faster speeds than conventional computing methods.

GT: Do you think optical processors have the potential to replace conventional ones? And why and when will it happen?

NN: Optical processors offer the ability to perform certain types of mathematical operations extremely efficiently. In comparison with conventional processors they offer a massive scaling in processing capability at a fraction of the power consumed by conventional electronic processors.

The type of calculation our optical processors offer is exactly what is required to advance image-based Deep Learning models. These are truly parallel processes, performing crucial Fourier transform-based functions, which are the basis of large deep learning models that are currently limited by electronic processors.

We see this technology replacing conventional and specialist processors such as Graphics Processing Units (GPUs) for these specific tasks while conventional computing resources are focused on other tasks for which they are better suited.

GT: China and the US are competing for AI leadership and China, in particular, is heavily committed to basic R&D on AI. Which one has made more headway in optical computing technology, and which has more potential to make the best use of the technology?

NN: Optical computing in AI is a very new area of development for both China and the US. In recent times there has been a surge in the development of optical approaches, with major technology firms from both countries investing heavily in both start-ups and in their own internal development.

Baidu, for example has recently invested in a US-based company developing an integrated photonics-based approach to matrix multiplication. We at Optalysys are working with major tech companies in China, Japan and the US and from our experience China has an unstoppable ambition toward incorporating AI into everything it does and becoming the world leader.

GT: How innovative is China and what areas of improvement should the nation focus on in the age of AI?

NN: China has a rich pedigree of bringing innovations to the world. It has also established itself as a global manufacturing center, with an in-built ambition to be the world leader in many technological breakthroughs.

Because of its huge success in international trade in recent years, China now has the financial and technical power to use its influence to bring in global expertise and technologies. The computing industry is facing huge challenges to meet the processing demands of AI, in both cloud and server set ups, and in local nodes such as autonomous vehicles.

Optical processing offers a solution to these demands and China must be prepared to adopt such new technologies if it is to truly become the leading force in AI.

GT: It has been argued that the lack of people skilled in AI in China is a major impediment to the nation's ambitions in the sector. Do you agree and what should China do to build a talent pool that's big enough to match its AI ambitions?

NN: China must look to bring in the skills of the international community in order to become the leading force in AI. To do this it is crucial to create partnerships and development programs with the leading universities and companies around the world.

Optalysys sees China not just as a huge market in which to sell its optical technology, but also as a key development partner, for both now and in the future.

This is why we have made a large commitment to establishing links and developing relationships with the top technology companies and universities. We see a very bright future ahead where we are closely aligned with China's ambitions in AI.

GT: China is pushing for indigenous innovation and homegrown chips are a significant part of the tech push. In terms of genuine technological advancements, is it time for massive use of homegrown chips, and in which specific areas are China's indigenous chips not yet powerful enough?

NN: China is already producing some of the most powerful AI chips, particularly for the mobile phone sector, such as the Huawei Kirin 970, which has a dedicated neural processing unit. It is clearly advantageous for China to produce its own chips as part of the development of its own AI systems.

However, China's vision to invest in and develop technologies on the global stage is crucial to keep ahead of its competitors. The Optalysys processors provide a capability that does not exist within electronics processors such as the Kirin series.

Such capabilities will be required if AI is to reach its full potential, so it is very important for China to continue to work with other countries as well as to look to develop its own technologies.

GT: To what extent does progress in optical computing technology matter for the race to develop artificial intelligence?

NN: The implementation of optical computing technology is absolutely crucial for AI to reach its full potential. Electronic processing is approaching fundamental limitations, which means that it cannot continue to meet the demands of AI.

Without alternative processing technologies that offer radically different ways to process large amounts of data quickly and efficiently, successfully implementing larger AI models will prove unviable. Even the most advanced of today's AI models still only offer a fraction of the processing power of large sentient systems such as the human brain.

For image-based models, such as those used in autonomous vehicles and facial recognition, Optical Computing holds the key to allowing artificial intelligence to reach its full potential and unlike other alternative computing solutions, such as quantum, it is far closer to being marketable.