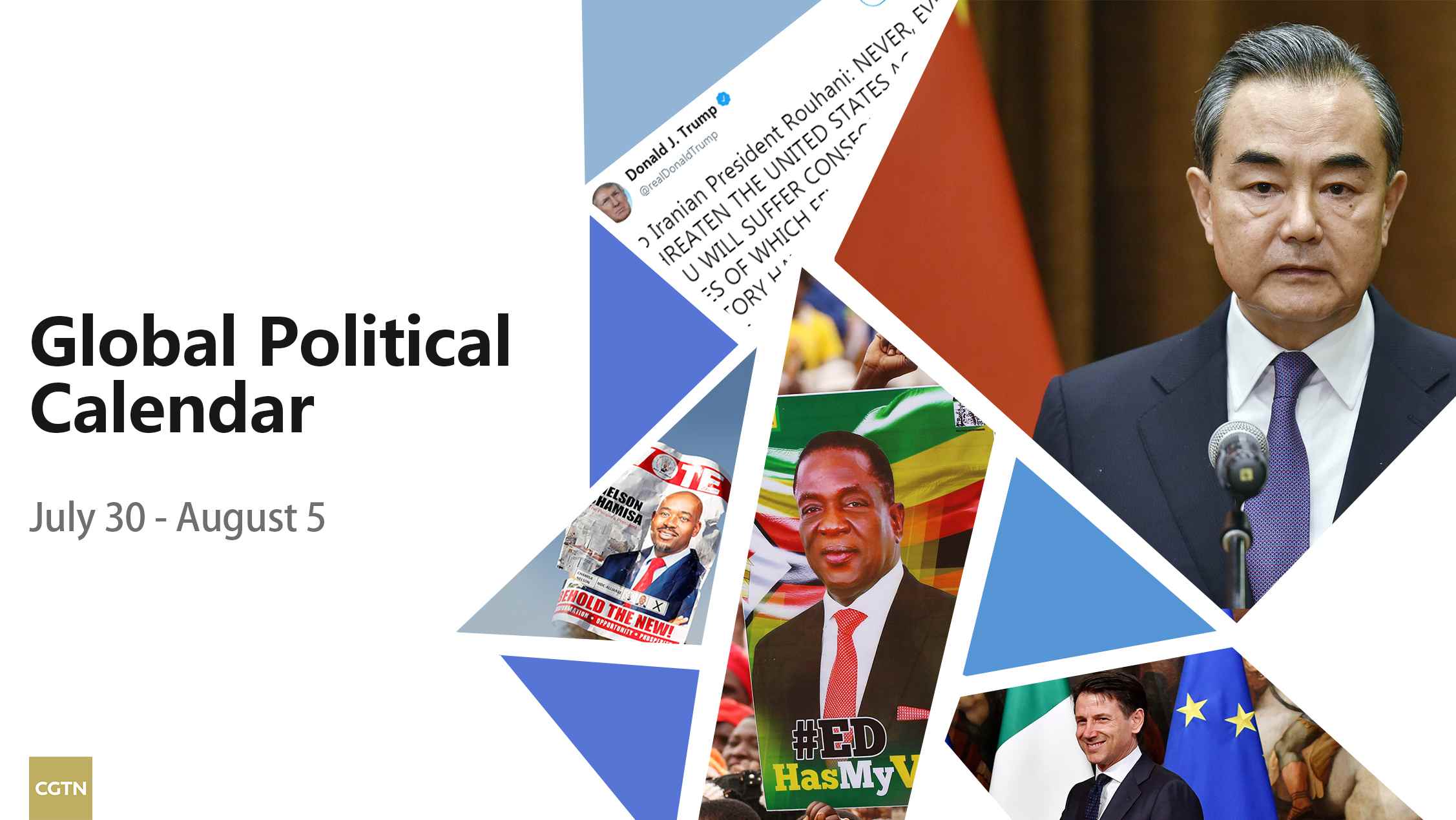 Chinese Foreign Minister Wang Yi hosts his British counterpart before flying to Malaysia and then Singapore for talks with ASEAN, Zimbabwe goes to the polls for the first time in the post-Mugabe era, the

Italian prime minister heads to the White House, and US-Iran strains will be under the microscope.

A busy week lies ahead for Chinese Foreign Minister Wang Yi. He will host new British Foreign Secretary Jeremy Hunt in Beijing, before heading to Malaysia to meet with Prime Minister Mahathir bin Mohamad. Wang then travels to Singapore to meet with President Halimah Yacob and Prime Minister Lee Hsien Loong. In Singapore, in the 15th anniversary year of the ASEAN-China strategic partnership, Wang will attend the Foreign Ministers' Meetings on ASEAN Plus One, ASEAN Plus Three, East Asia Summit and ASEAN Regional Forum.

The first elections in Zimbabwe since Robert Mugabe was replaced by Emmerson Mnangagwa take place on Monday. The ruling ZANU-PF is in a battle with the opposition MDC for control of parliament, while Mnangagwa's main challenger for the presidency is Nelson Chamisa. International election observers will be on hand for polls which could be decisive in pulling in foreign investment. A close eye will also be kept on reaction to Sunday's elections in Mali and Cambodia, while the fallout from last week's poll in Pakistan will continue.

The Trump trade tariffs are never far from the headlines, and US-EU relations will remain in the spotlight when Italian Prime Minister Giuseppe Conte heads to Washington. His government may share common ground with Trump on immigration, but, like France, it is unlikely to be amenable to the kind of deal outlined following the US president's talks with EU leaders last week. Ahead of Hunt's trip to Beijing, the Chinese Foreign Ministry called for China and Britain to "send out positive and upbeat messages of upholding the rule-based international order."

The first tranche of US sanctions on Iran – suspended under the Joint Comprehensive Plan Of Action – is due to be reimposed on August 6, and last week there was a ratcheting up of tensions when Trump tweeted an ALL-CAPS warning to Iranian President Hassan Rouhani. Those tensions are likely to continue this week, especially given the Trump administration's revelation that it is trying to create an 'Arab NATO' to counter Tehran's influence.

Tuesday: Wang Yi heads to Malaysia for a two-day visit, during which he meets with new Prime Minister Mahathir Mohamad, Japan's foreign and defense ministers are due to meet their Russian counterparts in Moscow, and former Trump campaign chief Paul Manafort goes on trial for tax fraud.

Wednesday: China marks the 91st founding anniversary of the People's Liberation Army, Wang Yi heads to Singapore to meet with President Halimah Yacob and Prime Minister Lee Hsien Loong as well as take part in ASEAN discussions, Bhutan's lower house of parliament dissolves ahead of general elections, and former warlord and ex-vice president Jean-Pierre Bemba returns to the Democratic Republic of Congo after 11 years ahead of December elections.

Thursday: Ivan Duque is set to be inaugurated as Colombian president, and the opening ceremony of the 51st ASEAN Foreign Ministers' Meeting takes place in Singapore.

Friday: The US monthly trade balance data is published.

Sunday: South Sudanese rivals President Salva Kiir and opposition leader Riek Machar are due in Khartoum to formally sign a power-sharing deal which was initialed on July 25.