The Global Think Tanks Forum 2018 lifted its curtain on Nov. 22 in Chengdu, the capital of China's southwestern province of Sichuan. The forum drew 120 attendees including think tank executives, leading experts, scholars and media representatives from 18 countries and regions to discuss future development of think tanks and their contribution to global governance. 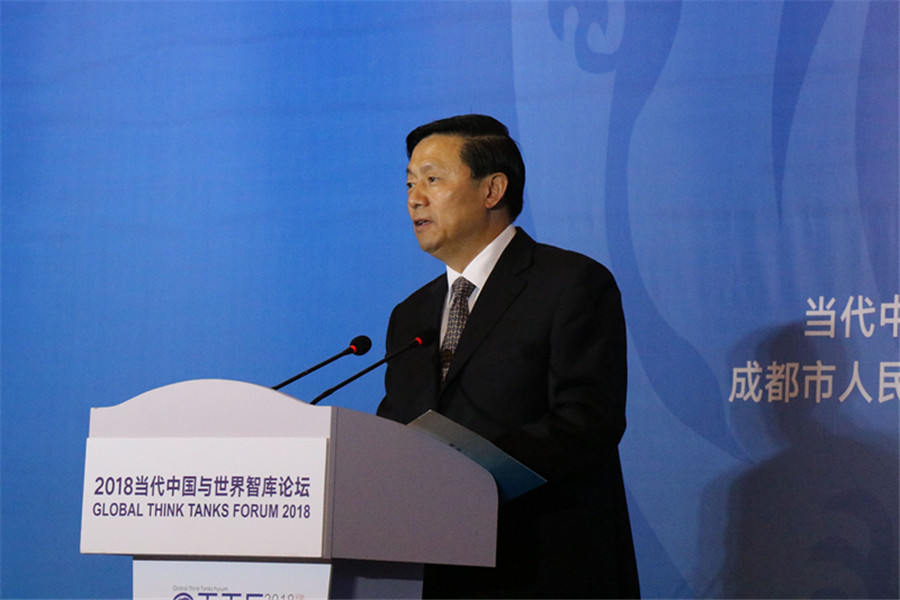 With the theme of "Cooperation and Development of Think Tanks and Innovation in Global Governance," the forum features opening and closing ceremonies, the main forum, and three parallel discussions focusing on the Belt and Road, think tank cooperation, and China's reform and opening up.

Speaking at the opening ceremony, Guo Weimin, vice minister of the State Council Information Office of China, encouraged all think tanks to enhance their research capacity and provide forward-looking intellectual thinking in a world faced with difficulties in global governance and various uncertainties.

He also said that think tanks should increase exchanges and cooperation, facilitate policy coordination and people-to-people exchanges among different countries, stimulate the dynamism for future growth through their intellectual researches and findings, and deliver new thoughts and ideas for social development.

John Ross, former director of economic and business policy of London and senior fellow of Chongyang Institute for Financial Studies at Renmin University of China, said the role of think tanks is to "seek truth from facts." He called on those organizations to increase their research efforts, make thorough exchanges, and provide professional information and analysis-based suggestions for governments to avoid misjudgment and wrong calculations.

Zhou Mingwei, president of the Translators Association of China and former president of China International Publishing Group, said he agrees that think tanks need further exchanges and cooperation, but the cooperation should be engaged based on different or diversified ideas. He said that cooperation among think tanks should create new scopes and areas in the face of uncertainties in global governance and non-traditional security challenges.

Dmitry Baryshnikov, vice dean of the School of International Relations at Saint-Petersburg State University in Russia, said that most of the acting think tanks are effective and responsive to the public and private requests concerning the national vision of international cooperation development.

Baryshnikov said the next step in intellectual support of inter-regional cooperation could be done in establishing joint think tanks, which would act autonomously, on a mixed financial basis when involving international experts of needed specialization.

He said those joint think tanks should focus on international fundamental and applied researches, widely adopt new information and research technologies in elaborating problems and sharing results of expertise, be visible to citizens, and establish close ties with the media for better understanding and support of joint think tank activities.