Countries need to enhance international cooperation in fighting extremism, which is a global problem that no country is immune from, according to counterterrorism experts. 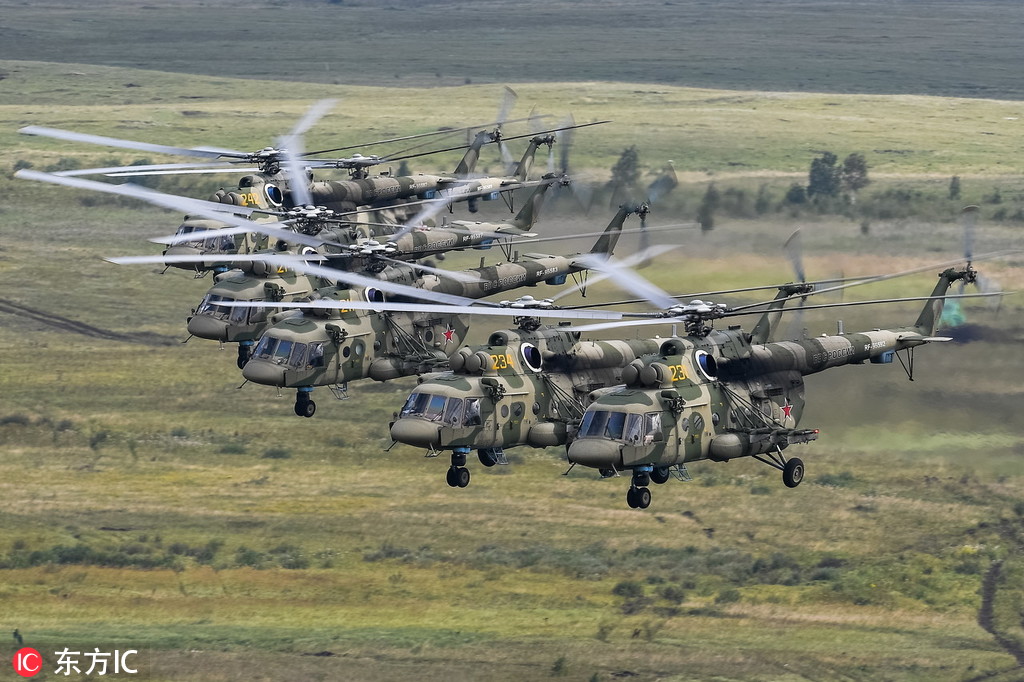 Tansport and attack helicopters in the final stage of the Peace Mission 2018 joint counterterrorism exercises conducted by the SCO member states on the Cherbakul Training Ground in Chelyabinsk region, Russia, August 29, 2018.(Photo: IC)

Also, sharing practical experiences about preventing young people from becoming extremists and later carrying out terrorist attacks is more important than ever, the experts said.

"Member countries of the Shanghai Cooperation Organization have agreed that we need to attach great importance to measures to curb the spread of extremism online that particularly targets young people between 18 and 30," Nurlan Akkoshkarov, deputy secretary-general of the Shanghai Cooperation Organization Secretariat, said during an international symposium on counter-extremism.

More than 60 officials, diplomats and experts participated in the symposium held by the China Association of Friendship in Beijing on Friday.

The SCO has eight member states, including China, Russia, Kazakhstan, India and Pakistan, and many members have suffered from extremism, terrorism and separatism that have led to many violent attacks. That is why more than 60 percent of the SCO's 600 cooperation mechanisms pertain to jointly combating extremism, terrorism and separatism, Akkoshkarov said.

Extremism is the theoretical support of terrorism, while terrorism is often the result of extremism, so extremists and terrorists share a common ideology and their networks are codependent. said Liu Jie, deputy director of the executive committee of the SCO's regional anti-terrorist structure, adding that they have become the common enemy of mankind.

Since some terrorist groups in Syria and Afghanistan that carried out frequent armed attacks were hit hard by counterterrorism forces in recent years, they have shifted their focus to using extremist forces to recruit members, especially via the internet, and setting up new bases worldwide, Liu said.

"Different countries need to seek common ground while setting aside differences to fight extremism and terrorism and establish a worldwide prevention and cooperation mechanism," he added.

Javid Ahmad Qaem, Afghanistan's ambassador to China, said Afghan forces have been fighting the East Turkestan Islamic Movement, which is a terrorist organization that poses a major threat to China as it seeks independence for the Xinjiang Uygur autonomous region.

"Although the presence of ETIM in the country is weak and only exists in border areas with China, it is still our target during counterterrorism missions," Qaem said. He added that many Afghan soldiers had lost their lives in the fight against the movement, but such missions would continue because "we must defeat all terrorist forces".

In Kyrgyzstan, for example, extremists' confessions are used to educate others about the harm of following extremism. In Uzbekistan, people can learn what religion is all about from television programs sanctioned by the government, Osmonaliev said.

Xinjiang, which borders Kyrgyzstan and Afghanistan, has been China's main battleground against extremism and terrorism. No terrorist incident has happened in the region for three years since a series of countermeasures were introduced, including the establishment of vocational education and training centers.