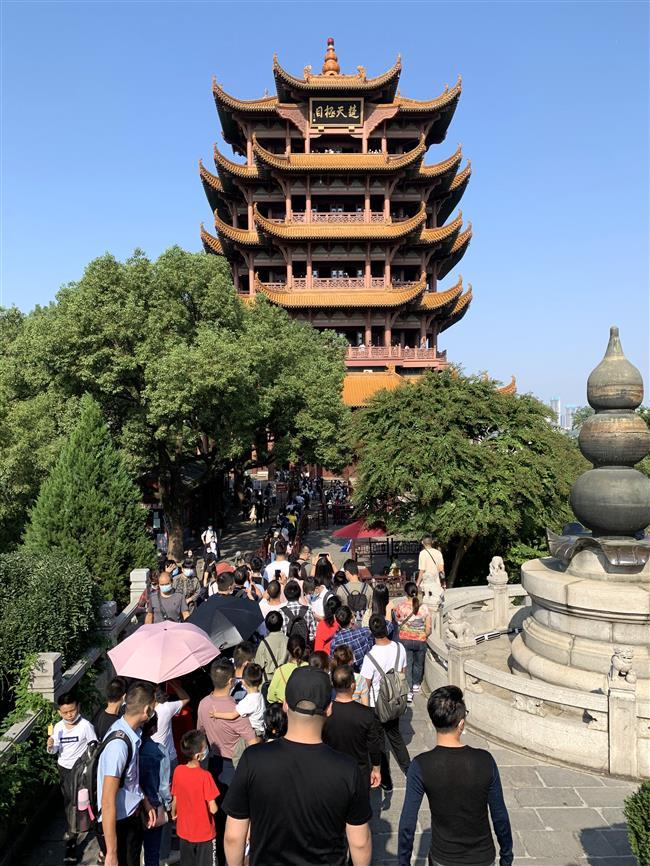 Tourists visit the Yellow Crane Tower in Wuhan during the Golden Week holiday. The city was once hit hard by the coronavirus. (Photo: Xinhua)

China’s eight-day Golden Week holiday has reflected the country’s impressive recovery and its economic bounce back from the COVID-19 epidemic, with more than half a billion people on the move for a long-awaited vacation and factories stepping up production to complete new orders.

Amid regular epidemic control, the peak season of tourism-driven consumption boom for the National Day celebration that coincided with the traditional Mid-Autumn Festival this year was also a test field for China’s new economic development pattern of “dual circulation.”

As a pivotal part of the “dual circulation” floated by China’s top leadership in May that encourages domestic and overseas markets to reinforce each other, the country’s enormous market and expanding domestic demand during the holiday has gathered sound momentum for China’s economy to further perk up.

The total number of domestic tourists nationwide was previously expected to reach 550 million during the holiday, while statistics from the Ministry of Culture and Tourism showed that a sizable 637 million domestic tourist visits were made in the eight days, 79 percent of last year’s number.

China’s transport operators were seeing a surge in return trips yesterday as the holiday drew to a close. Yesterday, 13 million train trips were expected, with 1,234 additional trains put into operation to handle the spike in trips involving tourism and family visits, according to the China State Railway Group Co.

Daily train trips across the country had exceeded 10 million for eight straight days by Wednesday, the railway operator said.

In Wuhan, the city once hard hit by the coronavirus, visitors ambled by the Yellow Crane Tower as the historic building launched night tours for the first time since its opening to the public in 1985 after reconstruction. The landmark topped the “country’s hottest scenic spots” rankings by China’s largest online travel agency Trip.com Group.

“The Wuhan Yangtze River Bridge is the same as usual, so is the roaring Yangtze flowing eastward,” Wang Yu, a tourist from Hubei’s Enshi City, said while enjoying a distant view on top of the tower. “What’s different is the heavy traffic on the bridge and the passing cargo ships on the river. Wuhan returns to life!”

In Beijing, more than 90,000 people, standing in the drizzling autumn rain, gathered at Tian’anmen Square on October 1 and burst into cheers as the five-starred red flag was hoisted to the top of the flagpole, accompanied by the national anthem.

Data from Alibaba’s travel agency Fliggy showed that stimulated by the company’s 10-billion-yuan subsidy campaign and coupons introduced by local governments to revive tourism, hotel bookings nationwide surged by more than 50 percent year on year during the holiday, while both air ticket and scenic spot bookings rose by 16 percent year on year.

“In any year, the outlay of the weeklong holiday is a closely watched barometer of the country’s economic health,” the New York Times reported, noting that this year’s holiday offered “the clearest measure yet of China’s recovery from the pandemic.”

The huge consumption potential during the Golden Week will not only accelerate the recovery of China’s domestic economy but also drive imports and investment from other countries, as the booming “holiday economy” fuels internal circulation and promotes external circulation at the same time, offering a strong boost to global trade and the world economy.